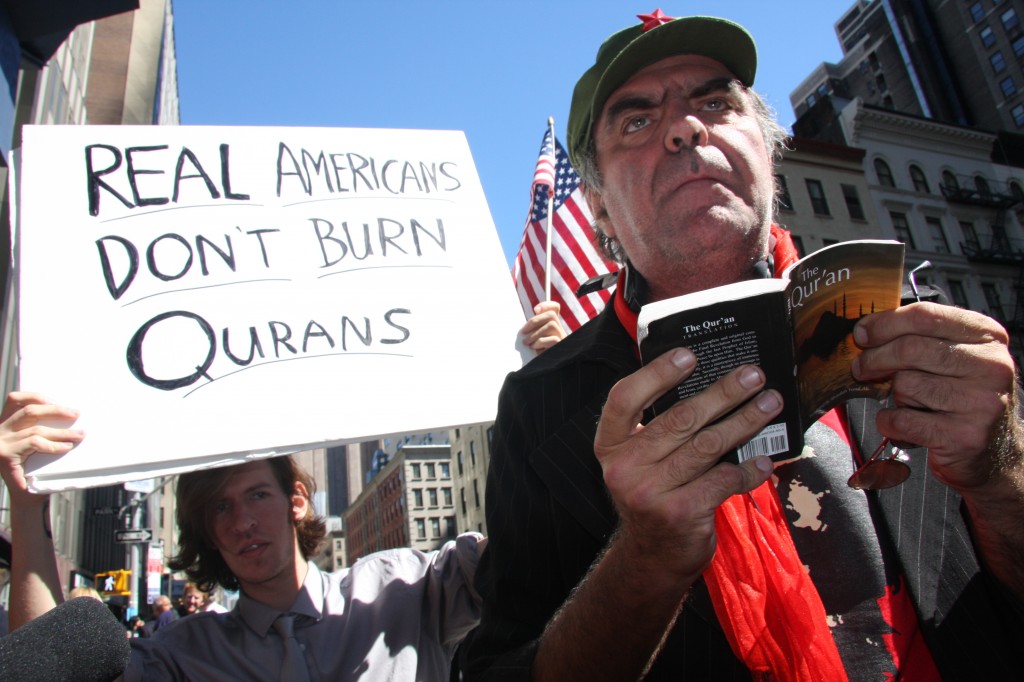 A supporter of the proposed Park51 Islamic cultural center reads from the Quran two blocks from Ground Zero on Sept. 11, 2010. Photo by Jonathan Walczak

As Americans marked the ninth anniversary of the 9/11 attacks, a man in a dark-blue polo shirt pulled out a Quran two blocks from Ground Zero, ripped out clumps of pages and lit them on fire.

He was instantly mobbed by the press, and police officers moved in less than a minute later, whisking him away as charred pieces of paper fluttered off in the wind.

It was a visceral sign of how several controversies — including a proposed Islamic cultural center near Ground Zero and a Florida pastor’s plan to burn hundreds of Qurans — politicized a solemn anniversary.

At the corner of Park Place and Church Street, where the unidentified man burned the Quran, crowd members debated demonstrators, including a supporter of the Park51 cultural center. When several people challenged him, he called them fascists and kept speaking.

“It’s not a crime to hate the people who killed your loved ones,” a passing firefighter called out.

Earlier in the day, dignitaries, including Vice President Joe Biden, attended a ceremony in Zucotti Park. For several hours, family members read the names of the dead, sometimes crying as their voices boomed through loudspeakers.

Thousands of people gathered across the street to mark the occasion amid high security, flags and protesters. For most of the morning, a Mennonite church choir sang Christian songs behind the crowd.

“It’s a sacred place because of all the deaths here, and we just wanted to come and share love and peace with the people who are mourning here,” said Doreen Kurtz, 24, a member of the church who wore a long, flowing dress and a prayer cap. 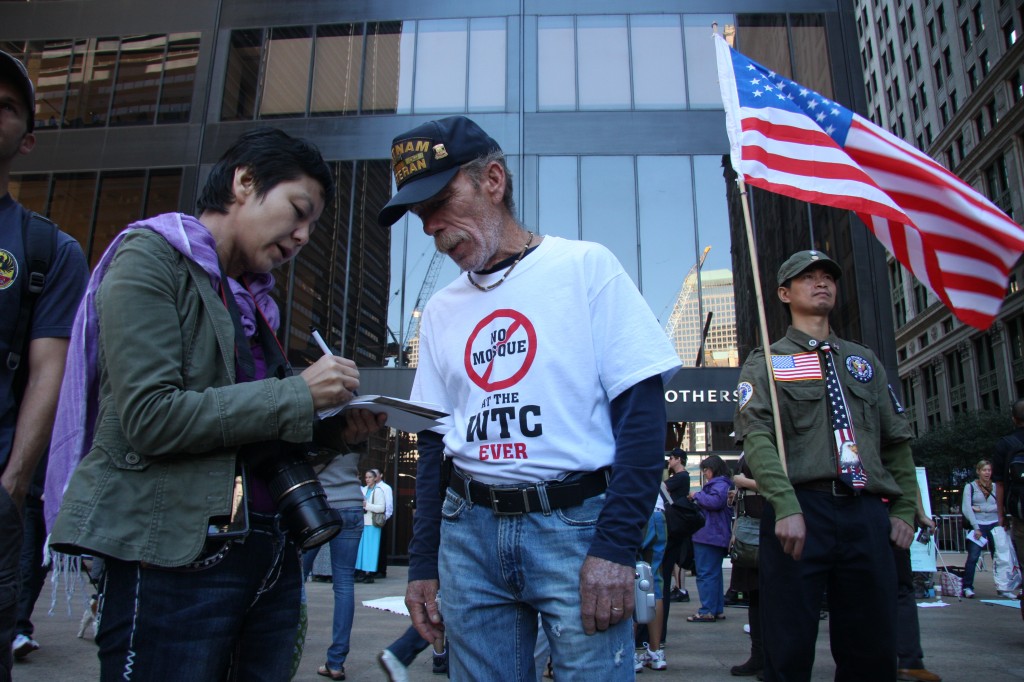 Jimmy Bacolo, 62, center, a Staten Island resident and opponent of the Park51 Islamic cultural center, speaks to a reporter across the street from the 9/11 memorial on Sept. 11, 2010. Photo by Jonathan Walczak

Although Terry Jones, the Florida pastor who had planned to burn Qurans, called off the burning, emotions still ran high, in part because a final resolution has yet to be reached regarding the proposed cultural center.

Several blocks surrounding Ground Zero were cordoned off, with volunteers in orange caps limiting entrance to family members of the dead, dignitaries, law enforcement and some members of the press.

Jimmy Bacolo, 62, a Staten Island resident and Vietnam veteran, said he is still angry about the attacks, and is especially incensed by the center.

“There is no such thing as ‘forgive and forget’ when you take a civilian aircraft with civilian people and use them as weapons,” Bacolo said. “Had I been in the White House on 9/11, the whole Middle East would have been incinerated — every one of them, men women and children.”

Ayesha Khan, a documentary filmmaker and Manhattan resident, said this is the first time she’s been in the city on Sept. 11 in nine years.

“I don’t want to be here,” said Khan, a Muslim. “It’s too painful. But this is too important. They need to understand I’m a New Yorker, too.”

Great photography, even better article. Keep up the good work Jon! I must say you presented both sides very well. In a time of politicized media, I do believe you walk the fine line perfectly. Great job.