At her Las Vegas commitment ceremony to her partner Jamie last year, LeAnna Bradley wore a white floor length gown with lace trimming and a beaded train. Her red hair was coiffed in an updo, crowned with a tiara. The fact that her sheer sleeves did little to hide her many tattoos, or that her carefully set curls imperfectly disguised a partially receding hairline did little to dampen her grin. Bradley, a 37-year veteran of the armed services, likes to say she feels like someone 20 years younger.

But Bradley hasn’t always been so carefree. For most of her life, the highly decorated Lieutenant, born Donald Daryl Alfred, felt like a woman trapped in the body of a man. For six decades Alfred struggled with feelings of confusion and isolation associated with the gender struggle. Two failed marriages and a pair of Purple Hearts later, Bradley’s struggle culminated in her 1997 gender reassignment surgery, an operation that resulted in the completion of Bradley’s “real self.”

Performed in Thailand, the surgeries — including various implants and facial reconstructions — were like the resetting of Bradley’s biological clock. “I really felt that I was a woman all those years,” Bradley said. “I really wanted to be a female.” And finally, at the age of 60, she could say she truly was one.

Although now content with her new life, Bradley’s childhood and early military service was riddled by molestation and abuse, both at the hands of family members and servicemen. Her parents refused to recognize her identity struggles, adding to her confusion by writing off any youthful effeminacy as merely a fad.

“I really didn’t know which way I was going or which way I was headed,” she said. “Twice in Vietnam I thought about suicide. By the time I retired [from the military] I was pretty well beaten up and bullied.”

Bradley’s experiences are shared by more American veterans than either the public or the military publicly acknowledges. While exact numbers have not yet been determined, Monica Helms, president of the Transgender American Veterans Association (TAVA) estimates that just as 13 percent of Americans in the U.S. are veterans of the armed service, approximately the same percentage of this country’s transgenders are veterans as well. She added that at transgender gatherings and conferences, veterans constitute a far greater than 13 percent of the attendees.

Helms said there are several reasons why transgender or transsexual people could be attracted to the military in proportionally higher numbers.

“Some transgenders join the military to “get cured,” Helms said. “They think, ‘The army will make a man out of me.’ Or women will join because you can do things that are more masculine. [Transgenders] can hide who they are or be able to express who they are in a society that accepts those types of behaviors.”

Following the recent, yet not fully enacted repeal of the military’s ban on gay and lesbian service members, advocates like Helms are trying to shift the focus to the ‘T’ (for transgender) in the LGBT alphabet soup. He considers this the final frontier in terms of military discrimination; transgender status and “gender identity disorder” are still automatic disqualification from military service.

Helms said that in her capacity as a leader and co-founder of TAVA, she fields numerous complaints about the treatment of transgender veterans, especially by the Veterans Association Health Department.

“Transgendered people are discriminated against by the VA,” Helms said. “They are denied service, misgendered on purpose. Just a whole series of things happen.”

A 2007 study commissioned by TAVA and The Palm Center, a Southern California public policy think tank, found that of the 827 respondents, nearly one third reported “having experienced some form of discrimination in the workplace.”

In addition, “Respondents reported organizational discrimination at the VA in a lack of clear and consistent practice, with little support of gender transition. …there were many reports of interpersonal discrimination, via lack of respect from VA doctors, non-medical staff and nurses.”

Denny Meyer, spokesperson for TAVA as well as a longtime activist for gay service members, said even as the military prepares to open its doors to openly gay men and women, transgender individuals remain locked out in the cold. Those that do manage to join up, he said, risk “both emotional isolation and physical danger.”

“While gay service members have been able to be increasingly open among their peers in the past 10 to 15 years, transgender troops have remained largely closeted and isolated, with no ‘renaissance’ of understanding at all,” Meyer said. “There are endless stories of transgender vets being discriminated against. I get calls every week.” 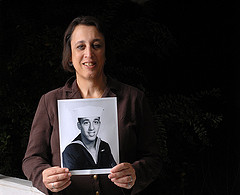 Monica Helms, president of the Transgender American Veterans Association (TAVA) and a veteran, has been living as ‘Monica’ since 1997.

Helms, like Bradley, is a veteran, was married, had children and is a transexual, But unlike Bradley, she has not yet elected for gender reassignment surgery.

Helms, who has been living as ‘Monica’ since 1997, said transgender veterans —who were generally overlooked during the Don’t Ask, Don’t Tell debate — now need a voice more than ever.

“The media doesn’t seem to care,” Helms said, adding that until the major, heavily funded LGBT rights organizations like the Human Rights Campaign switch their focus, the issue will continue to take a back seat. “[Organizations like the HRC] pretty much run the show in Gay Inc. Most of the people who donate to them are rich white gay men. They get to call the shots.”

Yet there are signs that some people are beginning to rally around TAVA’s pink and blue standard. Columbia University hosted a debate this February on whether to allow Reserve Officer Training Corps (ROTC) — banned for more than four decades — back on campus. Raucous protesters heckled veterans who spoke in favor of ROTC programming.

Protesting student Sean Udell specifically mentioned the treatment of transgendered people as a reason to continue the ban. “Transpeople are part of the Columbia community,” Udell said, as reported originally by the New York Post.

Still, Helms remains unconvinced. “Until I start seeing progress, I can’t really say [when change will come],” she said. “I can’t give false hope to people.”

During her decades of service, Bradley herself sometimes found hope hard to find. She battled depression and substance abuse as well as the persistent questions about her own sexuality. Now, Bradley harbors no ill will towards the U.S. Navy and her partner is herself a transgendered, 15-year veteran of the U.S. Air Force.

Bradley managed to have her military record officially changed to recognize her gender transition, something few others have been able to accomplish.

“All my paperwork has been changed,” Bradley said. “I went through a board of review and took me three and half years. The government and the military recognized that I had exhausted all ways and means of what my sexuality was. I’m one of the rare few.”

Immediately following her gender assignment surgery, her local VA center in Miami, Fla. refused to treat Bradley at the female clinic, yet Bradley maintains her positive outlook on her years of service.

“I don’t blame the military,” she said. “I’m very proud of what I did. More so now than I was before.”

[…] Reporting the Nation in Multimedia student, won a 2011 NLGJA Excellence in Journalism Award for her piece on the effects of the repeal of Don’t Ask Don’t Tell on the transgendered. Bennett-Smith is a graduate […]