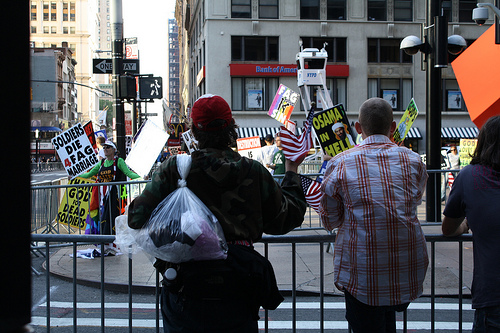 Vistors watch Westboro Baptist Chuch protest the 9/11 memorial service. The church believes the attack was an act of God. Photo by Nicole Guzzardi

The often controversial Westboro Baptist Church, known for their protests, which can include American flag burnings and picketing funerals, were in full force at today’s 9/11 memorial service.

Stationed on Broadway and Liberty Streets, they held signs that read, “God’s Wrath = 9/11, and America is Doomed,” and shouted “God hates America,” startling visitors who came to ground zero to remember the thousands killed on Sept. 11, 2001.

Church members shouted their belief that soldiers and 9/11 victims died by God’s hands, because he does not approve of homosexuality. They wore t-shirts donning the slogan, “God Hates Fags.”

“You think 9/11 was bad, you ain’t seen nothing yet,” said protester Abigail Phelps. “There is still time. You are still alive and you can still repent.”

Phelps said the 9/11 attacks were just a fraction of God’s punishment on the world for their sins, which include adultery, fornication, abortion and sodomy.

“We are supposed to thank God for all things that happen, that is to indicate that you understand and are obedient to a sovereign God,” Phelps said in regards to the 9/11 attacks.

Many visitors seemed disturbed by the protest.

Michael Fleming, 32, of the Bronx, who served two tours in Iraq from 2003 to 2005 and served six months in Afghanistan, shouted at protestors. He was hurt by a sign that read, “Soldiers Die, God Laughs.”

“I want to jump over the fence and rip their throats out,” he said. “This is a day of somberness and remembrance.”

Hannah Moch, 18, of Battery Park, said the protest was especially disturbing to her -not only did she grow up in the city, but also she was in elementary school at PS 234, which stands about three blocks from where the Twin Towers fell.

“On that day, my mom saw the first tower hit and immediately came and got me [from school], and she took me outside and she knelt down by me and said, ‘you have to look at this, [pointing to the towers] because this is history,” Moch said.

Today, she argued back and forth across barriers with protestors about gay rights.

“The whole point is they should be ashamed of what they are doing here today,” she said.

Police surrounded the protestors to make sure there were no incidents.

“If you read the bible, then you know God said there is no such thing as an innocent person,” Phelps said of the 9/11 victims.

[…] of homosexuality is the cause of God’s judgment and catastrophic punishment in the form of 9/11, Hurricane Sandy, and seemingly any other news story about destruction in […]

What The Westboro Church Shows Us About Ourselves | Jack Saunsea: Contemplative Consultant says:
March 17, 2014 at 2:48 pm

[…] of homosexuality is the cause of God’s judgment and catastrophic punishment in the form of 9/11, Hurricane Sandy, and seemingly any other news story about destruction in […]

[…] times now, the Westboro Baptist Church has protested the deaths of 9/11 victims, insisting that they died because, as per usual, God hates gay […]