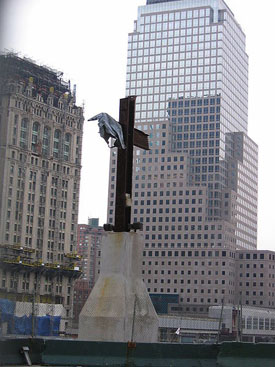 The 9/11 Cross on a pedestal at ground zero. Photo courtesy of Wikipedia

The 17-foot steel T-shaped beam pulled from the wreckage at ground zero after the 9/11 attacks has become a religious symbol for many. Families prayed at the foot of the cross; small pocket sized replicas were made.

Now that the cross has found a permanent home at the National September 11 Memorial & Museum, atheists say the cross has no place in a museum funded by taxpayers’ money, many who are not Christian. They feel the cross is a violation of the first amendment, which prohibits the federal government from showing preference for one religion over another or over the non-religious.

Members of NYC Atheists a non- profit organization who advocates for separation of church and state, met yesterday to discuss the progress of a lawsuit filed in July by group members to have the “Miracle Cross” removed from the museum.

The plaintiffs, three members of NYC Atheists, argue that keeping the cross in the museum is a “violation of constitutional rights.”

Dennis Horvitz, one of the three plaintiffs, believes if their case is lost it will set a bad precedent for future issues of separation of church and state.
Horvitz, 62, from the Upper West Side, said the group is being criticized as standing against Christians, but that’s not the case.

Peter Pohly, 73, a resident of the Upper East Side, an atheist, came specifically to hear about the lawsuit, which he supports

“I find it truly appalling that a place of public interest is singling out one religious sect,” Pohly said.

He believes it’s imposing religion on the memorial and those it honors, when many of those who died were not Christian.

“It’s as if the people with other or no religious beliefs are not equally as important,” Pohly said.

During the meeting, attendees watched a recorded interview with Danielle M. Mathey, the attorney for the plaintiffs. Afterward they had a Q&A session with Mathey via Skype.

Mathey, of Green River, Wyo., said she believes the plaintiffs have a strong case and it should be settled before it reaches trial.

But Attorney Paul L. LaClair, of the Gucciardo Law Firm in Lower Manhattan, who attended the meeting, disagrees.

“I think they have absolutely no shot at winning this case, but I wanted to hear what Danielle (Mathey) had to say,” he said.

LaClair, 57, said the case lacks precedent because the museum isn’t open yet for the final display to be evaluated.

Because the display won’t be completed till next year, there is no way of knowing what other items are going to be put in place, or if those items might make it more secular. The plans include a Jewish Star of David made from steel remain, as well as plans to include in the display a Bible and a prayer shawl recovered from ground zero along with the cross.

“Everything is going to depend on how the museum puts the display up,” LaClair said.