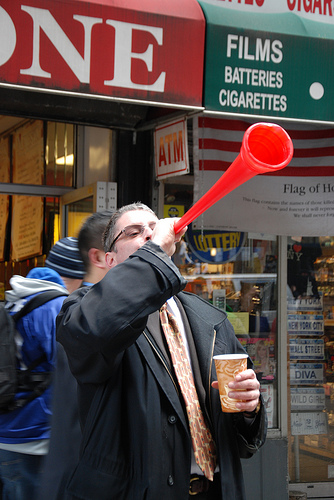 Thousands of Giants’ fans traveled from all over the New York metro region to attend today’s Super Bowl victory parade in Lower Manhattan, but one boisterous group of supporters on Cortlandt Street only had to walk a few blocks to catch the action.

“We do whatever we want, we’re stock brokers!” said Dave Cutolo, 44, oozing with bravado.

Cutolo, of Murray Hill, was standing with a group of work associates who all worked “down the street,” he said, without identifying the company they worked for. Wearing a black coat over his brown suit and patterned yellow tie, he held a plastic red horn that he bought from a street vendor in one hand, a coffee cup half-filled with beer in the other.

Cutolo and pals all wore suits and overcoats, standing out in a sea of people clad in Giants’ blue. But their attire didn’t prevent them from mixing in with the crowd: they hooted, hollered, laughed and screamed at passerby, passing the horn around and joining in the various “Let’s Go Giants!” chants that arose out of the massive crowd bordering Broadway. 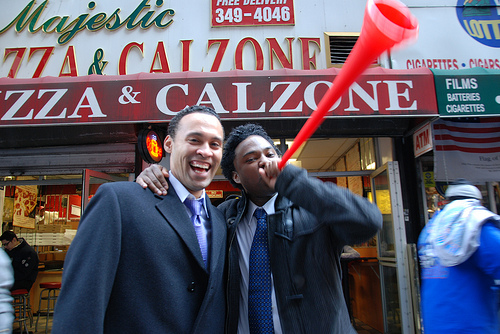 Elvin Lopez, left, and Ron McClintock are stock brokers who were enjoying themselves at the Giants' Super Bowl parade. Photo by Chris Palmer

Ron McClintock, 32, a member of this stock-broking entourage, brushed off the idea that they were sacrificing time at work for a day of partying, saying that they could easily enjoy themselves while being productive.

And the celebration would last all night, he said.

“See all these women?” he said, motioning to the enormous crowd. “I’m going to be like a fish net, scooping up everything.”

McClintock and Elvin Lopez, 31, were eager to express their love of this season’s Giants’ team, and Lopez said the way the team fought through the playoffs was representative of the city’s attitude.

“It’s the greatest thing,” McClintock said. “No one stops (the Patriots) but New York.”

But Cutolo, despite being a Giants fan, wasn’t totally thrilled with the game’s outcome.

“I had money on the game,” he said, explaining that he needed the final score to end with the numbers five and three in order to take home the cash.

He wasn’t letting his lost wager depress him too much, though: while he and his friends attempted to whip the surrounding crowd into a frenzy, he cast an optimistic lens on the rest of his afternoon.