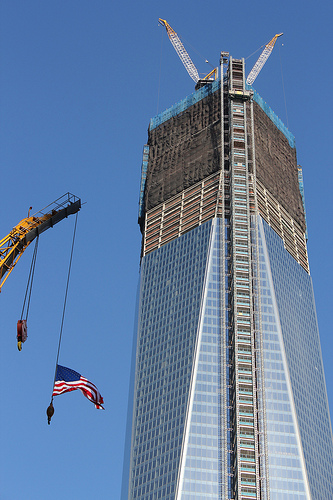 A flag is suspended from a crane next to 1 World Trade Center, the building formerly known as the Freedom Tower. by Alyana Alfaro

On the 11th anniversary of 9/11, visitors to the former site of the Twin Towers expressed grief, sympathy and some displeasure with the decisions for both the site itself and yesterday morning’s remembrance ceremony.

On Sept. 11, 2001 the largest-scale terrorist attack on U.S. soil claimed almost 3,000 lives. Now, for the first time, Ground Zero is taking shape with the new One World Trade Center, also known as the Freedom Tower, nearing its final height of 1,776 feet.

While the building is still a shell with exposed beams comprising the top floors, it is now the dominant structure of the downtown landscape. Soon it will be the tallest structure in New York, but, for many this construction is not a happy sight.

“That ain’t no Freedom Tower, that is One World Trade,” Gary Nielson of the Bronx said. He lost a friend in the attacks. “We New Yorkers, we don’t like that name. They should have built the original trade center buildings back up.”

Nielson said it does not properly remember the lives lost.

“It represents building back up what was taken down, but you have to remember you have 3,000 lives so you can’t really replace that,” he said.

Joe Loliscio, a volunteer firefighter from Baldwin N.Y. who was an early responder at Ground Zero said he believes that the new tower fails to properly represent the victims.

“Personally, I think that they should have put the two towers back up,” said Loliscio. “But it is better than nothing.”

Loliscio, who has been a firefighter in East Rockaway, N.Y. for 41 years, wasn’t pleased with the memorial service. This year the service was limited to mostly families and while Loliscio believes the decision to keep politics out of it was a good one, he also believes that the workers who risked their lives were not properly recognized.

“We have been x’d out of Ground Zero,” he said. “For the past years until now I have always been able to get through security, but you’re just not allowed in if you’re not family. I understand family should be in but, so should the rescuers, the first responders. We should have access and we don’t and it’s wrong.” 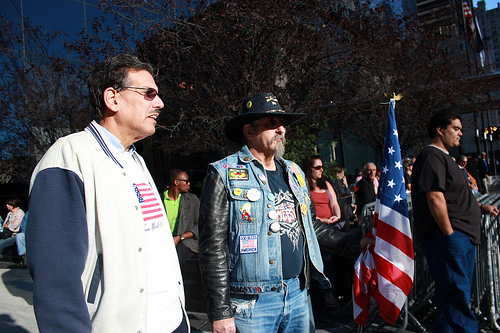 Gary Nielson (right) and Gary Arturi stand outside of the closed 9/11 memorial. by Alyana Alfaro

Now, after 11 years, it is these first responders and cleanup workers that are feeling the direct impact of the attacks. The dust created when the buildings collapsed contained many carcinogenic materials like lead, mercury and asbestos and have left many recovery workers with cancer and chronic respiratory illness. To date, hundreds have died due to illness directly related to the cleanup and recovery efforts.

But not everyone thinks the family-only policy at the memorial this year and the tower were bad decisions.

Kathryn Fromisano, a Project Associate for Trinity Wall Street, which runs St Paul’s Chapel, the church directly across Ground Zero, cited the services the church offers as a good alternative for those who were not allowed on site this year. According to Formisano, the church expects five to seven thousand visitors looking for some “guidance” on the anniversary of the incident.

“As a church, we really don’t have an opinion about the tower, but everyone here is just happy to see the area being built back up,” she said. “Personally, I think its fine. From my office, I’m down on 74 Trinity Place, and from up on the 24th floor I can look at it and it is just beautiful.”

According to Formisano, the construction of 1 World Trade is less about the tower itself and more about what it will do to the area.

According to the Lower Manhattan Construction Command Center website, the building is scheduled to open late next year after delays nearly doubled the initial estimated construction time.