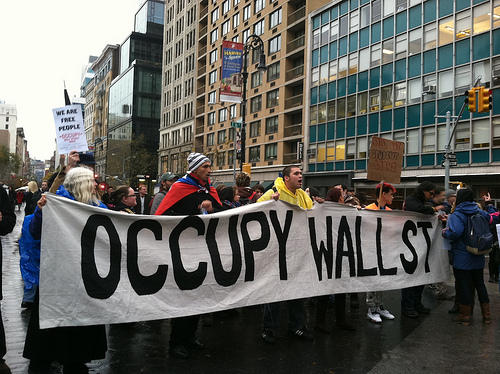 Protestors held a rally with students from all over the city in Union Square today and marched along Fifth Avenue. Photo by Nicole Guzzardi

Groups of NYPD officers stood armed at every corner inside the Union Square subway station this evening watching Occupy Wall Street protestors as they chanted and expressed opinions to anyone willing to listen. while outside in the square, students from all over the city joined protestors to rally against the 1 percent.

With the constant threat of being permanently banned from their headquarters, Zuccotti Park, protestors have decided to take action citywide, occupying subway stations in all five boroughs in hopes to educate those not already involved in the movement. They called it “A National Day oF Action” and in the end scores of protestors were arrested and several police officers injured.

Protestors gathered inside the Union Square station to try to engage commuters in conversation by sharing personal stories, hoping to highlight problems faced by the 99 percent.

“It’s to talk to people about what’s going on,” said Joe Chavez, 28, a protestor from East Williamsburg, Brooklyn. “It’s not to shut the subways down, its not about taking them over. It’s about sharing our stories.” 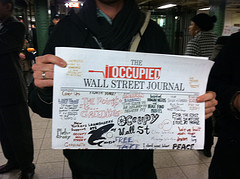 The Occupied Wall Street Journal is the Occupy Wall Street Movement's personal newspaper, disseminating news about protests and the change they wish to see. Photo by Nicole Guzzardi

In the station, protestors handed out free copies of “The Occupied Wall Street Journal,” the movement’s personal newspaper.

Michael Levitin, 35, from San Francisco, Calif. is one of the five editors of the paper. He was handing out free papers for commuters to read on the subway, further spreading the occupiers’ message. Levitan said the paper is funded by the more than 1,600 donors from around the world. The paper’s fifth issue, which will be a national one, will be launched next week.

Meanwhile, above ground, protestors and students from schools all over the city gathered at Union Square to hold a student rally and march along Fifth Avenue. 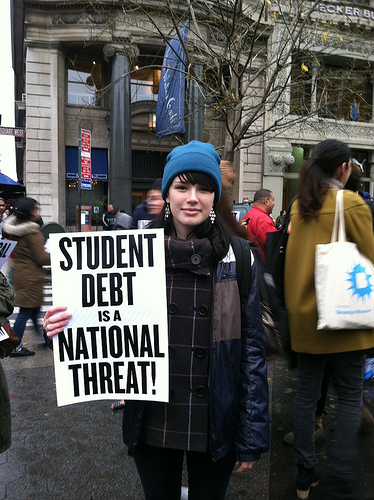 Ally Freeman, a student from the New School, attended the OWS student rally today in Union Square. She took out student loans for her education and worries about student debt affecting people her age. Photo by Nicole Guzzardi

Ally Freeman, 18, from Greenpoint, Brooklyn, a literary studies major at The New School, said students are especially affected. She takes out student loans to pay high tuition prices, and said it’s time for young people to speak up.

“It’s really important that we be here, to show just because they’ve moved us out of Zuccotti Park doesn’t mean there isn’t still this movement,” Freeman said. “We’re still here and we’re still fighting.”

As for the threat of losing their home base of Zuccotti Park, some protestors said they aren’t worried.

Tielor McBride, 25, a protestor from Kansas City, said you can take an idea out of anywhere and the lack of space won’t slow down the movement.

“It was never about the park, it exists in the minds and the hearts of the people that believe in it,” he said.