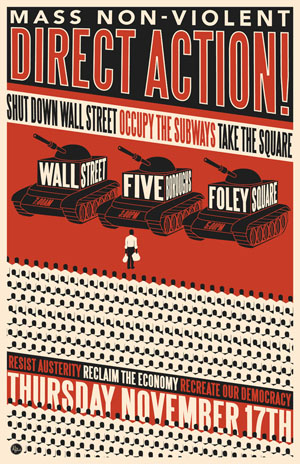 With a crackdown of Occupy Wall Street protestors in other cities across the country, the group in the epicenter of it all in Zuccotti Park is scheduling a massive day of “direct action” on Thursday with aims to have protestors occupying every block of New York City.

Dubbed the National Day of Action or N17 it includes a march from City Hall to the Brooklyn Bridge, the site of 700 arrests on October 1.

Bold flyers are being spread through social media via Twitter, urging followers to “Occupy Every Block,” and use the hashtag, #N17. A Facebook event is also in the works. Protests are expected to begin at 7 a.m. in front of the New York Stock Exchange where demonstrators will use “mass non-violent direct action” to “Shut Down Wall Street.”

The plan is for the protest to spread across the five boroughs simultaneously at 3 p.m. as protesters take over 16 central subway stations and ride into the city as one unit.

A presence of unity is one that the protestors have worked to develop. Bret Rothstein, 24, a member of the OWS press working group, explains that embracing togetherness has already occurred at Zuccotti Park.

“The goal is getting everybody together, all the occupations,” Rothstein said. “We are all obviously on the same page, we are all here for the same common goal.” 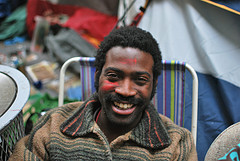 Michael Frock, wears red paint from a morning meditation session in Zuccotti Park. Frock believes Thursday's Day of Action will be huge for the movement. Photo by Joann Pan

Michael Frock, 24, from the Upper East Side, has been occupying Zuccotti Park for approximately a month and believes the Day of Action will be big for the movement.

“I would love to see all the 99 percent go home, not go to work, not go to school and occupy with their families,” he said.

The movement is about letting the government know that citizens are upset and giving those living in frustration an arena to speak, according to Frock.

“If enough people do that on one day it will make the message loud and clear,” he said. “The message is that, ‘You can’t live without us.’ [The 1 percent] treats us like we are invisible, so now we are going to act as if we were, and see how they do on that day.” 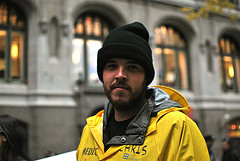 Chris Carter, 28, believes the Day of Action, will bring the various groups in different cities. Photo by Joann Pan

Chris Carter, 28, from Bethlehem, Pa., said the Day of Action will be a step towards making the various occupations and their corresponding communities cohesive parts of the global movement.

“It shows that it’s not just city to city, but that we are all connected,” Carter said. “Hopefully it will show the solidarity we have, not just with the people in occupations, but all together. We are all a part of the 99 percent.”

Molly Smith, 35, of Prospect Heights, Brooklyn, who was crocheting hats for those in Zuccotti Park on Sunday, is unsure of whether she will partake in the Day of Action. Still, she said she fully supports the idea.

“I like that idea. I really wonder if I would be gutsy enough to walk out of my school,” said Smith, a teacher in the West Village. “But I talk about it at lunch all the time and I can’t believe how little people know of it in terms of how it would affect them.”

[…] all five boroughs, in hopes to educate those not already involved in the movement. They called it “A National Day oF Action” and in the end scores of protestors were arrested and several police officers […]