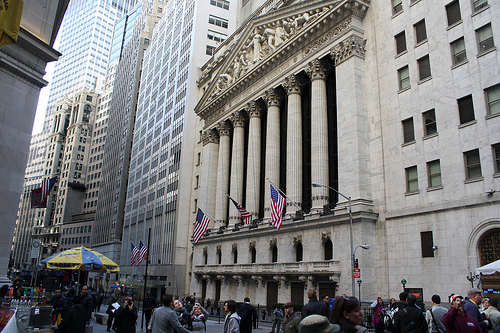 Tourists crowd Wall Street April 22 to see the New York Stock Exchange in Manhattan's Financial District. A group of residents are trying to change the name of the neighborhood to SoMa, short for Southern Manhattan. Photo by Kathryn Kattalia.

To ascend the steps of the Wall Street subway station is to enter one of the most famous city sectors in the world. Skyscrapers cast shadows over narrow streets where people in business suits weave in between tourists clamoring to snap photos of the New York Stock Exchange—the epicenter of Manhattan’s Financial District.

But these days, it seems like the Financial District is undergoing a bit of an identity crisis. Mothers with baby strollers are among those to be seen walking the streets along with Wall Street investment bankers. Luxury apartment buildings are replacing office high rises. Some residents even say there’s nothing really financial about the Financial District at all anymore, besides its name.

So why not call it something else?

An informal committee of seven residents is pushing to rename the Financial District SoMa, short for Southern Manhattan. The group is asking that the neighborhood’s businesses and organizations use the name to help it catch on throughout the community.

Led by Sundeep Bhan, 38, who moved to the area with his family five years ago from TriBeCa, the committee claims that the name SoMa more accurately reflects the changing dynamics of a growing neighborhood. The Financial District has seen an explosion of residential development in the past 10 years, its population nearly tripling since 2001 according to city estimates. Big businesses are moving out and families are moving in, bringing with them restaurants, shopping and other amenities not necessarily associated with the Financial District. SoMa, they said, is more inclusive.

“A lot of the banks have moved out of this area, which created room for all different kinds of businesses,” Bhan said. “There is a lot of excitement. There is this energy about all these things that are happening. We felt like it needed an identity—an umbrella for all these great initiatives that are happening down here.”

Bhan said he got the idea last fall after returning from a business trip to the Southern Market district of San Francisco—an area also referred to as SoMa.

“It seemed like a nice name,” he said. “It rolls off the tongue.

But while SoMa certainly has a ring to it, whether or not it will stick seems to depend on how residents want to see the neighborhood grow in the future.

A downtown man who only refers to himself as Voltaire reacts to news that a group of residents are pushing to rename the Financial District SoMa for Southern Manhattan.

cityrealty.com, one-bedroom condos in the neighborhood start around $400,000. To rent a studio costs about $2,000 a month.

Raj George, a member of the SoMa committee who is leading the group’s marketing efforts, said despite high prices, it is becoming an increasingly popular place to live. To call it the Financial District is to imply a nine-to-five business section of town, he said.

“We definitely wanted to get feed back and buy in from the area businesses, in particular the bigger, more visible entities that are in the footprint of the current Financial District to see if there was an interest to change the name to something that was better reflecting of the neighborhood,” George said.

He said the reaction from businesses has been mixed.

“There certainly are reservations,” George said. “Feedback has been generally positive. Some are enthusiastic and others think it sounds interesting but they want to see who else is on board to see if there really is a movement.”

The true test, he said, will be to get residents to start using the name when referring to their neighborhood. The group has started a Facebook page, which has accumulated 79 followers, and plans to distribute 30,000 postcards bearing the “I Love SoMa” logo.

But whether or not SoMa will catch on remains to be seen. There is no official process to adopt a new neighborhood name other than wide spread usage.

Annie Fine, 52, has worked in the Financial District for years at the New York City Health Department. She called the push “silly.”

“I guess they’re trying to make it sound fashionable,” Fine said. “I think it would be cool to say you live in the Financial District. It doesn’t mean you work on Wall Street. I would say calling it SoMa doesn’t really add a lot of value.”

Still, ensuring that SoMa becomes part of New York City lingo is not entirely the point of the campaign to rename the area, Bhan said. The goal is to get the city to recognize the changes that are taking place in a vibrant part of Manhattan.

“There is already a lot of great stuff happening down here,” Bhan said. “SoMa or not, it’s not going to stop. This name could give it an extra boost. The neighborhood needs a strong brand. It will get attention.”