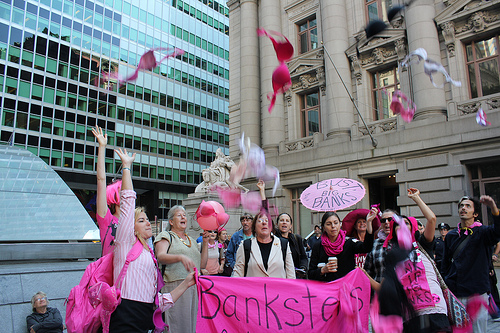 CODEPINK members perform their signature action of throwing pink bras into the air at Bowling Green. by Alyana Alfaro

This morning the people’s mic—the Occupy movement’s way of broadcasting messages to crowds without equipment—could be heard echoing through the Vietnam Veterans Plaza as small groups of Occupy Wall Street protesters, called affinity groups, came together at the hub of the movement’s “Debt Zone.”

A mere three blocks away from the New York Stock exchange, protesters like Amanda Lodoza, dressed from head-to-toe in pink complete with a fluorescent-colored bra affixed to her backpack, were able to meet with like-minded occupiers as they prepared for today’s planned march on Wall Street.

For Lodoza, who came from Houston, Texas to participate in the movement’s one-year anniversary, it was an opportunity to meet activists from all over the country.

“I’m here at Occupy because I believe this is the most inclusive pro-human rights group around,” she said. “It is a community building movement that I have not seen anywhere else.” 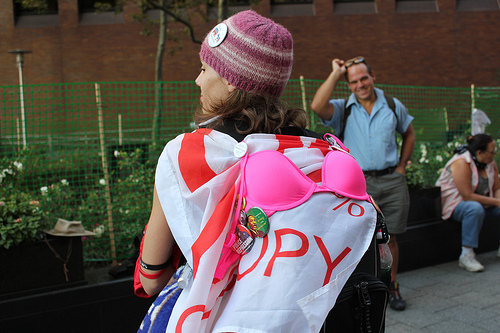 Amanda Lodoza of Houston, Texas traveled to New York to march with an women's group. by Alyana Alfaro

Lodoza came to Wall Street to march with CODEPINK, a women-only activist group that engages in protest against issues like the Iraq War and the use of drones in military strategy.

Jodie Evans came from Venice Beach, Calif. to participate in the today’s march and is one of the co-founders of CODEPINK. She said that the organization, whose slogan is “women for peace,” directly took its name from military terminology.

“We were started at the beginning of the push for the Iraq war because Bush was frightening people with ‘Code Red’ and ‘Code Yellow’ so we called ‘Code Pink’ for peace,” she said.

In general, Occupy Wall Street is not directly related to military conflict the movement still works with the organization’s mission Evans said.

“What is happening today is very much a part of our work,” she said. “It is a war on the people of America from the workers of Wall Street. It is not fair to the people of the country the way Wall Street it behaving. The full on rape and rabid greed that is undermining the very fabric of our society is unfair and that’s the point.”

Some activists like Lodoza feel they have been directly impacted by this “war.”

On Sunday Lodoza was arrested and charged with disorderly conduct when CODEPINK performed an action in front of a Bank in America to protest the bank’s financial support of fracking or the extraction of natural resources from within the earth’s rock.

Lodoza was arrested while performing CODEPINK’s signature action of throwing pink bras into the air.

“We were to pause for a moment in front of Bank of America and disperse bras—we called it bust up Bank of America,” she said. “Foolishly, I turned my back to the police, raised my pink bra above my head and I got grabbed by the elbow and dragged off the street.”

Lodoza said that she was only arrested because she was “easily accessible.”

“Arresting officers were extremely sympathetic,” she said. “They verbally expressed to us how upset they were with the ‘white shirts’ who just yank people out of the crowd and hand them over to a blue shirt so they have to spend hours doing paperwork.”

Both Evans and Lodoza agreed, that Occupy Wall Street brought women’s issues back into the pubic eye and gave feminists a way to reorganize.

“I like the idea of being in an affinity group with other women,” Lodoza said “In mixed groups, women’s rights are often silenced even among feminist men. The emotional support you get from the women for me, as a woman, is just a little bit better.”

While Lodoza began her march this morning at the “strike debt” hub she said she had no particular connection to the debt issue.

“The CODEPINK organizers chose it,” she said. “I trust their judgment.”