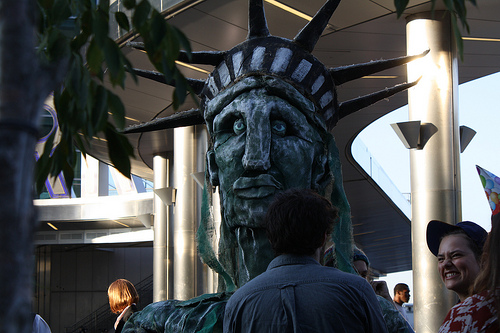 Occupy Wall Street protestors struggled to find a cohesive message during their one-year anniversary demonstration today, but they did succeed in having a celebratory demonstration that blocked traffic and led to over 150 people arrested for their cause.

The demonstrators had hoped to carry out the legacy that began in Zuccotti Park one year ago by voicing their dissatisfaction with Wall Street on the topics of ecology, education and debt at a series of protests and events beginning at 7 a.m.

Instead, the southernmost tip of Manhattan was transformed into a birthday party of sorts as the People’s Puppets, a theatrical group of Occupy Wall Street demonstrators, assembled, donned their party hats, rehearsed a few catchy OWS-themed tunes and marched north into the heart of the financial district.

One puppeteer wearing a giant monopoly man head carried a chain looped around the necks of fellow protestors wearing oversized Barack Obama and Mitt Romney cardboard cutouts over their faces.

“This is a beautiful day in the revolution,” the Puppets announced from their Twitter account, @Power2thePuppet. There was no mention of the issues on their minds.

Danielle Capron, 23, of Harrisburg, Pa. was one of the protestors marching with the People’s Puppets.

Capron originally became involved with the Occupy movement in Washington, D.C. to express her frustration with the military because her twin sister, a war veteran, suffers from severe posttraumatic stress disorder.

“It’s wrong that they lie to people about what they’re gonna be doing and it’s just horrible,” Capron said.

Some other issues on Capron’s agenda are health safety and food safety. Today was her first day marching with the People’s Puppets.

“I just came up to hang out with them,” Capron said.

Desire to hang out with the People’s Puppets and their large scale Statue of Liberty marionette was a common theme throughout the morning.

One homeless man awoke from his sleep on a Broadway sidewalk to the noise of the Puppet’s kazoos. He immediately stood, was handed a sign by a passerby, and became part of the movement.

Barry Knight, sporting an American flag t-shirt, travelled from Massachusetts to ensure that the issues on his mind were addressed as part of today’s anniversary.

“The problems are vast and that’s why a lot of people in the beginning said we didn’t have a clear message,” he said.

He wants corporations to be held responsible for their actions. He also wants to stop mountaintop removal and deep sea drilling.

“It’s not that we don’t have a clear message it’s that there were so many problems, but they are all interconnected and it starts with Wall Street, the oligarchy that is taking over our country.”