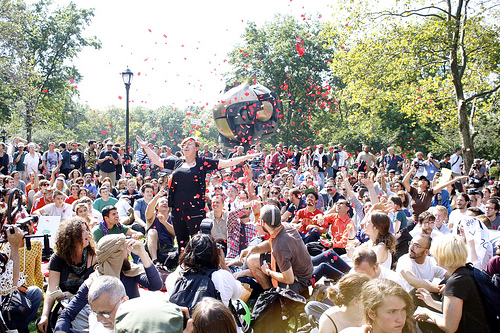 Protestors held a “spokescouncil” in Battery Park to discuss their part in the Occupy protest. Photo by Daniella Silva

One year after the Occupy Wall Street movement first converged in Zuccotti Park, hundreds of protestors flooded the financial district yesterday in an attempt to surround the New York Stock Exchange. Hundreds of police officers also lined the district: some on foot, some on horseback, and others on motorcycles. By late afternoon, over 150 people were reported arrested, according to the National Lawyers Guild of New York City.

Protestors waved banners, played music, and danced in the street. Others wore party hats and yelled, “Happy Birthday!” Demonstrators blocked several intersections before being scattered by law enforcement. Many spoke out against an unjust economic system and rallied against the same grievances the movement called attention to last fall. 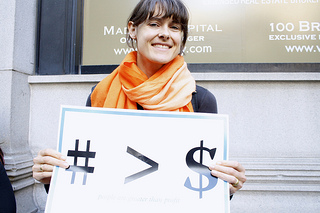 “People can’t move on,” said Chloe Cockburn, 33 a civil rights lawyer from Williamsburg, Brooklyn. “So many people have someone in their family facing a debt crisis, or a foreclosure, or an immigration crisis.”

During the protests, Zenkus broke off into a chant, “Warning! If you’re not paying your fair share of taxes, the police will be making arrests today! Please stay safe.”

The protest was divided into affinity groups, small groups of people within the movement who share a common tactic, identity, skill or politics, according to the Occupy Wall Street web site. Each group united at specific locations throughout the financial district at 7 a.m. before making their way through towards the Stock Exchange. A map on the site shows the district divided into four blocs: the 99% Zone, the Education Zone, the Eco Zone, and the Debt Zone. Organizers for the movement had been planning the event for months, said Zenkus.

Despite the turnout, Zenkus said he lamented people’s limited ability to show their support.

“For every one of my friends that’s here, I know a lot of people—good people—who sympathize but couldn’t come out today,” he said.

“It’s a good turnout this year,” said T.J. Frawls, 33, founder of the Political and Electoral Working Group at OWS. “I was here on this day last year and it’s just as many people—maybe more.”

“I carried this same sign,” he added. The sign, now a crumpled piece of cardboard read, “SMASH THE TWO-PARTY SYSTEM.”
Frustration with the current electoral system resounded throughout the protest. Within a movement largely touted as being liberal, most expressed a largely nonpartisan political resentment.

“The two-party system constrains voter choice and creates the fiction that these two corporate-sponsored parties actually represent the existing spectrum of political interests and beliefs in this country,” said Frawls. “And they don’t. They only represent a narrow set of interests.”

“To me the election is a distraction,” said Zenkus. “We’re still here. People are still enraged.”

Some protestors wore masks bearing the faces of President Obama and presidential candidate Mitt Romney. In one group, the two were chained at the neck by another protestor dressed as Rich Uncle Pennybags, the mascot of the game monopoly.

“Frankly I don’t think it’s a left-right issue,” said protestor Douglas Ficek, 35, of Astoria, Queens. “The idea is that more and more we are moving away from a democracy to a plutocracy—rule by the rich.”

Ficek added that he would still vote for President Obama in November.

“It’s ok to vote for the lessor of two evils, I think,” he said.

The Occupiers reconvened for a meeting at Battery Park at 11:30 a.m. The early morning tension momentarily subsided as protestors sat in a large circle in the grass while police stood quietly by. At the gathering, called a spokescouncil, representatives from each of the affinity groups gave an account of the day’s successes, failures, and concerns. Some planned to stage further protests throughout the afternoon. 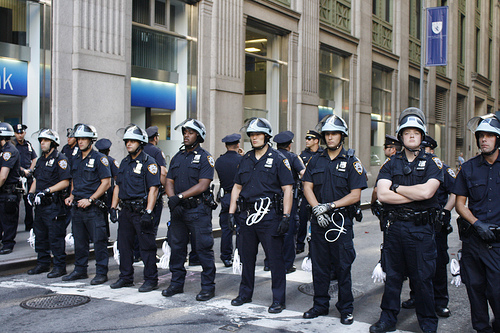 “There’s so many stories in the media saying ‘Occupy is dead this, Occupy is dead that’ and don’t get me wrong I get that because it definitely disappeared from public view, but there are a lot of local Occupy events happening,” said Ficek during the spokescouncil. He admitted that it was discouraging when large movements don’t come to political fruition. Years earlier, Ficek took part in the massive protests against the Iraq war.

Cockburn was torn between the ideals of the movement and some of its tactics.

“If success is stopping people from going to work—I don’t think that’s a good goal personally,“ she said, shrugging. “It is successful to the extent that there are many people out sharing a common message.” She added that police presence had a huge impact on the number of protestors.

Tommy Montalvo, a Puerto Rican cab driver from the Bronx, said much larger demonstrations were needed.

“We’ve seen other places, like Egypt, where it has happened,” he said. “Most of us can’t even visualize that happening here—not an overthrow of our government—but a complete economic change that favors the poor and middle class.
“We’re trending towards less activism, and even lower numbers. What is this going to accomplish?”

It’s important to recognize how Occupy changed the conversation to money in politics, to banking policies and financial firms that gamble with pensions and the economy at large. Even if the numbers on the streets are not the same. . . A lot of people have remained organized with other groups working on specific problems, and Occupy gave a lot of working groups and grassroots organizations a hell of a lot of traction. You hear stories of workers buying out their own means of production, fighting to change the constitution on Citizens United, things like that, and meeting a lot of support and a lot of success.

The truth is, the feet on the streets, tents on the ground encampment strategy of Occupy was not successful as a long term goal. If your expectation is that Occupy will maintain a constant encampment where people can go to voice their concerns (and also to be fed, be sheltered, receive medical and psychological care, etc) then you will see Occupy as a failure. But if you see it is a broader social project whose aims range from revolutionary changes in the economy to more rights for minorities and oppressed peoples to bridging the wealth gap… then you can start to see Occupy as a revolutionary force which will continue in people’s minds and which will be a hell of a lot harder to evict