Hundreds of Occupy Wall Street protestors marched to the New York Stock Exchange early this morning only to find the building already occupied, this time by hundreds of police officers that barricaded the entire perimeter.

What was intended to be an act of civil disobedience turned into a cat-and-mouse chase with police, who prevented protestors from being able to occupy anything.

Divided into four zones within the Financial District–Education, Debt, Eco, and 99 percent–the goal of the protests was to form a “People’s Wall” surrounding the Stock Exchange before assembling at specific banks and financial institutions on Wall Street. But walls of police prevented the protestors from forming any kind of takeover.

Yet protestors like Robert Cammiso were not deterred. Cammiso, 49, of Prospect Park, Brooklyn, was one of approximately 25 protestors who convened at South Street Seaport early in the morning to protest tuition hikes and the increasing costs of a college education. 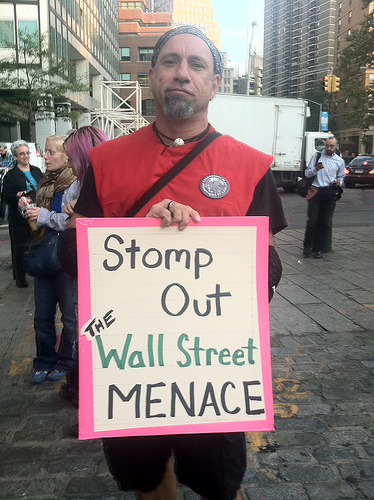 Robert Cammiso of Park Slope, Brooklyn, at the South Street Seaport Sept. 17 shortly before marching onto Wall Street. Cammiso, 49, went back to school after being laid off from his construction job in 2009. Photo by Timothy Weisberg.

“Unfortunately, it will get worse as the day goes on,” he said of the police presence.

Cammiso, who spent 17 days at Zuccoti Park, the root of the Occupy movement that began last September, was laid off from his construction management job in 2009, a position he held for nearly 30 years. Unable to find work, he went back to school and enrolled at Brooklyn College, where he became involved with OWS through the Brooklyn College Student Union.

Cammiso was also one of 700 protestors arrested last October during an attempted sit-in on the Brooklyn Bridge. But the strategies have changed since then, and protestors are no longer staging any sit-ins. 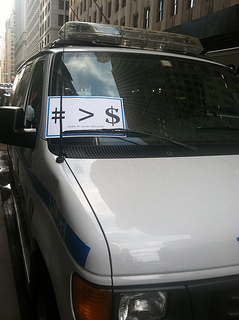 A sign placed on a police van by Occupy Wall Street protestors. Protestors attempted to form a people's wall around Wall Street, but were greeted by NYPD barricading the New York Stock Exchange. Photo by Timothy Weisberg.

“The tactics have changed from last year,” said Cammiso. “We no longer stand behind barricades, but we keep moving, and this prevents the police from massing in any one area and just creating a wall for us, which is what they are very good at.”
Still, more than 100 arrests were made by 11:30 a.m., according to the New York Times.

Monday marked the one-year anniversary of OWS that began in Lower Manhattan’s Zuccotti Park last September. The movement called for ends to social and economic inequality and raised concerns about debt, a stagnant economy, and the rising costs of education.

“There’s a consensus that debt is the threat that binds the 99 percent,” he said.

“Everything is interwoven, and in order to get people to understand them, you really have to pull them apart,” he said. “It’s not an equitable situation, and this march is about equity. There’s a class inequity and it’s been class war from the top down and we’re pushing back.”

Unfazed by the inability to take over specific targets, Cammiso and others regrouped and continued to march and protest in small groups. One group called themselves the “Balloon Brigade,” handing out balloons to protestors as an act of solidarity.
One year later and no longer holding Zuccotti Park as their own public forum, many protestors like Cammiso believe the causes and actions taken are worth fighting for.

“They thought we stopped, but one year later, we are still here,” he said.

Hi Tim- I appreciate the coverage and you sticking with us. Not sure where I lost you, but the convergence with the bigger groups spun a lot of us around. Peace – Rob