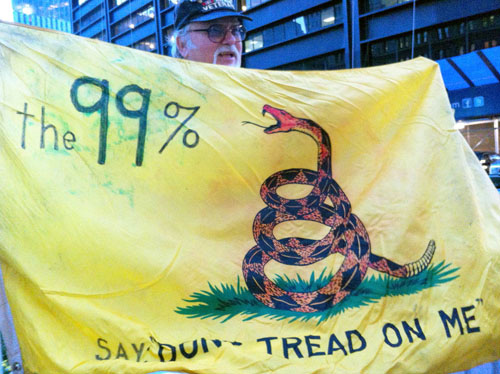 Bill Steyert, 69, of Queens, displays his "battle flag". Steyert is a Vietnam veteran who said he has been protesting since the late 60s. Photo taken by Breana Jones.

The occupation had begun.

But at just 6:30 AM, the birthplace of the Occupy Movement had more police than protesters and Steyert’s call was met with little response. Still, Steyert was excited.

“It feels like a birthday,” he said. “September 17 will always be a day in history. I’m here to show that the movement still has fire in it.”

Steyert, a Queens native and Vietnam veteran, said he was apart of every major movement of OWS, from the Brooklyn Bridge incident— which ended with 700 arrests— to May Day and finally, today, his “Occu-versary”. Steyert was wearing a “Veterans for Peace” shirt, a “Vietnam Vet” hat, and waving a dirty, yellow Gadsen flag that read “Don’t Tread On Me”. The senior citizen called it his battle flag.

“I added these words in permanent marker,” he explained, proudly holding out the flag. “So now it says ‘The 99% says Don’t Tread On Me’. This is a message for all Americans.”

But by 7:09 AM, Steyert’s battle flag lay abandoned in the middle of Broadway. The 69-year-old veteran had been arrested for blocking traffic. Steyert continued to chant “Occupy Wall Street!” as he was led away. His arrest was the first of more than 100 OWS arrests.

Six minutes later around 200 people had gathered near Zuccotti Park. The diverse crowd was abuzz with energy. The vibe was celebratory. Bands played as confetti was released in the air and protesters in elaborate costumes marched with props. But the older members of OWS were focused on the mission, not the frills.

Most brought up the rear end of the crowd. Others could be spotted in the rowdy mass here and there, walking in groups of two or three with their Army green “Veterans for Peace” shirts.

Last year, a profile of OWS said the average Occupier was 33. But the baby boomers of the movement, those 60+, are present and are making a statement.

“This is the worst I’ve seen the country in my entire life,” said Bob Nash, 69, of Long Island and a disabled Marine veteran. “Thirty percent of the homeless in the United States are veterans, that’s a disgrace.”

Steyert said he is a seasoned protester. After leaving the Navy, he began protesting the Vietnam War in 1968. He said OWS is reminiscent of the Anti-War movement.

“I never thought since the Vietnam War that I’d see that kind of enthusiasm and citizen action again,” said Steyert, “We’re all pissed and it’s a beautiful day to get arrested.”

And for Steyert, it was.