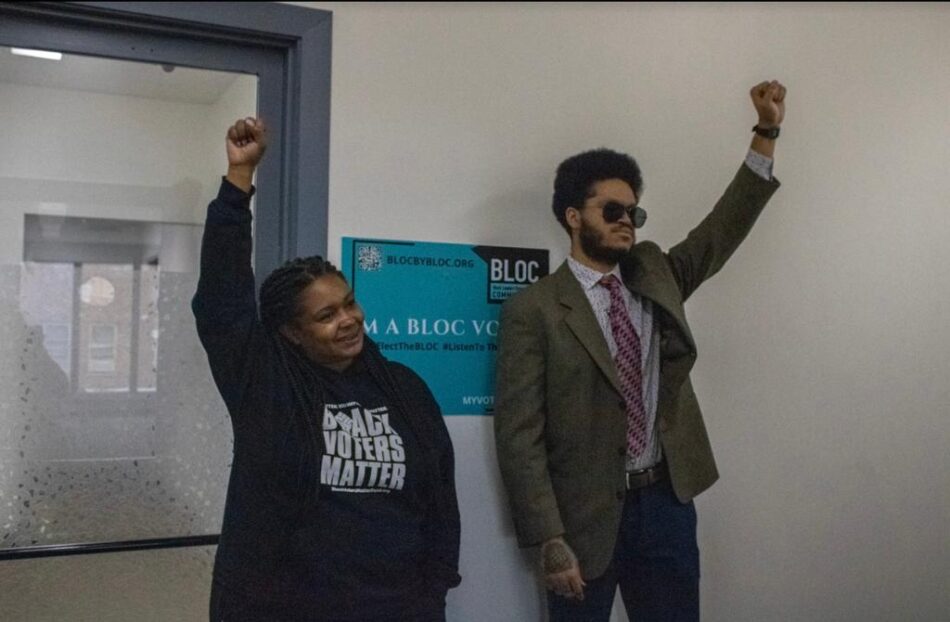 In Wisconsin, health care, Social Security, women’s reproductive rights and public education are on the ballot.

That’s why leaders of the organization Black Leaders Organizing Communities (BLOC) said they knocked on doors, had personal conversations, and showed up to support the candidates that align with their values.

BLOC was founded in 2016 by current executive director Angela Lang in Milwaukee, Wisconsin. She chose Milwaukee because it is one of the most incarcerated and segregated cities in America. 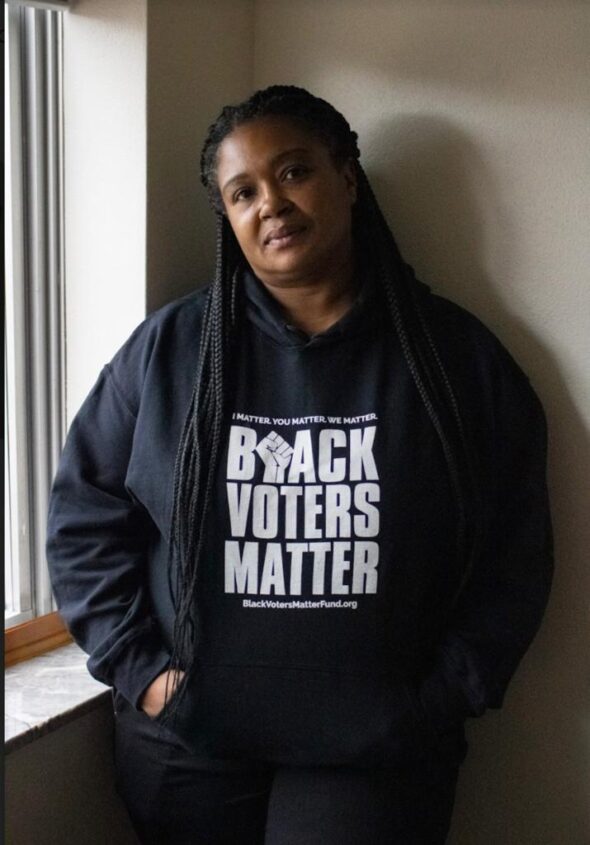 Nov. 5, 2022- Racine, Wisconsin. JoVonna Lue, the Community Organizer of the Racine branch of BLOC talks about the day-to-day routine her line of work entails during election season in her office in Racine. Photo by Lauren Peacock

“We’re building up what Milwaukee started, and we’re bringing it to Racine and Kenosha,” JoVonna Lue, Community Organizer of BLOC, said. “We’re having those day-to-day conversations and making sure we are present in the communities where we live.”

Lue said she got involved because she wanted to help people do and be better. She emphasized the importance of having simple, genuine conversations in her line of work.

“We want to build those relationships,” Lue said. “These are our communities so we really have to care in order to find solutions to work together.”

Kyle Johnson, Political Director of the Racine branch of BLOC, said that in the 2018 midterm elections BLOC contributed to the democratic sweep of the constitutional offices as well as Tammy Baldwin’s win. 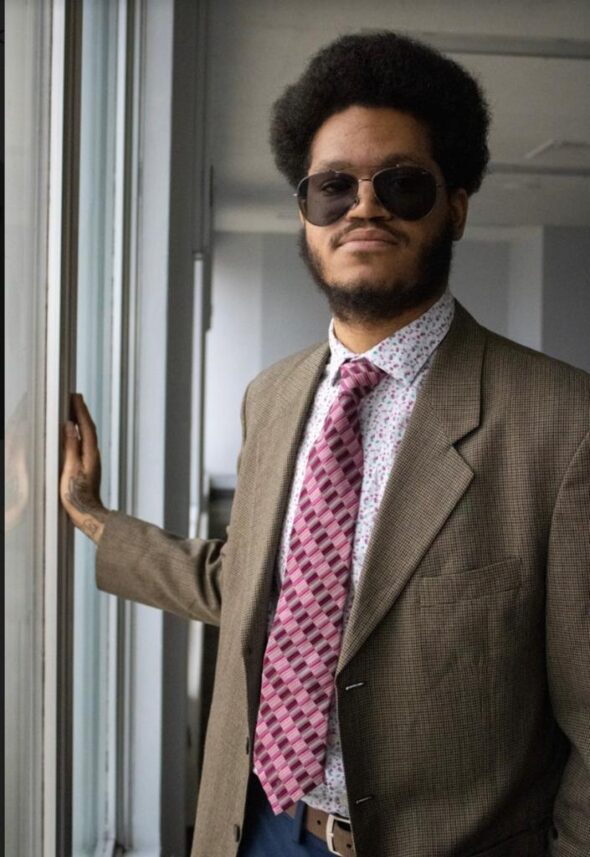 Nov. 5, 2022- Racine, Wisconsin. Kyle Johnson the Political Director of the Racine branch of BLOC discusses their hectic schedule days before the 2022 midterm elections in Wisconsin. Photo by Lauren Peacock.

BLOC is open about the candidates they support and endorse publicly. Johnson said they work to show communities how these candidates can help residents more than their opponents.

“You can see the hostility through the policy,” Johnson said.

“We sent over 620,000 text messages, and knocked over 55,000 doors,” Johnson said. “We reached out to people with a sense of education and an intent to inform.”

Johnson said they work this hard to ensure certain candidates don’t get voted into office —Candidates like Tim Michels, the republican who ran for governor of Wisconsin.

Michels said that republicans would never lose another election in Wisconsin after he was elected.

“He’s willing to sacrifice democracy for his party,” Johnson said.

Evers supports the work that BLOC does.

“I don’t care what side of the isle you’re on, getting people to vote is what democracy is all about,” Evers said, just days before the election.

Johnson says that some residents of color in Wisconsin that he met expressed feeling shut out of specific areas by white people.

“They’re trying to turn Wisconsin into a Sundown state,” Johnson said. “ Know your place, stay in Milwaukee, stay in Racine, stay in Kenosha. The rest of this is ours.”

Johnson believes that the Supreme Court banning ballot boxes in Wisconsin is one obstacle blocking people of color from having easy access to voting.

“We have so many barriers already to jump through,” Johnson said.

Bryan Tanayo, a 23-year-old resident of Kenosha, believes the work that organizations like BLOC do is essential because voting is not as accessible in communities of color.

“For example, limited access to voting places,” Tanayo said “Some voting places are put far away in communities where people rely on public transportation.”

Johnson said that BLOC’s support for the democratic party in the 2022 midterm election was based on harm reduction for communities of color.

If BLOC didn’t endorse democratic candidates like Tony Evers and Mandela Barnes, Johnson  feels that it would run the risk of having a representative who doesn’t support people of color.

“If Tim Michaels gets in, or Ron Johnson gets in, we’re the first person in line with targets on our backs and they’re coming for us,” he said.

The results of the 2022 midterm elections in Wisconsin showed that most of the candidates that BLOC endorsed ended up winning, including Tony Evers, Sara Rodriguez and Josh Kaul.

“We saw Democrats maintain control of at least the Senate, bucking decades of the trend of midterms yielding large losses to the party that held the Presidency,” Johnson said.

The republican candidate Ron Johnson won the senate seat over democratic candidate Mandella Barnes by exactly 1% of the vote.

BLOC openly supported Mandella and regardless of his defeat, Kyle Johnson said BLOC is proud of the work and role of Mandella Barnes.

“This was one of the closest Senate races we have seen in this state and it is a testament to Mandela that he lost by 1%,” Johnson said. “We need to continue the conversation around racism in this state and country if we want to truly understand many of the factors that played into this defeat.” 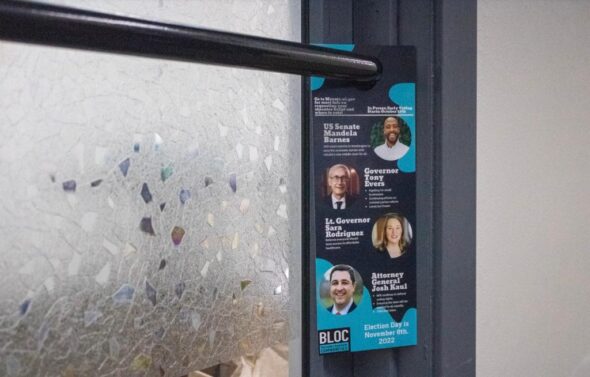 Nov. 5, 2022- Racine, Wisconsin. A flier hanging on the front door of BLOC’s office in Racine lists the candidates the organization supports. Photo by Lauren Peacock.

Johnson and Lue feel that the chaos of elections brings distraction to important issues, such as getting justice for Black Lives Matter cases like Breonna Taylor and Jacob Blake.

“We need to make sure people don’t forget what we were marching for in 2020,” Johnson said. “That fight’s not over.”

BLOC has an agenda with 10 points for issues that they believe need to be addressed on a federal level to create thriving black communities.

These points include the creation of rent controlled housing, moving towards 100% renewable energies, raising the minimum wage to at least $15 per hour and various other reforms.

“I like how they’re telling people what it actually entails, registering to vote,” Aidan Kiely said. “When I graduated high school at 18, they told me to go vote, but didn’t tell me what that actually entails.”

Kiely, 22, works at a cannabis shop in Kenosha and firmly believes in the importance of voting in the midterm elections. He applauds BLOC for teaching specific details about the voting registration process.

“Sending out information on how, when and where to register, request ballots, vote early and times and locations on Election Day,” Lue said. “We also made phone calls from home on Fridays reaching out to voters and potential voters.”

Outside of election season, BLOC focuses on asking people of color what a thriving community looks like to them. Johnson said that these conversations can go anywhere. It may be about adding a stop sign at the end of a street or ensuring more public safety in areas that see a lot of gun violence.

Johnson believes that voting should mean more to people than carrying out a civic duty. 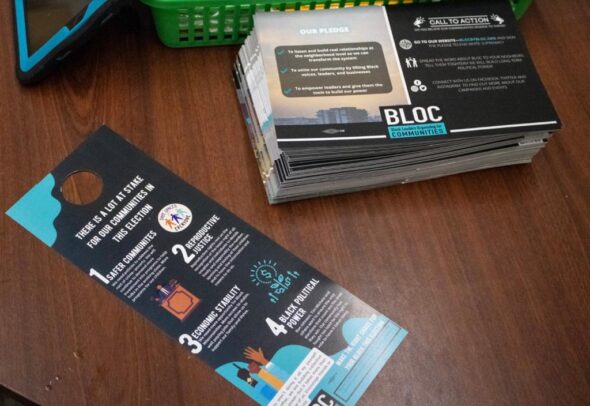 Nov. 5, 2022- Racine, Wisconsin. The back of the flier on the desk at the BLOC Racine office next to another flier, an ipad and Mandela Barnes stickers. Photo by Lauren Peacock

Lue and Johnson believe that work doesn’t end after one midterm election in one state of the country, and there’s a long road that follows.

“We have to shift the culture and reframe the conversation,” Johnson said. “It’s not going to be a fight to get justice and liberation tomorrow.”