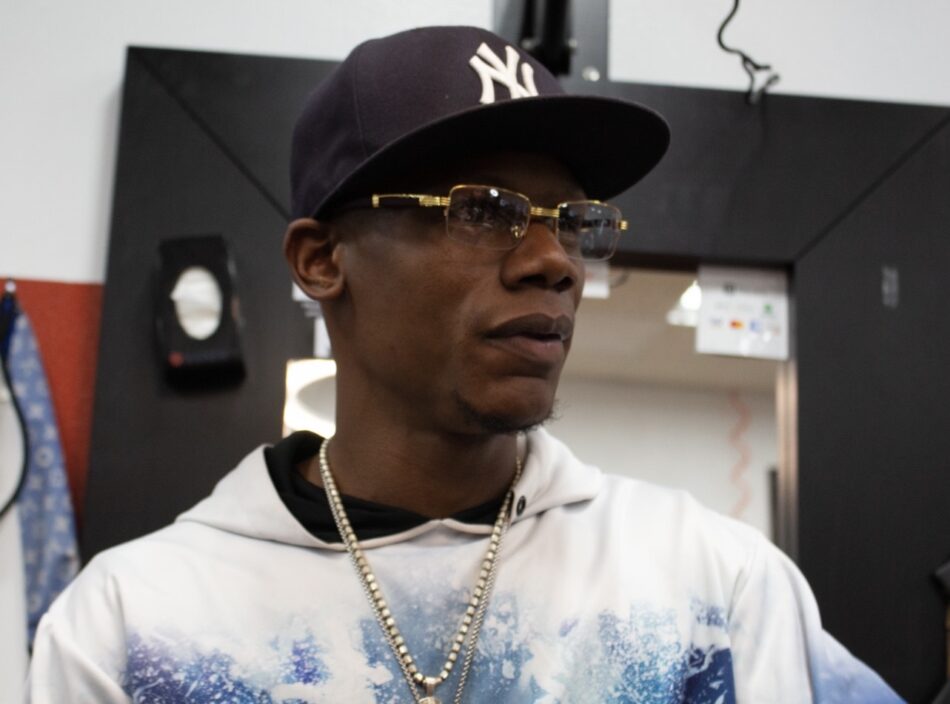 On the Sunday afternoon leading up to last week’s midterm election, the streets in downtown Racine, Wisconsin were close to vacant — a stark contrast to the bustling barber shop where six stylists worked on customers in squiggly chairs and blasted R&B music on the speakers.

The vibrant red walls, fluorescent ring lights and scattered photographs of legendary basketball scenes painted an upbeat atmosphere in Tha Illest Barber Shop, located in the South side of Racine. A black and white portrait of Marilyn Monroe sits next to a washed out wall hanging with slanted words that read, “dreams to reality”. It’s difficult to imagine that several of the employees are felons or that the barber shop itself had been the site of a stabbing just a few months ago. The incident occurred between the co-owner of the shop and a man who he says came and provoked fighting and violence.

Some of the employees at the barber shop won’t be voting because they lost their right as felons. Others won’t be voting because they’ve lost hope that politics will lead to change. After growing up in poor areas with high crime rates and frequent discrimination, these residents feel like their government has failed them — and it’s turned them off from any kind of civic participation. 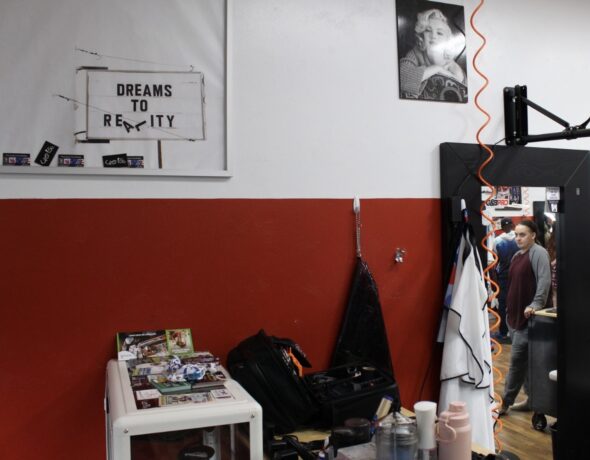 Ron Johnson, who won his campaign for re-election, has served as a US Senator representing Wisconsin for eight years. His campaign was largely focused on tackling crime and drugs, but not in a way that helps those stuck in the cycle of it, according to Michael Torres Peterson, a 39-year-old employee at Tha Illest Barber Shop. Rather than prevent crime in the Southern part of the city where violence is most prevalent, he believes politicans in the area have increased police presence and focused on keeping the safer areas secure from external threats. Peterson believes that the areas that need support from government services, have remained largely unaddressed.

Peterson says that he wouldn’t vote even if he had the right to do so. He feels that the tough on crime approach that Johnson has embraced, only leads to repetitive incarceration cycles with the same people in and out of prison. It also doesn’t help remediate the parts of Racine that are in need of crime reduction.

According to Crime Grade’s estimates, Racine has a crime rate of 47.58 per 1,000 residents. To put that in perspective, 82% of cities in the U.S. are safer than Racine.

Peterson says that in certain parts of the city, like the Northwest,which is considered safer, the streets look cleaner and feel safer than they did before — but they weren’t the areas that needed help. As someone who has been incarcerated three times, Peterson feels that increasing police presence in the south part of Racine only contributes to stagnant crime rates and increasing incarceration rates. He also says that sending people in and out of prison breaks up families, which leads the children of those in prison to follow similar paths.

Peterson doesn’t only blame the current senator though. While Johnson, a conservative politician, has served for eight years, Governor Tony Evers has served since 2019 and represents the Democratic Party. When he looks at his community, Peterson finds inadequacy from both parties and believes both remain equally self-motivated.

“When it’s beneficial to politics, to, to utilize the black vote, that’s when black people become important, and that’s when minorities become important.” Peterson said. “But other than that, only time you’re important is when they put you in cups and chains and throw you in the system.”

He says that the Democratic party may build their platform on diversity, but they often fail to follow through on commitments. On a local level, the minority communities that need the most help often remain underserved. 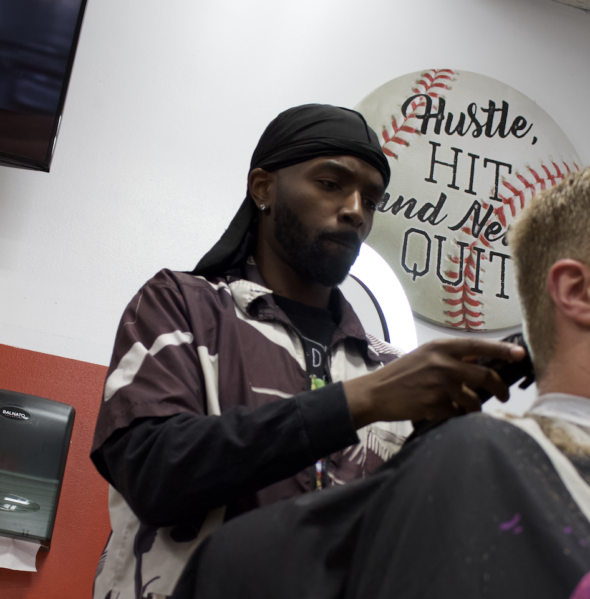 “Now you try to contact that person who is just smiling in your face and shaking your hand. You get their secretary, you get a voicemail, you get an ‘oh, we’ll call you back’, you might get an email,” Peterson said. “I’s not coming from that individual that just shook your hand, smiled in your face, and made you all types of promises.”

Peterson isn’t the only one to feel like politicians care more about the race than they do about making an actual difference to the people voting for them. In fact, when Jamie Peterson, the Chair of the Democratic National Committee (DNC), introduced Senate Candidate and Lieutenant Governor Mandela Barnes at his Kenosha rally on Nov. 6, he brought up a story that raised this exact issue. While canvassing for the South Carolina Democratic party in 2014, he recounts knocking on the door of an African American man who said he had no interest in voting. He was more concerned about the dirt road that he lived on getting paved; the road had remained untouched for multiple election cycles.

“Everybody has that proverbial dirt road,” Harrison said.”Because you have politicians who have made promises, but they don’t do them.”

Harrison shares this anecdote as a reminder to elect politicians that will carry out their promises and serve all residents of the area they’re elected in, a standard that he feels the acting senator hasn’t done. The example from 2014 reinforces the same message that Peterson feels in 2022.

“You all have something very different here in Wisconsin. You have leadership in folks like Governor Evers and Lieutenant Governor Barnes who have made promises,” Harrison said. “You all committed in 2020 because you all went to the polls and elected Joe Biden and Kamala Harris, who made promises and they have worked hard to keep them.”

Peterson’s coworker at the barber shop, Germaine Spears, 31, shares a similar perspective. Spears has never been incarcerated but has been branded by other traumatizing experiences. He vividly remembers checking in with his friend after a shooting in the area that occurred in 2013. He says that as he was walking and talking on the phone, he says he was aggressively confronted by police who accused him of matching the description of the shooter. He recalls this instance as his first negative encounter with police. Then, at age 26, Spears’ friend, Donte Shannon, died after being shot by police in a chase.

Even though he voted for Obama back in 2012, he’s lost all interest in politics in the years since. He’s seen too much suffering and not enough change to care about who gets elected next.

“Take Biden for example, he forgets what he says,” Spears said, referring to Biden’s promise to forgive student loans.

Spears, like many others, made financial decisions based on the expectation of student loan forgiveness and says he now has $20,000 of debt that he has to pay off. At some point, when people are struggling, they stop caring about the petty arguments between parties and hope for improvement in their lives.

Peterson and Spears, who have dealt with the same issues their whole lives, want to see visible change. For Peterson though, it feels like the two parties are more concerned with beating eachother down than with actually creating platforms that will make a difference for those in need.

“Why do you have to always exploit somebody’s negatives to get what you want in life?” Peterson said. “If you come into it with a negative agenda of pointing out somebody else’s negative agenda, why would I even want to vote for you?”

Peterson’s reaction to polarization is common among swing voters. According to a 2019 poll from the Kaiser Family Foundation that analyzed the 2016 election results, nearly a quarter of swing voters didn’t vote. This kind of turnout may explain why the election ended up being so close between Johnson and Barnes, a race that was expected to overwhelmingly lean conservative.

As the country continues to become increasingly polarized, swing states like Wisconsin are losing voters by focusing more on exploiting their opponent. Even in Barnes’ rally, he focused heavily on Johnson’s faults. While he encouraged the crowd to vote blue if they want to see change, he didn’t explicitly get into his plan of action to make change happen.

“There are no ads saying that, ‘Oh, thank you Ron Johnson for doing all this incredible work for us’, because he hasn’t, he hasn’t done anything for us,” Barnes said. “It is just wild to believe a person who’s been in office for 12 years doesn’t have a single positive ad about his campaign.”

Barnes even noted the fact that the speech primarily focused on Johnson and his failure to help communities in need.

“And I hate to go on and on and on about ’em, right?” Johnson said. “Because honestly, this should be about our values and our vision, and it is. That’s what the campaign is about.” 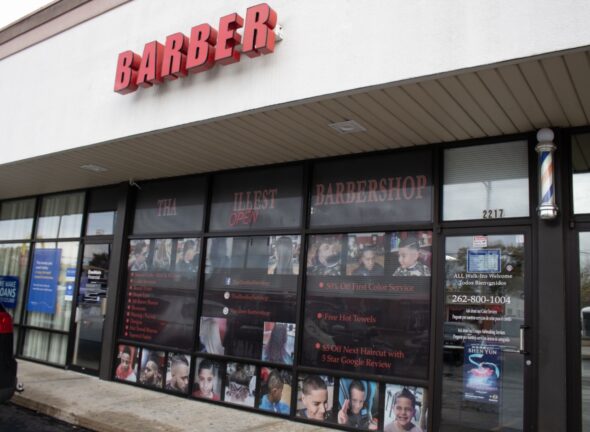 While Johnson focused less on his opponent, he also took part in shaming his approach to crime and mentioned that Barnes was ill-equipped for the job. Nikki Haley, who introduced Johnson, mainly discussed points in line with the larger party goals. Still though, she led a chant where she repeated the phrase, ‘not us, that’s them’, referring to all the shortcomings of the Democratic party platform.

Without attending either rally, Peterson knows the kind of rhetoric that politicians were taking part in because he’s seen it many times before. He doesn’t want to contribute to the negativity from both sides — what he wants is a better economy and life for people in his community.

With the exception of Trump, who gave out stimulus checks during the pandemic, Peterson says that he’s never received tangible aid from any politician. This is a factor that might change the way he views politicians.

“At the end of the day, like he did something,” Peterson said. “He was delivering money to people’s front doors. God bless Trump.”

Peterson made it clear that he isn’t a fan of Trump but his perspective demonstrates the importance of government aid. He went as far as saying that drug dealers contribute more positively to his community than the government does, because they’re providing some kind of monetary relief.

After years of stagnancy and financial qualms, people like Peterson and Spears have  given up. Moving forward, Spears said that the best he can do is educate his children and encourage them to stay out of trouble.

“I don’t even want to have any type of encounters. I don’t wanna be stereotyped,” Spears said. “I lost all hope to be honest.”