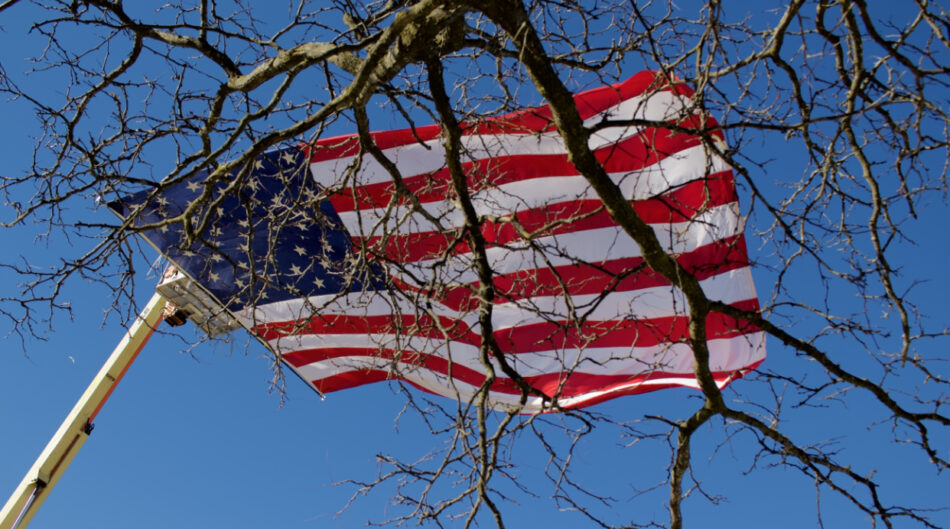 Wisconsin’s senator Ron Johnson, 66, quoted former president Ronald Reagan at a speech he made in Waukesha, Wisconsin earlier this month.

“Freedom is never more than one generation away from extinction,” he said.

Johnson was making a point about the future and his values. It is common for liberal politicians and activists to use the argument for the protection of future generations to emphasize the importance of climate change. For Johnson, this couldn’t be further from what he wants.

In spite of the blue sky giving way to the sun, the air is cold. A stage was put up in the parking lot for the day. As was the huge American flag dancing in the wind. The surrounding car’s bumper stickers share political party symbols and phrases. The rally held just before election day attracted an audience of predominantly white, middle-aged Americans. They whipped out their favorite colors: red, white, and blue, and put them in their hair, on their heads, accessories, and jewelry. In the next 48 hours, these voters will decide an incremental part of Wisconsin’s future. Today, they’re here to see the man they want to walk them into this future: Ron Johnson.

How the Republican incumbent for senate envisions the future is very different from his opponent, Lieutenant Governor Mandela Barnes. Throughout his rally, the conservative senator, who was first elected in 2010, emphasizes how he opposes change.

His followers in the audience repeatedly chant “we want our country back!” – a wish for how things were in the past. He declares his love for this country and uses an analogy, comparing the country to his wife.

”Imagine I wake up in the morning and say, ‘Jane, I love you and I’m gonna change everything about you,’” Johnson said. “That won’t go over very well, would it?”

For him and his supporters, the path into the future lies in rebuilding what used to be, the way it used to be. His opponent, Lieutenant Governor Barnes, sees the path to the future to be change and transformation.

“We can change the way things are done when we show up as we’ve never shown up before,” the 35-year-old said the night before, at an event for his campaign in Kenosha.

For many liberals, like Barnes, the future lies in renewable energies, a green economy, and fighting against a climate crisis. He supports and believes in opportunity in climate action in many ways.

Abortion, gas prices, Inflation: Looking at the campaigns and top issues talked about in these midterm elections, climate change did not make the cut.

While many of the impacts of climate change cannot be felt by most Americans yet, such as the rising temperatures’ impact on snow and glaciers melting and sea levels rising, others are becoming part of reality. Due to warmer ocean water temperatures, tropical storms are becoming more severe. Longer and more extreme droughts promote devastating flooding and boost wildfires. Data from the National Interagency Fire Center show that out of all wildfires in the US since 1983, the 10 most destructive have all happened in the years since 2004.

Wisconsin comes in seventh on the climate change index, a measurement calculating which states are most impacted by climate change. The impact is measured by drought, extreme heat, wildfires, flooding, and climate change preparedness. If an individual state can remain relatively safe in this scenario though, some voters question why they should care. Wisconsin, by this measure, is relatively safe.

While the environment did not take center stage on this year’s campaign trail, a poll published in January 2022 showed that a majority of voters in fact perceive the issue to be an “extremely big problem.” In this survey, the La Follette School of Public Affairs at the University of Wisconsin-Madison asked Wisconsin residents how much of a problem several issues were.

Climate change was named as a prime issue, with 59% of the 5,000 respondents believing it to be “at least quite a problem”. While 39% of respondents thought climate change was “an extremely big problem” on a national level, only 27% felt the same about climate change in the state. While 65% of Democrat voters believe it to be “an extremely big problem” on a statewide level, only 6% of Republican voters said the same – 34% believing it to be “not a problem.”

Democrat voter Mary Helen Prince voted early. The twenty-year-old student of Carthage College in Kenosha grew up in the neighboring state of Michigan. To her, climate change and climate justice is the most important topic, when deciding who to vote for. She researched every candidate before casting her early vote.

“I looked specifically for them to be aware that we are at a climate crisis,” she said. “Because if the candidate can’t even acknowledge that are, these are not the people that I want to be in charge.”

Alternatively, rally attendants in Waukesha call climate change a joke, an excuse to funnel money to the Democratic party. Conversations in the crowd circulated around how humans have been around too long to have made an impact. They mirror rhetorics that their candidate has used in the past. Throughout his political career, Johnson has assembled an extensive record of publicly denouncing the scientific evidence backing up the existence of a man-made climate crisis, such as his statement that he thinks that “climate change is – as Lord Monckton said – bullshit.”

“The climate has always changed and always will change, so I don’t deny climate change,” Senator Johnson said. “The question is, can you really do anything about it?”

Extensive scientific research proves man-made climate change. The intensity of human impact on the future of this planet is backed by organizations worldwide, including the United Nations. Still, our collective impact on the planet seems to be just another topic deepening the void between red and blue, right and left.

His actions speak differently. In his years in office, Johnson co-sponsored the Energy Tax Prevention Act, which aimed to prevent new rules on carbon emissions under the Clean Air Act issued by the U.S. Environmental Protection Agency. Just this year he was one of the Republicans voting against the Inflation Reduction Act, a measure that allocated approximately $369 billion for climate and clean energy programs. On the other hand, Barnes has voiced support for these bills as well as further federal legislation to address climate change.

Looking closer, between the lines, climate politics do seem to be an underlying issue, tying a lot of the big topics together. For the Republican party, nationwide and in Wisconsin, the focus of most campaigns is inflation, gas prices, and crime. At this rally too, Johnson touches on all of these topics

“You can’t end fossil fuel but when you try, guess what happens?” he said. “Duh. You know, gasoline prices hit record prices and it contributes to inflation, you know, skyrocketing crime.”

Much like in the rest of the US, Wisconsin’s Democrat campaigns put a great emphasis on the overturn of Roe v Wade and democracy being at risk ever since the Jan. 6 insurrection and legal battles surrounding voting. Johnson’s opponent Barnes turned the Republican senator’s string of arguments around at his campaign rally two nights before election day.

The young Lieutenant Governor explained how a clean power plan can provide hundred percent renewable energy for the state and, more importantly, create tens of thousands of good-paying jobs in the process. He builds on this foundation, in these opportunities and jobs, as a solution for problems like crime. According to him, in the past, the decline in opportunities led to an unfortunate rise in crime and violence.

He goes on to point out that, while the prices for gas have risen, oil and gas companies, oil and gas execs are making record profits. The Democrat accuses Johnson, who has been a senator for the past 12 years, to be standing with those companies instead of the people of Wisconsin.

“He’s standing against more money in the pockets of hard-working people in order to appease wealthy donors,” he said.

According to OpenSecrets, the energy sector funded Barnes’s campaign with almost $87,000, Johnson’s with $560,000 — almost $320,000 of which came from oil and gas. And Johnson does continue to swear by fossil fuels, which allegedly have among the highest impacts on climate change. He has claimed that the Democrats’ war on fossil fuels is the reason for the rising gas prices throughout his campaign.

The Republican has accused the Democrats of waging a war on fossil fuels before. At the Oct. 7 debate, just a month before Election Day, Johnson called the problem of the earth’s climate changing not solvable. He explained how he believes that investments in a greener future just don‘t make sense.

On the other side, Barnes emphasized the importance of reducing carbon emissions and how the state needed to move towards a clean energy economy and make sure Wisconsin is in the driver’s seat.

According to the United Nations, since the 1800s, human activities have been the main driver of climate change, primarily due to burning fossil fuels.

The young Lieutenant Governor is chair of the first-ever Governor’s Task Force on Climate Change. Tasked with proposing policy options that would help move the state closer to the governor’s goal of achieving 100 percent carbon-free energy by 2050, their mission is to help prepare the state for the impacts of climate change.

During the debate Johnson emphasized that wind and solar are not reliable, whilst his opponent promised to work towards energy independence, launching a national green bank, and funding clean energy projects upon election.

Where one sees a downfall, the other sees hope. Barnes highlights the economic opportunities that climate-friendly measures and regulations for industries such as farming and manufacturing can bring.  Meanwhile, Johnson holds onto his strong opposition to government spending addressing global warming, believing that these actions trying to control the climate simply hurt the economy.

While some attendees at Ron Johnson’s rally are convinced that climate change is a means to an end for the democrats to make money, student Mary Helen Prince has a different idea for the future.

In her opinion, people need to be more aware and stop taking on the burden of climate change. Instead, she says the responsibilities should lie with the leaders of the big oil companies and the plastic producers.

Climate change seems to be a poster child example of the division in this state and in the country between the two parties. Both candidates have a distinct vision for the future, values that drive them. One supports the acts that the other condemns. While one sees the future in fossil fuels, the other sees opportunities in anything but it. It’s one of the topics most by the outcome of the election. Barnes, the liberal governor in his mid-thirties, would have probably taken the state in the opposite direction of his antagonist, conservative winner Senator Johnson. For better or worse, climate change will most probably not take center stage in Wisconsin’s senator’s politics.