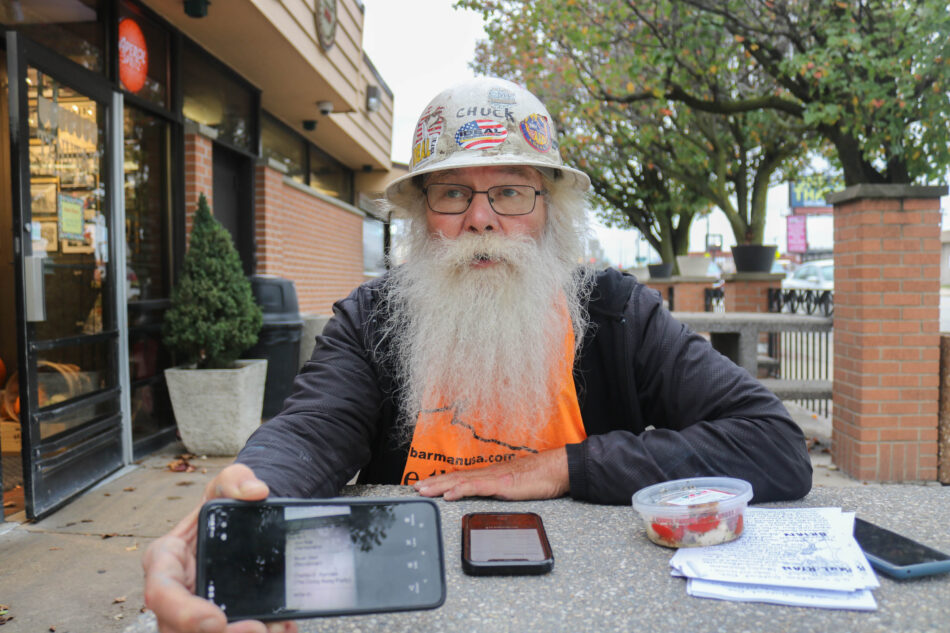 Chuck Barman, conspiracy theorist and candidate for U.S. Congress, holding a photo of his name on the 2022 ballot. Photo by Ryan Schwach

He believes that UFOs are real, 9/11 and the JFK assassination were inside jobs, and that the moon landing was a hoax.

He also wanted to be the next representative for the first Wisconsin congressional district.

Barman is a 67-year old man from Indiana with a sizable white beard convincing enough that he has actually played Santa Claus in commercials for both K-Mart and Sears. He is currently running as a third party candidate in the already contentious congressional battle between incumbent Republican Bryan Steil, and Democrat Ann Roe.

Steil got reelected on Tuesday, beating Roe 54 percent to 41 percent.

“They thought that was funny,” he said.

He considers himself to be a far-right Libertarian, strong on the Second Amendment and immigration, but is also pro-choice.

His party, “The Going Away Party” which is named for a joke in the late 60’s sketch comedy show “Rowan and Martin’s Laugh-In,” will appear third on the ballot, which is something Barman is putting stock in, along with general frustrations with the Republicans and Democrats.

Raised as a farmer, the grandson of union organizers, Barman has worked as a construction superintendent, managing the assembly of multi-million dollar high rises in Downtown Chicago, and also ran a heating and cooling company which had several Chicago-area Pizza Huts under contract.

“I didn’t really know too much about politics or paid attention to it,” he said.

That changed in 2006, when Chicago’s former mayor, Richard Daley, wanted to put a train through his town, and take some of the land from adjacent farmers.

“So I went and tried to stop this…I did not want the city of Chicago to be in our area,” he said “And the train tracks were close to our farm.”

This led him to his first Congressional run, he lost, and then ran again in 2008. 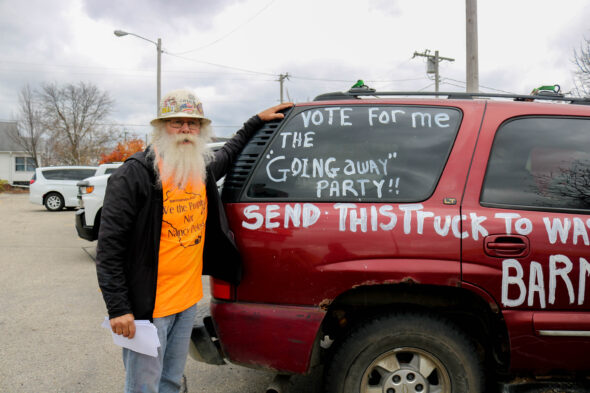 Chuck Barman standing next to his campaign truck, which is painted with phrases including “send this truck to Washington!!” and “BarmanUSA.com.” Photo by Ryan Schwach

However, no train was ever built.

Flooding is the other major issue that affected his old home in Indiana, as well as in Kenosha.

“When the rain is bad in Chicago, they back us up in Northwest Indiana, and they back us up in the Fox River and then in the Des Plaines River here,” he said. “So when I moved up here 12- years ago, they did the same thing. The water is all connected to Chicago.”

If Barman had won, clearing up the water issue would be his first priority.

“I want to stop them from flooding us here in Wisconsin,” he said. “The first thing I’m going to do is I’m going to get this water figured out.”

Now in 2022, Barman is running for office again, this time with his “Going Away Party”. He’s arguing that Steil is nothing more than his predecessor, Paul Ryan’s puppet.

“Paul Ryan is still our congressman,” he said.

Barman’s ideals, which could be considered dangerous and harmful to many, come from a deep sense of distrust and even hatred for the powers that be, from both parties, he makes it known he didn’t vote for Donald Trump, and has voted for both Republicans and Democrats throughout his life.

“When it comes down to it, I hate my government. I hate them,” he told Pavement Pieces. “Our government’s done nothing but wage war. That’s the only thing they do. Vietnam War, World War One, World War Two. That’s their industry.”

He uses the flooding issues as an example, where the policy of officials in a major city like Chicago harms the rural counties in neighboring states. He also talks about political games played by leaders that harm trade, especially trade that feeds farmers like himself, like when then Vice President Biden called out Vladimer Putin.

“He [Putin] stopped buying milk and cheese from our country. And it went down to $9, and it put farmers out of business, completely out of business, not just here, not just in Wisconsin, where King is cheese, New York, Ohio, Illinois, Indiana,” he said.

He also called out the Covid closures, which shut his farm and forced him back into construction.

The distrust is not exclusive to Barman, it was the same distrust that pushes the January 6 rioters, who Barman refers to as “idiots” who never should have gone to D.C, and many other Republican voters.

“They are liars and they’re cheaters and they’re thieves,” Gary Mills, a 63-year old from Watertown, Wisconsin, said. “They have been blatantly lying to us.”

Barman had a lot of optimism heading into Tuesday, despite fundraising zero dollars, and a member of Steil’s campaign only remarked that they knew Barman had once played Santa Claus.

However, Barman remained optimistic up until election results came in, hoping his distrust is not uncommon among the voting public of the first congressional district.

“When you do that, and you vote like that, that’s a protest vote,” he said.