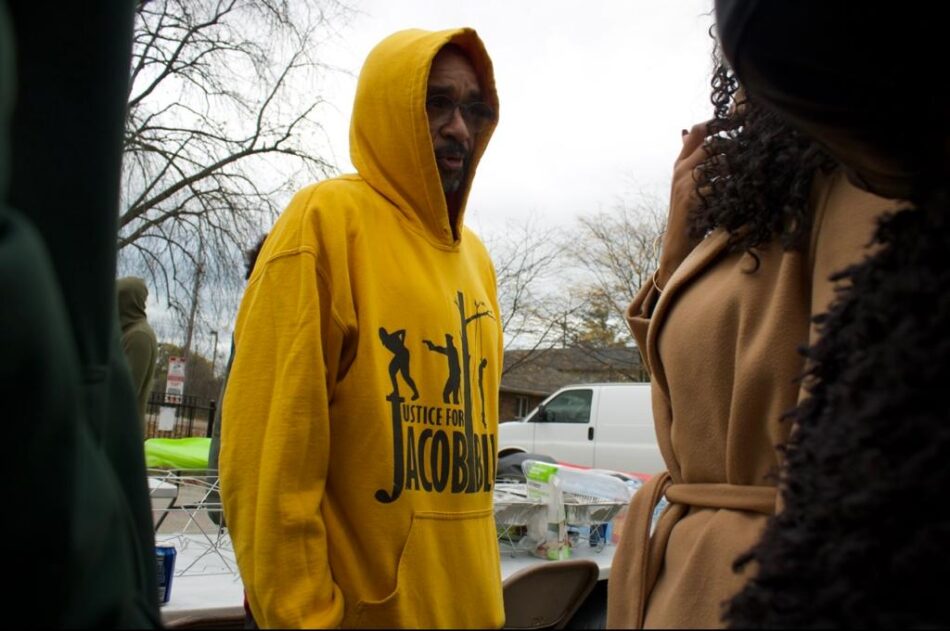 Jacob Blake’s Uncle, Jaden Blake, encouraging people to vote at a block party just feet from where his nephew was shot by the police. Photo by Ryan Schwach

In 2020, Kenosha, Wisconsin became a place synonymous with gun violence. The city saw the shooting of Jacob Blake by Kenosha Police, and the ensuing protests during which Kyle Rittenhouse shot two people. Fast forward to election day 2022, and Wisconsin voters are divided when it comes to guns with some favoring gun control and others fighting to ensure they have the right to bear arms.

Lt. Gov. Mandela Barnes (D-Wis.) is running against incumbent Sen. Ron Johnson (R-Wis.) in the Senate race this week. While the National Rifle Association (NRA) has endorsed Johnson for his support of the Second Amendment, the Giffords Law Center to Prevent Gun Violence has endorsed Barnes for his mission to enact gun reform.

On the Johnson and Barnes campaign trails, voters w ere reflecting on 2020 — a year in which Wisconsin made headlines for two separate shooting incidents.

Linea Anthony, 73, has lived in Racine, Wisconsin for 25 years. She says that when the founding fathers wrote the second amendment, they didn’t want people to have assault rifles.

“I want gun control and I want sane gun laws,” Anthony said as she reflected on the gun violence in her community two years ago.

While many Wisconsin voters agree with Anthony, many also believe in self-defense and the right to bear arms.

John Stacie has an originalist view regarding guns and believes they are a vital form of protection. The 45-year-old from Sussex, Wisconsin says if anything were to happen in his community, he’d want to be the first in line to protect the people.

“I am passionate about gun rights because that is our founder’s way of keeping our people safe,” he said.

On Aug. 23, 2020, a 29-year-old Black man, Jacob Blake, was shot seven times in the back and left partially paralyzed by a police officer in Kenosha, Wisconsin. Following this shooting, various protests and riots broke out throughout Wisconsin. This incident happened during the height of the Black Lives Matter movement as many people were expressing their frustrations with the power of firearms.

Jean Lockwood, a 48-year-old woman from Kenosha, lives half a block away from where Blake was shot. She was one of the first people there when it happened and remembers thinking he shouldn’t have been shot and the police “were just a little too trigger-happy.”

Lockwood is also supportive of the right to bear arms and believes citizens should be able to arm themselves with firearms. 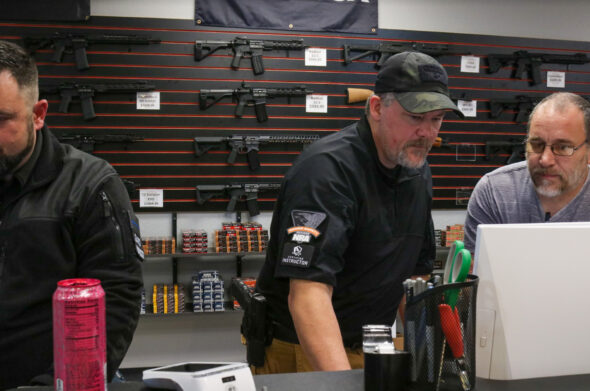 Workers in the middle of making a gun sale at Paladin Protection Academy in Kenosha, Wisconsin. Photo by Ryan Schwach

“I believe that as long as you own it legally, you should be able to have a gun because it’s our right,” she said.

Two days after Blake was shot, Kyle Rittenhouse, a 17-year-old Caucasian male from Antioch, Illinois, fatally shot two men with a military-style semi-automatic rifle and wounded another man in Kenosha during protests.

“He defended himself,” Stacie said. “He had a reason to be there and you can open carry wherever you want in Wisconsin. They started showing force to him.”

When the Kyle Rittenhouse trial began the following year in November, citizens in Kenosha began to equip themselves with firearms for self-defense.

“Kenosha burned,” Jenni Gard, a trainer at Paladin Protection Academy, a gun shop in Kenosha, said. “People were panic buying and we were selling not only the guns, but the ammo, body armor and helmet. People were buying every which way to Sunday.” 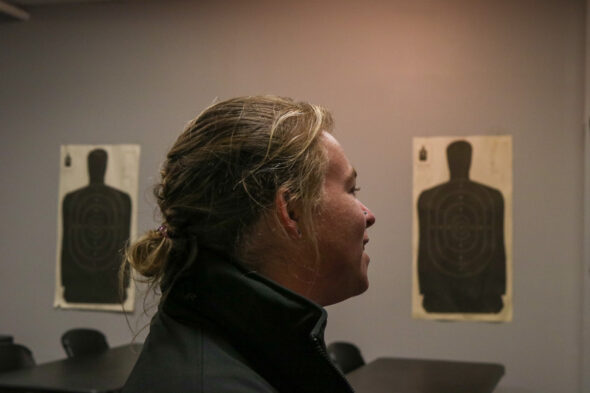 Jenni Gard, a trainer at Paladin Protection Academy, a gun shop in Kenosha, has been with the shop since it opened in January 2021. Photo by Ryan Schwach

Gard remembers there being a huge uptick during the trial and she had more first-time gun buyers than ever come in who had never owned a gun before.

While some residents of Wisconsin were buying firearms, others got passionate about gun control.

“The Second Amendment does not give people the right to just do anything they want with guns,” Anthony said. “We don’t need assault rifles and things of that nature.”

Anthony said universal background checks and a way to monitor when individuals use their guns are necessary measures to ensure safety.

On average, 621 people die and 1,093 are wounded by guns in Wisconsin per year; the state has the 34th-highest rate of gun violence in the country, according to 2021 data from Everytown, the largest gun violence prevention organization in America.

“Wisconsin has not been immune from gun violence and that’s definitely because of all the weak gun laws,” Nicholas Matuszewski, a policy and strategic partnerships associate at the Wisconsin Anti-Violence Effort (WAVE), said. “Wisconsin, as with a lot of purple states, have laws that don’t really align with the overall will of the majority of Wisconsinites.”

According to Wisconsin gun laws, a person must be at least 21-years-old to purchase and carry a firearm from a firearms dealer and at least 18-year-old to possess or hunt with a firearm. Open and concealed carry is permitted in Wisconsin, although a license is required.

In terms of gun law strength, Everytown has given a composite score of 27.5 out of 100 to Wisconsin and has said they have “relatively weak gun laws.”

Earlier this year, Everytown spent about $1 million in advertisements urging voters to oust Sen. Ron Johnson and accusing him of enabling gun violence. “Mass shootings, school shootings and violent crime are on the rise, and Ron Johnson is making things worse,” the new 30-second ad says.

“Essentially we have the right to refuse the sale at any point in time,” Gard said. “We have an ethical obligation that if we think someone is doing something illegal with the gun or not purchasing it for themselves, we can refuse the sale.”

“You know it’s not a complicated issue. It’s not a controversial issue except for whatever reason in the halls of state legislatures and in the halls of Congress,” he said. “Those are the only places in the entire country where this is really a controversial issue, but that’s because of the power of the gun lobby. The NRA has been pushing against universal background checks for a really long time.”

WAVE is also pushing for extreme risk laws, which are policies that would allow someone to petition a court if they think someone is a danger to themselves or others.

“We’re not trying to take guns away from everyone,” Matuskzewski said. “That’s just a myth pushed by the gun lobby. We are trying to ensure that people that shouldn’t have guns — people with felonies or dangerous records or have been involved with domestic abuse  — those people should not have access to guns.”

In the 2020 presidential election, about 49.4% of Wisconsin voters voted for Joe Biden, while about 48.8% voted for Donald Trump, showing it was an extremely close call in the state. The midterms are expected to be just as close to call, with the race between Sen. Ron Johnson and Lt. Gov. Mandela Barnes coming down to the wire.

If voters elect Johnson, Wisconsin should expect a continuation of the current gun laws with some loosening, and if voters elect Barnes, gun laws could become stricter.