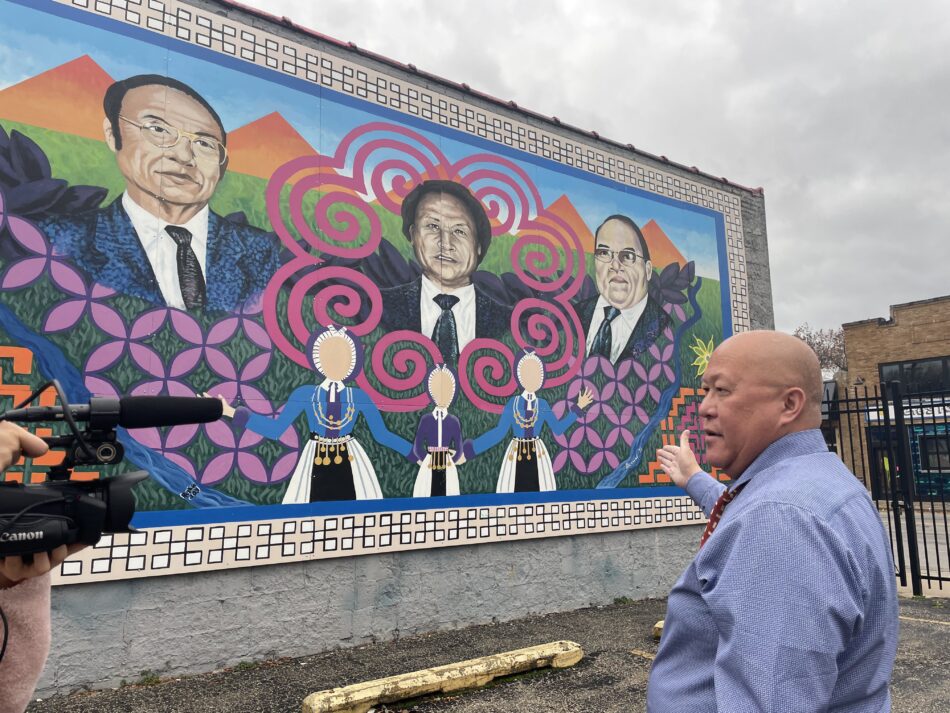 Nov. 5, 2022- Milwaukee, WI: Scenes from Hmong American Friendship Association. Amoun Sayaovong, the assistant director at the HAFA, is introducing the mural on the wall at the HAFA’s entrance. Photo by Helena Cheng.

You wouldn’t notice anything out of the ordinary when you walk into the community on the north side of Milwaukee, Wisconsin.

Old-style duplexes and cottages are neatly located in quiet neighborhoods and children’s toys are scattered on front doors. Political signs are scattered across lawns throughout the area and most of them have: “Tony For Wisconsin” and “Mandela Barnes For Senate” written on them for the election season. This is the neighborhood where the largest group of Hmong people, used to be a Chinese ethnic group, live in Wisconsin.

Ever since the Hmong began coming to the United States around the late 1970’s as refugees after the Vietnam War, they brought diversity into the local political opinions, business models, and community cultures. In the past few years, Hmong people are more and more seen in the public sphere. Peng Her, the CEO of the Hmong Institute in Madison, Wisconsin ran for lieutenant governor as a Democrat last year. The Hmong community just had their first Olympic gold medal winner, Suni Lee, back in the Tokyo Olympics. Since Hmong people have been actively engaged in local and national affairs, their votes were also valued by this year’s candidates .

When Amoun Sayaovong first came to America, he was only about four years old. He was born in Laos and his family was one of the first Hmong people who fled to the United States in 1978. As he grew older, he found his passion in law and practiced it for more than 15 years after graduating from law school at University of Michigan.

Hmong people in this community tend to maintain a tight connection with each other. Even if some of them leave their community to pursue careers, at some point in their lives, they always come back to the community to give back. Just like Sayaovong, he came back to Milwaukee and assisted in the local community center, the Hmong American Friendship Association, after his  law career.

“I think it’s because of the collectivistic and communal traditions of Hmong people,” Sayaovong said, recalling memories of his community. 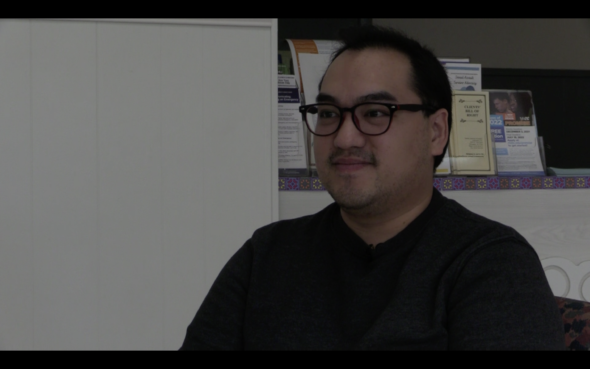 According to the U.S. Census Bureau’s 2019 American Community Survey, Milwaukee County had the largest total Hmong population in Wisconsin with 12,566 people, which makes them the largest Asian American ethnic group in Wisconsin. Some of the senior family members, like Sayaovong’s uncle, fought in the Vietnam War. However, most of the Hmong people who currently participate in community affairs are between the ages of 18 to 40.

“So the Hmong community is actually very young if you think about it.” Sayaovong said.  “Most of the older generation have passed and the younger population tend not to pay attention to politics as much.”

Andrew Xiong, however, demonstrated that the younger generation does preserve their own interests in political campaigns. 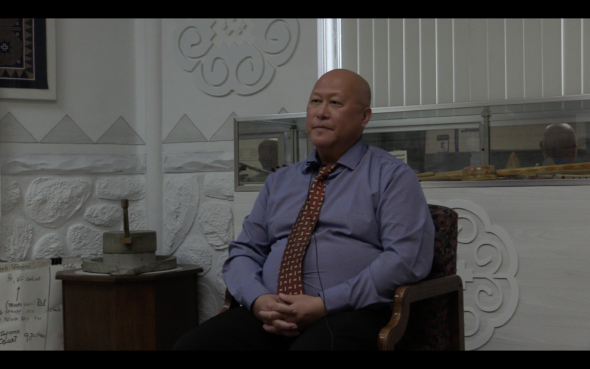 As the 30 years old Milwaukee County Comprehensive Community Services Administrative Assistant, Xiong has been exercising his voting right since he turned 18. He had a normal American childhood and later found his passion in Anthropology in college, with a special focus on the history of the Hmong community.

Xiong has a history of favoring the Democratic party’s policies on critical issues. He mentioned how Gov. Tony Evers announced back in May that stimulus money of $86 million will be used to support small businesses and community businesses in underserved communities.

“​​Historically here in Milwaukee, we have had great support from the Democratic party,” Xiong said of the reasoning behind his vote. “We haven’t received a lot of support from the Republican side.”

Traceable and consistent support from Democratic candidates was rendered to the Hmong community to address specific issues that they are facing. Many veterans like Sayaovong’s uncle have been suffering from mental traumas and they need more proper guidance on treating mental health. In 2021, Gov. Tony Evers issued a $2 million investment to the Wisconsin United Coalition of Mutual Assistance Association, Inc. (WUCMAA). This funding supports mental and behavioral health services for underserved communities like Hmong and other Southeast Asian Wisconsin residents.

When asked what kind of campaigns work the most effectively for local Hmong people, these two different age groups gave similar answers while they shared different emphases on local issues during the election.

“Hmong tend not to pay too much attention to regular media, they are an insular community,” Sayaovong said. “​​So the politicians who come into the Hmong community and shake a Hmong hand, that’s automatically a vote for that person.”

To the elders in Hmong community, the language barrier and their reliance on word of mouth communication impacts how they get information. Seniors in the community do not watch TV often and mostly listen to the Hmong language radio. So they are influenced by events like Mandela Barnes’ visit to the Hmong community, where he greeted the community representatives. Very often they cast their votes based on perceived familiarity with candidates.

The younger generation, who are more exposed to social media, also appreciate the gesture of candidates coming to the community in person. Still, most of them are the main labor force and support for their families, so they tend to pay more attention to practical policies and actions.

Tony Evers showed up at a Hmong’s Golden Egg Rolls cafe in La Crosse in August to support small businesses, just two months before he signed an order to lower the flags of the United States and the state of Wisconsin to half-staff in honor of Hmong-Lao Veterans Day.

“We value those individuals who can show up when we call them to show up,” Sayaovong “And that’s what garners our friendship and our lasting support.”