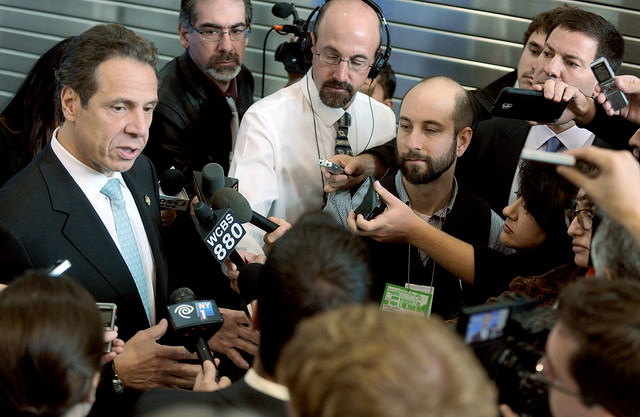 Governor Andrew Cuomo is the mastermind behind this creation, despite already belonging to the Democratic Party. The new group – an extension of his Women’s Equality Agenda, which the state legislature has not passed – has received mixed reviews not only from the Republican opposition, but also from women whose lives Cuomo proposes to better.

The 10-point Women’s Equality Agenda seeks to improve many aspects of women’s lives, including pay equity, access to abortion and protection for domestic abuse victims. The state legislature has not adopted any of the 10 points since Cuomo introduced them in January 2013.

With campaign season in full swing, Cuomo is once again promoting this agenda. The governor has visited Albany, Syracuse and Rochester in his tour bus, the “Women’s Equality Express.” He has also released a campaign ad with his three daughters and Sandra Lee, his girlfriend.

“New York State is the equality capital of the nation, but we still have more to do,” Cuomo said in a speech announcing the Women’s Equality Act. “Not everyone has reached full equality in our society.”

Cuomo’s opposition disagrees. Zephyr Teachout, who lost to Cuomo in the Democratic primary, said, “A lot of times I just see it as half a million dollars to get the name ‘Women’s Equality Party’ next to ‘Andrew Cuomo’ on the ballot—a high-priced advertisement.”

New York has not updated its abortion laws since 1970. The access to abortion provision of Cuomo’s agenda would permit late-term abortions on the grounds of preserving the mother’s health, including emotional and psychological factors. The current law allows abortions after 24 weeks only in order to save the mother’s life.

Support for Cuomo comes from those who are thrilled finally to have a prominent elected official who isn’t running away from the more controversial women’s issues, such as access to abortion.

NARAL Pro-Choice New York has publicly endorsed Cuomo. Tara Sweeney, director of communications for the organization, said, “It is absolutely right and necessary that he championed a bill and a provision that will improve women’s lives and set a precedent for the kinds of legislation we should be passing.”

The anti-abortion community has spoken out against the bill. Executive director of NYS Right to Life, Lori Kehoe, said, “It makes clear the reality that this abortion ‘rights’ movement cares as little about women as they do about children.”

The Women’s Equality Agenda has been a hallmark of Cuomo’s work from the beginning of this legislative session, and “that stayed exactly the same when he transitioned into campaign mode,” according to Sweeney.

Under New York election law, candidates can run on multiple party lines, allowing their names to appear more than once on the ballot. Electoral fusion occurs when two or more political parties list the same candidate, pooling the votes and giving minor parties more influence over the results.

With the creation of this new party, the governor will appear on four ballot lines on Election Day: Women’s Equality, Democratic, Independence and Working Families. The last of these parties endorsed Cuomo after he suggested undoing his previous refusal to support a Democratic takeover of the Senate leadership. Cuomo said in a video shown during the Working Families Party convention in June, “To make this agenda a reality, we must change the Senate leadership.”

Cuomo recently endorsed his first Democratic candidate for the State Senate, Adrienne Esposito. But at a rally on Oct. 11, she was not offered a speaking spot. The rally promoted the Women’s Equality Party, a ballot line on which Esposito will not appear.

Supporters of Teachout issued a statement opposing the Women’s Equality Party: “This new party is not for women; instead it is using women for political play.”

Cuomo has exhibited strong leadership on same-sex marriage and gun control, but his economic policies have not always been favorable to women. Earlier this year he blocked New York Mayor Bill de Blasio’s plan to raise the city’s minimum wage. More than six in 10 of those workers are women, according to the National Women’s Law Center. Women are also the majority of workers in the hospitals that Cuomo has allowed to close.

Caron Gentry , an expert in feminist theory and gender studies who taught at Abilene Christian University in Texas and is now a lecturer at the University of St. Andrews in Scotland, said, “I think it’s great to raise awareness about issues, but if it is a ploy or a manipulation, then there is a problem in that the issue of gender is not understood in all its complexity or the promises will be abandoned.”