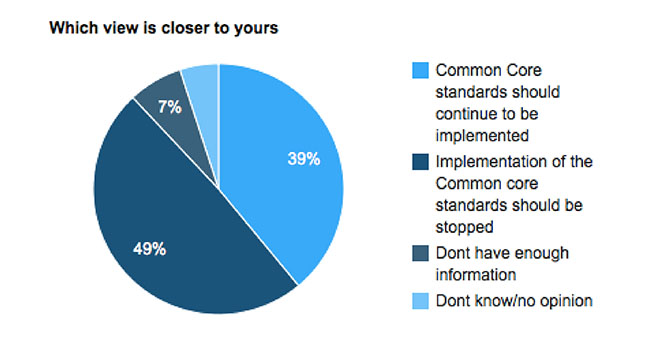 Public support for the education policy known as the Common Core standards has been free falling in New York State since Governor Andrew Cuomo implemented it in 2012. For Cuomo, it has become an issue in the upcoming elections.

Cuomo, a Democrat, leads his Republican opponent by 21 points, according to the latest Siena poll. But the question is what mandate he will have after the election, said Lawrence Mead, New York University professor and expert on American politics.

Teacher unions, which hold a lot of power in the Democratic Party, now oppose the Common Core. New York State United Teachers withdrew their support at the beginning of the year and asked for “major course corrections to its failed implementation plan,” in an official statement. Depending on the electoral results, Cuomo could face pressure to act on the Common Core issue.

The opposition against the education standards, a set of academic goals from kindergarten through high school, began on the Republican side but has moved to be an issue in both major parties. According to Mead, Republicans think the federal government is overstepping and prescribing what teachers should teach. Democrats feel that the policy was developed through an undemocratic process that benefits big corporations and that it has been poorly implemented, with little preparation for the teachers or students, he added.

Common Core has become a buzzword over the past month. In 2013, 62 percent of people polled nationwide had never heard about it; in 2014, 80 percent of those polled said they had heard about it, and 47 percent indicated they had heard a great deal or a fair amount, according to a PDK/Gallup poll. Opposition has increased hand in hand with awareness: five out of 10 New York State residents answered that the implementation should be stopped in New York, according to the latest Siena Poll.

Cuomo has been challenged about it multiple times during the campaign. In the Democratic Party primaries, Zephyr Teachout, professor at Fordham University, campaigned against Common Core implementation. Cuomo won the primary but still faces opposition on the Common Core, this time from his Republican opponent, Rob Astorino, who has launched a “Stop Common Core” effort to rally voters against the cause.

After many months of not taking any clear stance on the matter, the Cuomo campaign released an ad on Monday pledging to “stop using Common Core scores for at least five years, and then only if our children are ready.” The campaign did not respond to requests for comment.

The implementation of the standards

Katie Lapham, a first grade teacher at P.S. 214 in Brooklyn, says she understands the benefits of standards as a framework that gives teachers “freedom to teach and students … freedom to learn,” but she strongly opposes the Common Core standards as they are.

“Our schools need smaller class sizes, common sense curriculum, teacher-created curriculum and teacher-created authentic performance based assessments, project based, meaningful, inspiring work,” she said, adding that New York State has created fixed curricula, instead of only giving a general set of goals.
Lapham, member of the Movement of Rank and File Educators caucus within New York State United Teachers, worries that the curricula do not help her students, adding that the ReadyGEN ELA English Language Arts program is “dull and uninspiring.”

“The vocab is not appropriate for the lower grades,” Lapham said. “Spending five to seven days closely reading a picture book is boring; an ineffective way to promote literacy.” She has many English-language learners in her class and is worried that taking a test that reflects negatively on their learning will impact their confidence and increase the number of dropouts.

Garth Wolkoff, a teacher at the High School for Public Service in Brooklyn, said that a set of standards that helps the students “be more analytical thinkers rather than to memorize … can’t be bad.” He likes the idea of teachers teaching less subject matter, but more in depth, giving students more analytical skills, but he finds the standards oppressive at the elementary school level.

The standards are “asking very young students like Lucy to read and do more math,” Wolkoff said, referring to his 6-year-old daughter. “Playtime has been taken out of kindergarten, for example, and she is learning ‘Common Core’ math.”

Parents and teachers are uniting to fight the Common Core tests. In April 2014, some teachers opted out of the test and many parents pulled their kids out of school the day of the test. Although there are no exact statistics yet, there were some 1,000 students who refused to take the math test in New York City, according to City Councilman Daniel Dromm. The Journal News reported that more than 3,000 students in the Lower Hudson Valley opted out, a fourfold increase compared with the previous year, according to the newspaper.

The MORE caucus within the teachers union is one of the most outspoken critics of the Common Core. The testing was “produced not by teachers, but by corporations,” MORE’s official statement reads. The movement argues that the standards “were written without meaningful teacher input, and educators do not have the freedom to use them as they see fit.”

Teachers and parents fear that the standards are too focused on “college and career readiness” to the detriment of “civic-mindedness, student health, and social and emotional growth,” according to the MORE statement.

Lapham said that, because of the emphasis on the tests, students “are not getting what they need both academically and emotionally.”

“If Cuomo is re-elected, expect more of the same,” Lapham added. “However, parents and teachers will continue to speak out. (The) grassroots movement is growing. Expect more and more opt-outs in the spring.”

Education standards are unlikely to be a decisive factor in the elections, but the Common Core will continue to be an issue in the political arena.