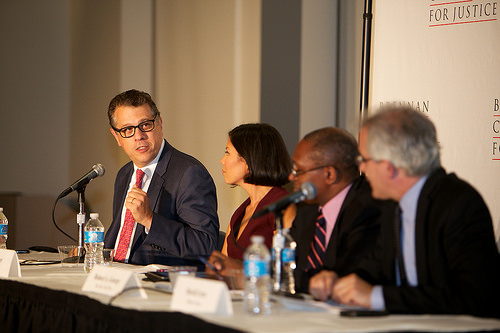 What are this year’s midterm elections about? The answer is: nothing.

That was the verdict given by panelists at a pre-election primer on the state of US democracy. The three panelists are all journalists: David Corn, Washington bureau chief for Mother Jones magazine, New York Post editorial writer Robert George and Alex Wagner, host of MSNBC television’s “Now with Alex Wagner.”

“What’s at Stake for 2014 and Beyond?” was hosted by Mother Jones and the Brennan Center at New York University School of Law. Brennan Center president Michael Waldman moderated.

Corn said that, with no major theme, “these elections seem to be about nothing – about apathy.” Polls show lower voter engagement and motivation this year than in 2010, the previous midterm elections. He cited a Gallup poll taken in late September that put voters who have given “quite a lot” or “some thought” to elections at 33 percent compared with 46 percent in 2010. “Extremely motivated” voters came in at only 32 percent versus a whopping 50 percent in 2010.

On Nov. 4, those who do vote will choose all 435 members of the House of Representatives; a third of the senators and many state-level offices including governors.

“Voters have been so preoccupied with the political gaffes they don’t give attention to substantial policies, and that is what depressed voter turnout,” Wagner said.

Despite an improved economy and a 5.6 percent drop in unemployment, George quips, these are “Seinfeld elections” in that they seem to be about nothing. He warned of internal fighting in the Democratic Party, buoyed by President Barack Obama’s forays back into the Middle East to support Arab countries against the Islamic State in Iraq and Syria.

Obama faces criticism for not “articulating an economic narrative” for his final two years in office, as Waldman phrased it.

“The president has a bigger role as storyteller-in-chief,” Corn said, adding that Obama has failed to engage people with a narrative of where the country is headed in spite of having much success in 2010 at “telling a continuous story of the politics of this nation.”

Panelists also discussed what the political landscape would look like if Republicans were to gain a majority in the Senate.

“One envisions a post-apocalyptic scenario where [Republicans] are gathering to write these horrible bills that pass and the president is just there with his veto pen,” but that might not happen, Wagner argued.
Republicans have not united around a single agenda in these elections, and they have important issues to work on before the 2016 presidential race.

“Immigration is a wild card” that Republicans should play, George said, especially given the Democrats’ inability to pass immigration-reform legislation.

On the foreign policy front, George said, a Republican Congress could find itself in agreement with Obama’s policies, although Republicans might choose to go further than he has in intervening to stop ISIS, for example.

On this matter, Wagner said there could be consensus between Obama and Congress, but there could be great debate. Security policies seen as residues from George W. Bush’s presidency will be “litigated” a lot in the next two years, she added.

“I do not think the elections will usher in a new political era,” George said, ending on a grim note. ISIS, voter suppression laws and immigrant voters discouraged by the lack of immigration reform are only some of the reasons why.