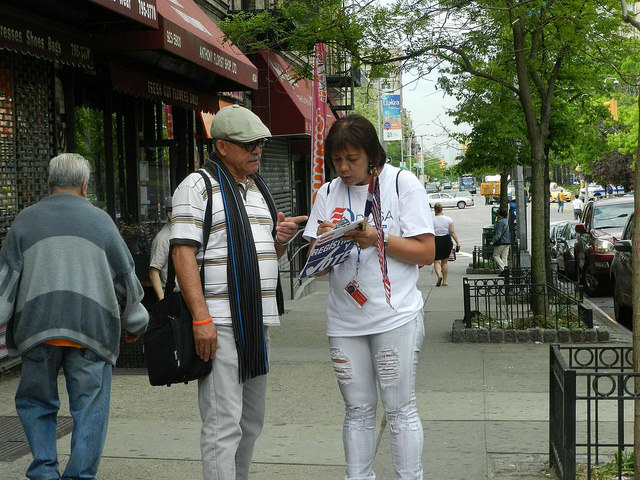 The speaker looked up at a PowerPoint slide that showed a funnel with two labels: “Latino population” at the wide top and “Latino voters” at the narrow bottom.

“The funnel is just how I think of it,” Angelo Falcón, president of the National Institute for Latino Policy, a nonpartisan group, told the audience. “Up top we have this enormous Latino population in the U.S., but then that trickles down to the number that are eligible to vote, fewer that are registered, and even fewer who actually cast a ballot.”

As Election Day, nears, questions of how to increase Latino voter turnout and address obstacles facing Latino voters have been pushed to the forefront. Falcón was one of four speakers at “The Latino Vote In 2014” panel on Oct. 15 hosted by the Brennan Center for Justice, a nonpartisan institute affiliated with New York University School of Law.

In the recent past, Latinos have strongly supported Democratic candidates — with President Barack Obama winning 71 percent of the Latino vote in 2012. But, with the failure of the Democratic Party to pass comprehensive immigration reform, the Latino vote may no longer be taken for granted.

On Nov. 4, the U.S. will hold midterm elections for all 435 seats in the House of Representatives and 33 of the 100 seats in the Senate, as well as other regional positions on a state-by-state basis. Democrats could lose their majority in the Senate, further polarizing the legislative and executive branches and impeding action in Washington.

As their population grows, Latinos have become an increasingly important voting bloc. According to the Pew Research Center, a nonpartisan group, Latinos make up 11.3 percent of eligible voters. Between now and 2030, Latinos are expected to account for 40 percent of the growth in the U.S. electorate.

Latinos have historically failed to turn out to vote, however. During the last midterm elections, in 2010, only 31.2 percent of eligible Latino voters cast their ballots, as compared with 44 percent of black voters and 48.6 of white voters.

The reasons behind this funnel effect are numerous, and Latino organizations are striving to combat this trend. Some organizations have used National Hispanic Heritage Month, which is celebrated from Sept. 15 to Oct. 15, as a platform for mobilizing the Latino community. Groups that work to educate and empower Latino citizens, such as Voto Latino and Make the Road New York, have held voter registration drives and used social media to encourage Latinos to make their voices heard.

“For our heritage, let’s defend our rights/reshape our Government #PowerofOurVote,” Rosario Dawson, Latina actress and Voto Latino chairwoman, tweeted on Oct. 10. Latinos are the nation’s youngest ethnic group, with the median age at 18. The #PowerofOurVote hashtag has become a part of the mobilization effort as organizations use Twitter to connect with young voters.

Daniel Altschuler, a coordinator for Make the Road New York, has registered over 5,000 Latinos since August.

“Our message to the people in the community resonates,” Altschuler said. “It is that people need to go out in November to vote for their families. The Latino community needs to expand its political muscle.”

Latinos have failed to register and vote for legal and logistical reasons.

“As a general demographic, Latinos and other low-income groups tend to move a lot and are unaware of the change-of-address forms necessary for renewing their voter status,” Altschuler said.

Myrna Peréz, a director at the Brennan Center for Justice, said that there is “a partisan and racial component” to new, stricter voter identification laws in states such as Texas.

Jorge Mursuli, a panelist representing Dominicanos USA, which works to educate and mobilize Dominican American voters, said that the issue goes far beyond “red” versus “blue” state, however.

“You would think that in a state like New York where Latinos have a relatively sure political footing things would be better,” Mursuli said. “But there have been many challenges.”

Mursuli described his experience during 2010 midterm elections when poor signage, lack of Latino poll workers and utter incompetence at poll sites deterred many registered voters. Of the dozen or so voting sites Mursuli visited in the Bronx, a borough of New York that is over 50 percent Latino, he saw not a single Latino poll worker.

Beyond registration and Election Day issues, the national spotlight on immigration concerns may further impact Latino turnout on Nov. 4.

In a 2013 poll conducted by Latino Decisions, a nonpartisan think tank dedicated to Latino political opinion research, 75 percent of Latinos surveyed said it was extremely or very important for Congress and the president to address immigration reform within the year, even in light of other issues facing the government.

One year later, comprehensive immigration reform remains an unresolved issue. After Obama did not fulfill his promise to provide deportation relief to undocumented immigrants by the end of the summer, many Latinos became disillusioned.

“There is obviously grave disappointment with Congress and the Obama administration for not taking proactive steps to stop the separation of families,” Altschuler said.

According to Gallup Polls, Obama’s approval ratings have varied the most with Latinos over any other group since he won re-election in 2012. In December 2012, Obama had 75 percent approval rating among Latinos; his rating is now at 48.

Falcón said that there is no way to determine how Latino voters will respond to the immigration issue on Election Day, but it has become a large part of the conversation, with individuals and organizations promoting conflicting messages.

“Some say that now more than ever Latinos need to prove their political clout by voting,” Falcón said. “Others are as extreme as to say we should hold sit-ins this election, refuse to vote and prove to Democrats how much they need us.”