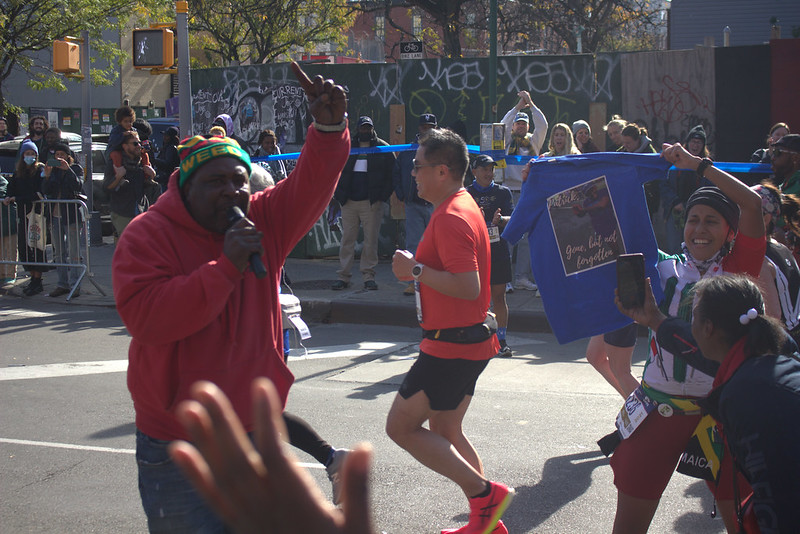 Donald ‘Bobo’ Davis rushes onto Lafayette Avenue to greet Lydia Gonzales. She’s running in remembrance of her husband Patrick, who passed away last week from complications related to Covid-19. Photo by Frank Festa

“We are going to be screaming and shouting for love today,” said Davis, 53.

The DJ booth was situated just past the mile nine marker of the New York City Marathon. Davis believes the marathon is an ideal opportunity to spread positivity.

“We have so much fun, we come out here every year,” said Davis. “There’s so much love in the city, in this neighborhood right here. We’re gonna be out here all day, live performances a little later, celebrating a birthday, a bunch of runners we’re supporting – the energy gets explosive.”

A current resident of Cambria Heights, Queens, Davis was raised in the Lafayette Gardens Housing Project and keeps close ties to the community there, considering it home. Amid the looming specter of Covid-19, Davis’s role in keeping spirits high on the corner of Classon Avenue and Lafayette Avenue has taken on added significance.

“We’ve got Rudy Charles right now at the 13th mile marker that we’re tracking closely, he’s got a good chance. It’s his 6th race, he’s running for the few people he lost due to Covid-19,” said Davis. “Everybody’s running for something.”

Flagged by friend Rahim Deas filming close up shots for a Facebook livestream, Davis worked  his way up and down taped-off Lafayette Avenue. He mingled with onlookers hoisting signs, striking up conversations that leave the other person smiling a little wider, and is pulled away every other moment by someone needing his attention. He’s getting constant updates as to how the runners they’re supporting are progressing. Presently, Lydia Gonzales is of the utmost concern.

“We’re tracking where everybody’s at, but have been waiting to go crazy for Lydia,” said Davis. “Her husband Patrick died just last week from Covid-19. They run this race every year, so we really want to make sure we show up for her today.”

When news came that Gonzales was just two blocks away, Davis hustled back to the tent where the six-foot tall speakers were, letting his friend behind the Macbook know to cut the music when he gave the signal.

As Gonzales appeared in the distance, Davis led the crowd on both sides of the street in chanting her name.

When she arrived in front of Lafayette Gardens, Davis and others dipped under the caution tape and spilled into the street, swarming Gonzales, showering her with love. She lingered for a moment, beaming and soaking in the support before trudging onward, 17 miles to go.