In the dark, misty corner of Central Park, Mario Diurno crossed the finish line of the 2021 NYC Marathon at 10:57 p.m. last night. As he approached the finish line with 15 other people cheering him on behind him, he paused right before the line, savoring his last step, before jumping over it. He was the last runner to cross the finish line this year and successfully completed his first marathon with a time of about 11 hours.

“I feel overwhelmed,” said Diurno. “I feel very grateful for my team. And I couldn’t have done it without all these beautiful people, this is my family right here.”

Diurno crossed the finish line surrounded by about 15 other marathon runners that had already completed the marathon and went back to run the last 10 miles with him and cheer him on. Almost all of them were members of the Release Recovery organization, which helps people struggling with substance abuse and mental health transition back into sober daily living.

“So, they come to us and we teach you how to live in the real world,” said  Diurno. “But we’re there to support you. And we really care about people. People come first always.”

And, that’s exactly what the Release team did with Diurno and his first marathon. He said he was hesitant about running this marathon, but after training with other staff members for 10 weeks before the race, they convinced him to run and made sure he passed the finish line successfully — and that he wasn’t alone. 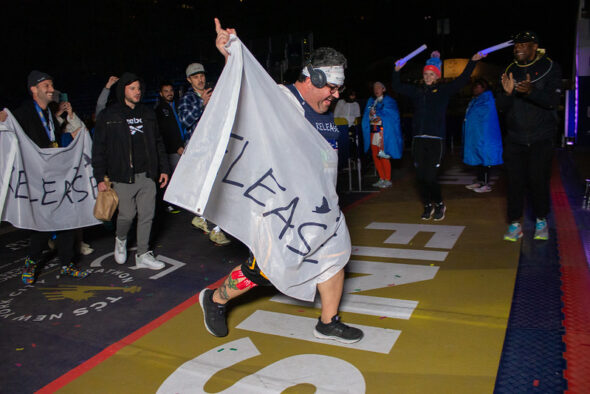 Mario Diurno approaches the finish line after 11 hours of running with race organizers and his teammates cheering him on close by. Photo by Michelle Ng-Reyes

“It felt really good,” said Joe Zappone, the Director of Operations at Release Recovery. “My friend Mario has been struggling training for this marathon. And personally, I had my doubts… So it feels pretty good to see him finish.”

Besides his team at Release, Diurno said he had some extra help from a new friend. He met another runner, a woman named Freddy, who decided to run the rest of the race with him, passing the finish line by his side.

“That lady Freddy is the nicest lady in the world,” Zappone said. “She helped him with the route, or else he might have gotten lost.”

Freddy left shortly after she and Diurno received their medals. However, Diurno got her phone number before she left and was determined to stay in contact with her. He said Freddy was one of the last runners on the course, just like him. Since most of the spectators and street sweepers that would hand out snacks and Gatorade had already left, they decided to see it through together all the way to the finish line.

“I found Freddy, she found me, and that’s all we needed,” said Diurno. “And that’s a big symbol like in recovery, too. I can’t do it alone. You know what I mean? We’re in this together.”