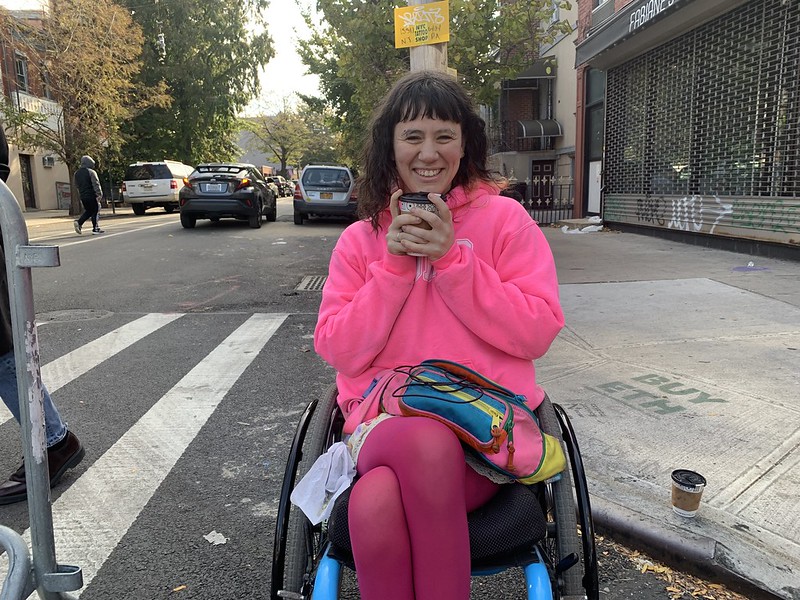 As professional wheelchair racers sped by in North Williamsburg for the return of the New York City Marathon, one Brooklyn native sat in a wheelchair cheering them on in a pink outfit and a  cup of local coffee in her hand

“I always wake up for the wheelchairs because I love to see the disabled athletes do their thing,” Ruby Baron, 22, of Philadelphia, but a Williamsburg native said.

She said the New York City Marathon was the first large event that showed her people with similar disabilities could race on an elite and welcoming stage.

“The only disabled people I ever saw do stuff growing up was in the marathon,” Baron said. “I think the first time I had seen wheelchairs do anything was here.”

In order to watch the wheelchair racers, Baron is at a viewing spot no later than 8:30 a.m.

But this time it felt even more  special as she was excited to see all the runners back after the New York City Marathon took a hiatus last year due to the COVID-19 pandemic.

“It’s my favorite day of the year,” Baron said. “I love the marathon so much.”

Baron has lived in Philadelphia for the past seven years so she makes  the trip annually, always traveling on a Saturday to watch the marathon on Sunday.

Baron’s mother used to host parties when they lived  in North Williamsburg for marathon Sunday.

“Every year we would have a huge party at our house,” Baron said. “So I think it was always a tradition for my family to come watch it so I never want to miss it.”

She  said all the negativity about the city evaporates when the race begins and the city cheers them on.

“I feel like on marathon day everybody’s on the same team,”Baron said.“Everybody is so excited to hang out and have their little coffee together.”

Baron believes that the representation that the marathon gave connected her to the event more, but did not think that was the only thing that impacted her love for the race.

“My connection to [it] was the camaraderie of this neighborhood,” Baron said.“I think I just really love to see everybody be on the same page.”