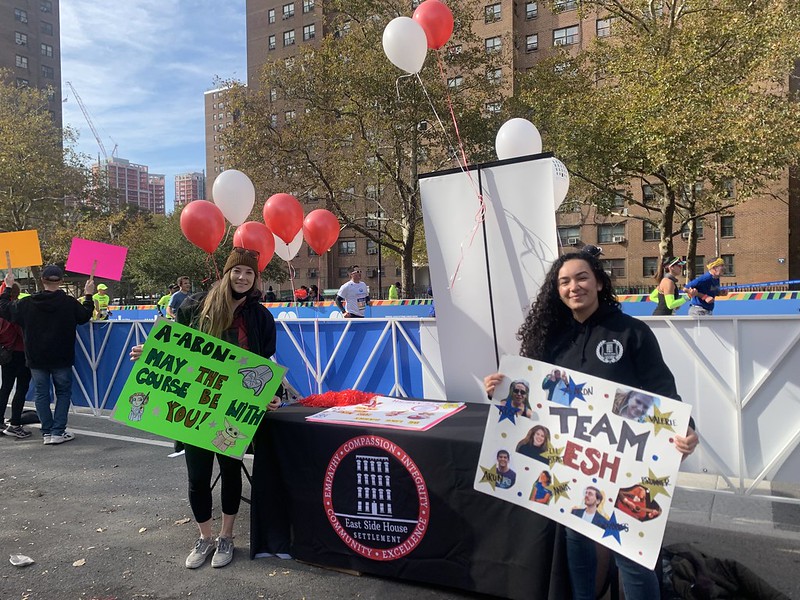 The East Side House Settlement set up a booth to cheer on runners before the turn onto 138th street. Laura Daley is on the left. Photo by Laurel Poole. November 7th, 2021.

The Bronx didn’t hold back in celebrating the 50th New York City Marathon. As runners reached the 20th mile turn onto East 138th street, they were greeted by multiple DJ’s, families with cowbells, and several charities giving out water.

“This is a very inclusive event,” said Laura Daley, the Director of Development at East Side House Settlement, a South Bronx non-profit that works on community education through family development. “Between the people racing in wheelchairs to those from all over the world coming to race here, it’s incredible. The marathon is for everyone.” 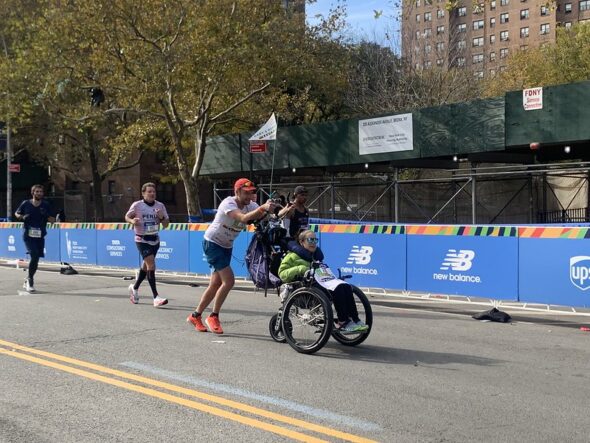 A runner pushes a wheelchair participant in The Bronx and The New York City Marathon. Photo by Laurel Poole. November 7th, 2021.

The Bronx supports this idea, with people of every age and class coming together to dance and cheer on runners they may or may not know.

Set up with a table of balloons and cowbells, Daley was tracking eight runners that she had never met before.

“Go Willie!” cheered Daley. “I don’t know him, but he seemed like he needed that extra little boost.”

This is how the entire city, especially those within the boroughs orient themselves towards the marathon. While running or cheering in the Bronx, a person becomes a member of the community.

Stationed in front of their community center in the South Bronx, Daley and other organizers cheered on their marathon team for the seventh year in a row.

“It’s so fun, everybody gets onboard,” said Daley. “It’s a charity race, so most of these runners are running for a cause that they care about.”

This year, East Side House Settlement has a team of eight people from all over the country who volunteered to run. They have raised more than $40,000 in 2021 for the charity.

The funding will go towards East Side House Settlement’s daycare and afterschool programs, college access programs, and career training. The center has been a proud Bronx establishment since the 1960s.

“It’s a great opportunity for charities to fundraise and meet new people, and to support people who support us,” Daley said.

Since being established in 2006, the New York City Marathon charity program has raised over $350 million for over 1,000 non-profits globally. Runners pass by one of these non-profits in the Bronx. The East Side House Settlement’s buildings are all “within spitting distance” of the marathon, according to Daley.

As the top edge of the marathon map, and a turning point before the finish line stretch, spectators can feel the excitement that runners have rounding the corner onto Morris Avenue.

“Running through all of the boroughs of New York City is pretty iconic,” said Daley. “Especially turning the corner in the Bronx.”