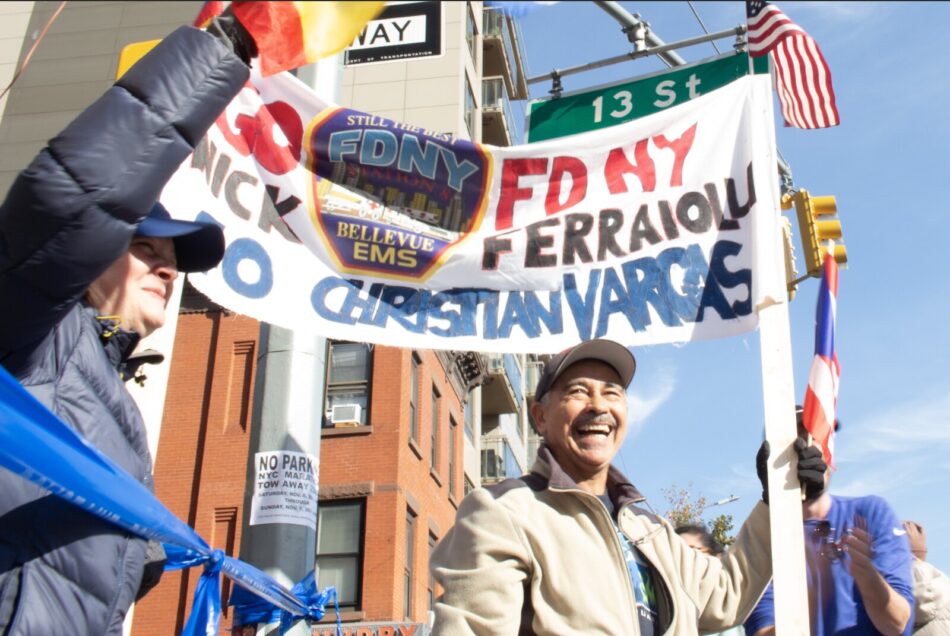 Byron Melo cheers for all of the runners, but especially for Nick and Christian, two fellow paramedics at FDNY EMS Station 8. Photo by Annie Iezzi

Park Slope paramedic Byron Melo took the morning off to cheer for his fellow EMT’s in the NYC Marathon. He grinned, jumped, thumbs-ed up, and high fived for the runners.  He’s been in their place and knows how important sideline-encouragement feels.

“I ran it twice,” said Melo. “The people push you. All the dancing, the groups, the music, that’s what motivates you. When you’re running and you’re in pain and tired and thinking of giving up, the people just lift you. They help you get through.”

Lifting people up is part of Melo’s daily work with Nick Ferraiolli and Christian Vargas, both named in bold on his sign. The three men work together at FDNY EMS Station 8, a Kips Bay location of Bellevue EMS. Melo seemed to cheer so hard that he lost his balance when they passed by, but marathon encouragement isn’t the only way he supports his coworkers. Melo has served for 31 years and mentored countless young folks in the FDNY.

“They are great guys. I want to come out and support them,” he said, smiling toothily.

Melo lives just around the corner from his 13th Street and 4th Ave cheering outpost, but he hails from Bogotá, Colombia. The marathon is a favorite slice of NYC culture for Melo, and whether or not his friends are running, he and his wife come out every year.

“A couple of years it has been very cold,” Melo said, before a toddler in pigtails and a pink puffer wrapped her arms around his legs. “We still come,” he finished, “it’s the community.”

In fact, neighbors surrounded Melo, often roping him into their cheers and throwing their arms around his neck. He joined in chanting “Ben!” over and over for a friend of a friend, and his sign swayed in the bright sky as he turned to watch the runner pass. The community aspect of the NYC marathon is what brings Melo back year after year, to stand out in the sun or bluster.

“We don’t do it for the elite people,” Melo said, looking at his wife. “We like the fact that there are people with struggles in their lives, and they triumph in this. They achieve this.”

Whether they are battling hunger or cancer, says Melo, trouble at work or with the family, folks come out to the marathon to do something. To run the marathon, he implies, is to be good at it, and that is the magic of the day.