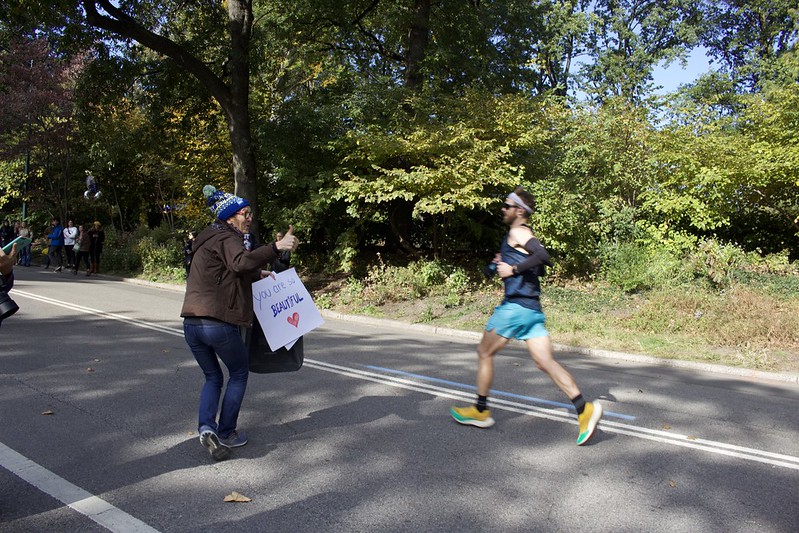 Christine Goubet, a marathon coach, 61, of Hoboken, joins in on running with a participant at mile 24 on the East side of Central Park near 85th Street. Photo by Maggie Geiler

“You are so beautiful” reads Christine Goubet’s sign as she runs alongside the second wave of runners at mile 24 of the New York City Marathon, on the East Side of Central Park at 85th Street, screaming “do not stop! Left, right, left, right” while an NYPD officer ushers her out of the middle of the street.

Goubet, 61, of Hoboken, New Jersey is a marathon coach who has run the marathon three times and been cheering on runners for over 15 years.

“I’m always here supporting, because it’s always beautiful,” said Goubet. “I find people beautiful but when these runners give everything they are even more beautiful. They give their hearts… it’s about what they do for others when they are running.”

Goubet explained that she and her French running group ran for her friend’s daughter who had a passion for running and passed away from brain cancer. Now, Imagine for Margo is a non-profit that exists to fight against childhood cancer.

“Every year we raise money for her,” said Goubet. “Ninety point nine percent of the funds are going to child cancer research. This year we are close to $2 million.”

Goubet turned back to the runners, spotting a man who she didn’t know limping.

“Don’t give up, you’re so close! You’re so beautiful!” said Goubet, sticking with him shoulder to shoulder until he picked up his pace again.

“I concentrate on four or five maximum people per year, and I take them from 5K to half marathon to full marathon,” said Goubet.

Goubet cheered on partners she trained with, telling spectators their names before they ran past so the crowd could join in on chanting for them. She cheered for both friends and strangers like she’d coached them for years, getting into the street and running with them, screaming encouraging words.

“I coach because I want to give something to people,” said Goubet. “I want to help them achieve their dream. For some people who have overcome sickness or injury, it’s so important for them to run again.”

Goubet understands the impact of injury, having started to run only 20 years ago after breaking a vertebra in an equestrian injury as a teenager.

“There’s always going to be something stopping someone,” said Goubet. “Look, there are some people who don’t have any legs here. You can always do something. You can always find a solution.”

Goubet said that pain is inevitable, but not something that should disqualify people from running their race.

“That’s part of life,” she said. “You don’t make an omelet without breaking eggs. That doesn’t mean you can’t do it. All ages are here today, all people can do it.”

Goubet continued cheering as some of the first women raced past, teary eyed.

“I think if people were running more, there would be less war,” said Goubet. “You see the ambiance here today? You hear screaming, you see people cheering, and you believe you can run.”