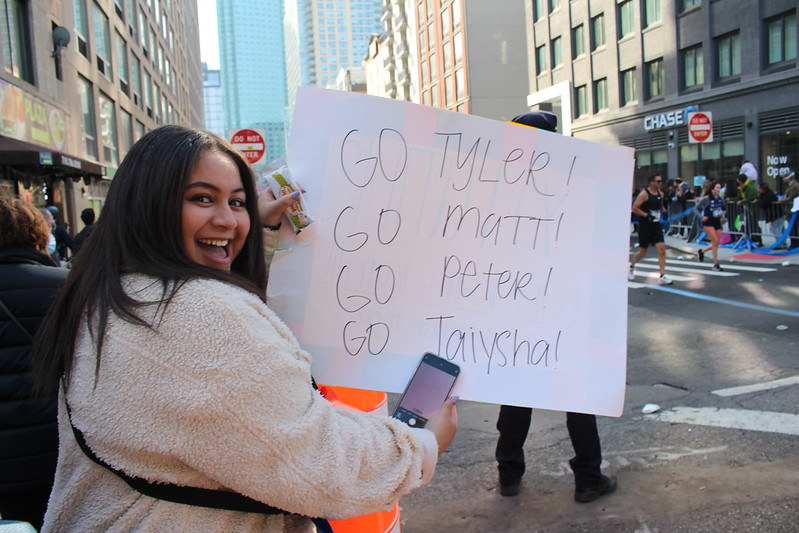 Bridget Betances holds up her posters made just for the “Bachelor” stars who are running in the NYC Marathon today. Photo by Annie Jonas

On a bright and sunny day in Long Island City, Queens, a group of four best friends stood at the entrance onto the Queensboro Bridge to cheer on four  “Bachelor” and “Bachelorette” contestants and a coworker at the midpoint of today’s NYC Marathon.

“You look hot!” “Make this bridge your bitch!” and “We love you!” were just some of the many chants the group screamed at the runners, causing many runners and spectators alike to turn their heads, smile, and thank the group for their energy. A marathoner, Lorenzo Maria Dell’Uva from Italy, even stopped in his tracks to take a picture of the enthusiastic bunch. 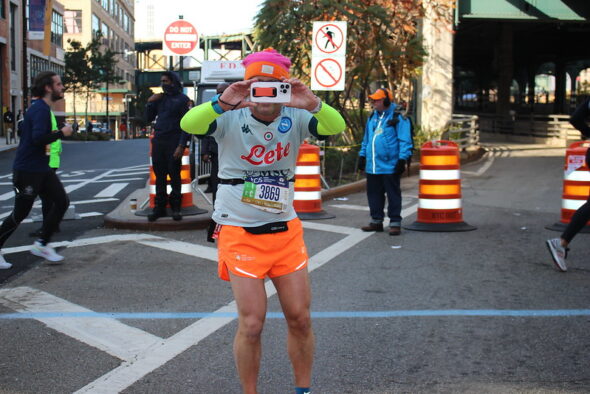 Lorenzo Maria Dell’Uva, a marathoner from Italy, stops before the entrance to the Queensboro Bridge to take a picture of the enthusiastic friend group at the New York City Marathon on Sunday, November 7, 2021.

Betances kept the TCSNYC2021 app open on her phone and frequently checked on the progress of the celebrity runners. As the celebrities approached the bridge, Bridget and her friends could barely contain their excitement. 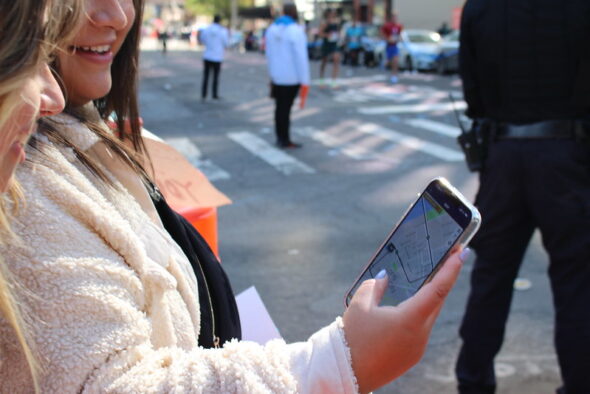 The four celebrities arrived just before 11:30 a.m. Betances and Zachary waved their posters furiously in the air, screaming out their names. In the frenzy, Zachary dropped her poster beyond the police barricade and had to ask an officer to retrieve it for her. Tyler Cameron and Matt James turned to point and smile at the friend group before turning left onto the Queensboro Bridge to continue the marathon. 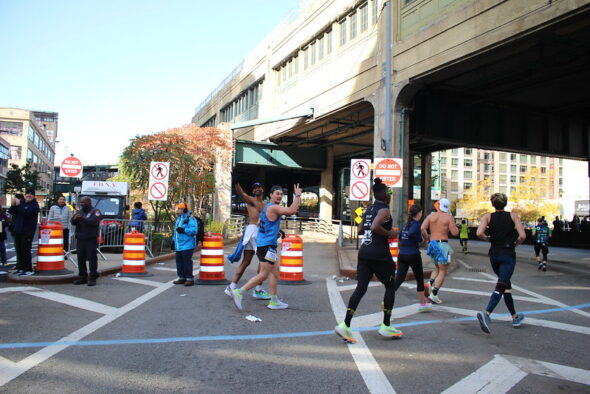 Bachelor celebrities Matt James (white shorts) and Tyler Cameron (blue shirt) smile and point at the friend group as they call out to them, before turning left onto the Queensboro Bridge. Photo by Annie Jonas

Betances hoped Cameron would stop and meet the friend group like he did in 2019, the first time Betances saw the “Bachelor” contestant at the New York City Marathon.

“We made cookies and we were like ‘Tyler! Tyler! Do you want cookies?’ and he came and took a photo with us. It was great, the energy” said Betances.

Urban, on the other hand, was indifferent about the “Bachelor” contestants being at the marathon.

“I don’t personally care,” said Urban, who is waiting for her coworker to arrive. “We have some coworkers running, it’s really exciting. Our friend, Riley Wolfe, is like an amazing runner. He has been running these things for a long time.”

The friend group moved to Long Island City in Queens, from Indiana, where they went to college together. They said they live just across the street from the bridge and enjoy being cheerleaders to the marathoners.

“We live in Long Island City, so it’s nice to cheer on from our community,” said Betances.