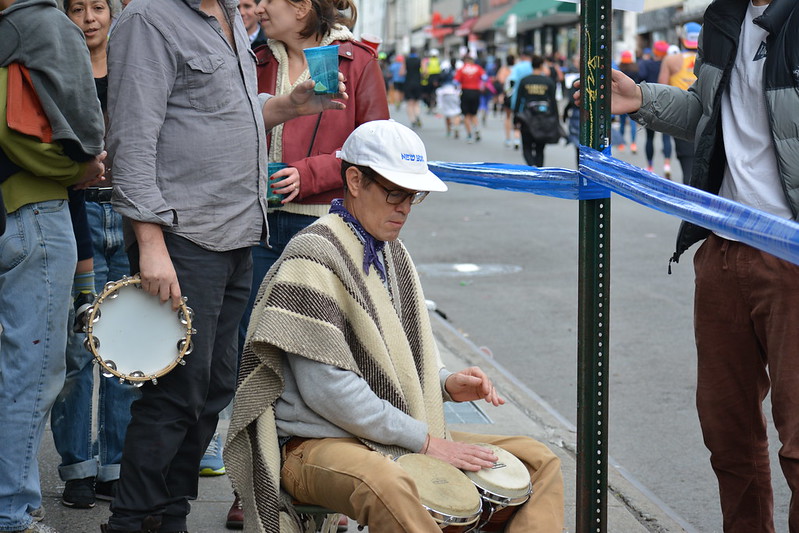 Torres, 51,  has lived in the neighborhood for about 20 years. Before the bongo  he used to enjoy going out with his best friends to get Bloody Mary’s and ringing a bell during the morning of the marathon. But after a few years his fascination with ringing a bell was not the sound he wanted the runners to hear.

“I’m taking bongo lessons now, so I’m just trying to pump up the crowd with them,” he said.

Music is a huge part of the Green Point marathon spectator community. In every block is  a drummer motivating runners at the edge of a sidewalk.

“Well, I think music and food is the heart of the city,” Torres said, “So any chance people could get to bring their music out and to share with the public, whether they’re deejaying or live bands, it’s a great thing.”

Torres starting striking his bongos at  10 a.m.  with other neighborhood musicians, bringing back that rock star spirit that he said was lost during the pandemic.

“It’s bonkers playing. I was with the jazz band earlier that was cool,” he said. “They didn’t know me but wasn’t uninvited, as long your respectful and like just play in tune with them as much as possible, it’s great”

When the runners flew bye the sound of the bongos made many of them  lift their hands in a fist and smile at Torres.

“It’s good to see everyone out, like we gotta be able to enjoy our lives,” he said. “So maybe it just means we just do more things outdoors without having distress, cause this virus isn’t going away, but we can make the adjustments.”

After being stuck at home for over a year Torres believes it’s time to take the city back and take advantage of the fact that the NYC Marathon is his backyard. He hopes everyone in his community is taking the vaccine seriously so musicians can begin playing at indoor venues during the winter.

“The more music we can bring the better. We need the future generations to keep us all moving forward,”said Torres.“We need you guys, your energy, your positive energies to everyone’s staying upbeat, we’re just trying to address some of the problems we have in this world.”