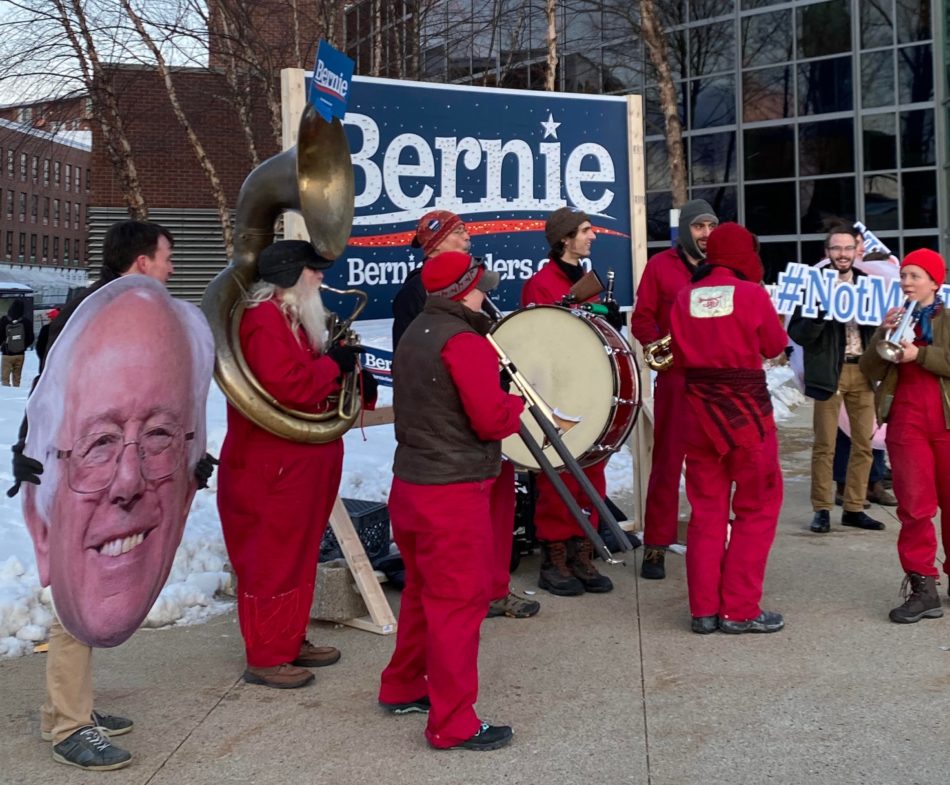 Sen. Bernie Sanders supporters gather outside the SNHU arena in Manchester on Saturday night. Sanders and the other Democratic candidates spoke at the McIntrye- Shaheen 100 Club Fundraiser at the arena. Photo by Serafina Smith

“No matter who wins the Democratic nomination, we are going to come together to defeat the most dangerous president in the history of this country,” said Senator Bernie Sanders at the McIntyre-Shaheen 100 Club Dinner in Manchester, New Hampshire on Saturday night.

Just three days before the New Hampshire primary, the Vermont Senator spoke to the crowd from the blue-carpeted stage at the SNHU Arena, rotating slightly from his hunched position behind the plexiglass podium to wave to the designated support section behind him.  The crowd, including the bleachers full of his fans waving magenta light-up “Bernie” signs, cheered in the cavernous arena.

The proclamation has been a standard part of Sanders’ stump speech on the 2020 campaign trail. But to some Democrats, especially those who actively support other candidates, it’s hardly a given that his supporters will vote for the party’s candidate if it’s not Bernie. And his supporters, in turn, are irritated at the stereotype of Bernie Bros, a group of mostly white men known for their abrasive behavior online. They see it as a way to underplay the campaign’s diversity.

“The Bernie bros stereotype is specifically designed to suppress people of color and LGBT voices,” said Isaiah Tobias Lee at a Sanders debate watch party in Manchester on Friday night.

Lee is a 19-year-old trans man who says that trans rights and rights for indigenous people are his top concerns in choosing a candidate. He believes the Sanders campaign will support those rights, and the rights of all people of color, more than anyone else in the race.

Lee is currently taking a semester off from Rhode Island College to canvass for Sanders, but is originally from Kentucky. In addition to the Sanders campaign he is involved with the Sunrise Movement, a youth climate action advocacy group. When asked how he relates to friends and family who have chosen to support other candidates in the 2020 presidential race, he said, “I mostly distance myself from every friend who hasn’t decided to vote for Bernie.”

New Hampshire voter Jonah Manning, a 28-year-old cook in Portsmouth, echoed Lee’s sentiments about the diversity of the campaign. “Even if you do create a stereotype of Bernie bros that is a pejorative,” he said, “Obviously the frame is hollow because he has the most diverse supporters.”

In 2016 Sanders struggled to match Hillary’s support in nonwhite communities. But this time around, Sanders’ movement is much more diverse, both racially and in terms of other metrics like gender and education level. This is likely due to new talking points on systemic racial injustice in addition to his standard mantra on economic inequality.

Polling data from the Economist suggest that while Vice President Biden leads with Black voters, Sanders leads the Hispanic vote in all education and gender categories. He is also polling ahead of any other candidate with white women under the age of 30 and Hispanic women of all ages. In most other identity categories, he and Senator Elizabeth Warren are neck-and-neck, except for white males under 45, where Sanders again is at an advantage.

But in a state like New Hampshire, where the nonwhite vote makes up a very small percentage of the electorate (the state’s population is 93% white) — the question of “Bernie Bro” cyberbullying remains. And although the candidate has asked his followers to “engage respectfully,” the loyal haven’t always listened.

When controversy surfaced in January over whether Sanders had made a comment to Warren about a female candidate’s electability, #RefundWarren trended on Twitter the next day, appearing alongside screenshots of donors asking for a return of their contributions to the Massachusetts Senator’s campaign. Sanders supporters lashed out and called the candidate a liar, terrorizing her vocal online supporters. Almost every tweet from Warren’s campaign still elicits a flood of snake emojis and hashtags like #WarrenIsASnake.

Sanders supporters on Twitter also have several hashtags to attack other candidates, including many targeted at Mayor Pete Buttigeig – #WallStreetPete, #MayorCheat, and the rat emoji,  apparently a mean-spirited attack on the South Bend mayor’s appearance.

Ethan Manning, Jonah’s brother and a student at the University of New Hampshire, attributes the online actions of his fellow Sanders fans to the passion of the campaign.  “Because of all the activity and energy, you’re going to see people saying stupid shit and tweeting rat emojis and snake emojis,” he said.

“That stuff is just like peripheral,” Manning added. “It’s ancillary to the fact that this is a political thing, and these policies are affecting peoples’ lives.”

For the most part, Sanders supporters on the streets of Manchester seemed not to reflect the movement’s online toxicity.

“They’re mostly harmless,” said Emily, a Warren supporter who preferred not to use her last name. The question on her mind, however, was if Sanders’ coalition would turn out to vote for another Democratic nominee in November. “My hope is that, just like how we would vote for any winner of the primary, that they would do the same, and keep that same kind of energy for whoever the final candidate is,” she said.

Some Sanders supporters indicated that they would, although with varying degrees of hesitation. Jonah Manning said he would vote for anyone against Trump in November, but added that the question, “doesn’t address the despair I would feel voting for another person.”

His brother Ethan would too, unless there was an extenuating circumstance. “If they murder Bernie at the convention and there’s like some demonic ritual that happens, no,” he said with a laugh. “But other than that, I probably will.”

Serafina Smith is a graduate student in the Magazine and Digital Storytelling concentration.