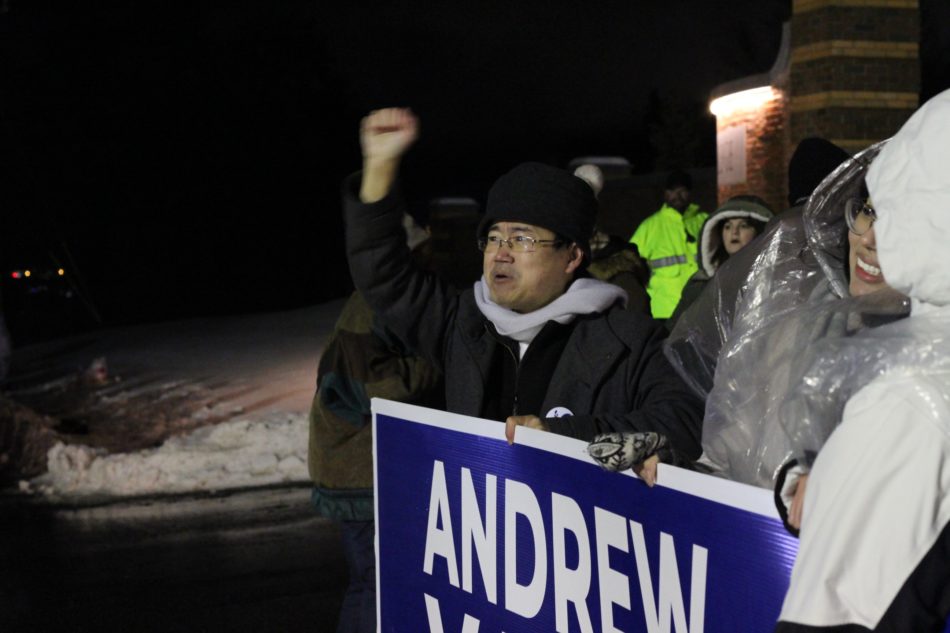 Jeffrey Zhang at a rally at Saint Anselm College in Manchester. Zhang is a first-generation immigrant from Shanghai, China who supports Andrew Yang. Photo by Hoa P. Nguyen

Saturday before the New Hampshire primary, the temperature in Manchester dropped below 10 degrees. The muddy uphill trail leading to Saint Anselm College’s main entrance turned icy. Dozens of diehard campaigners shivered in the blustery weather. Some chanted and waved yellow and blue Pete 2020 signs. Others cheerfully flaunted their blue and green Amy for America banners. A smaller group held on tight to their blue and red Biden President flags. Despite the violent gusts of wind, a man with a big smile on his face ran back and forth holding a human-sized 1000-dollar bill with Andrew Yang’s face on it.

Among the enthusiastic campaign followers braving the cold were immigrants for whom American elections hold special appeal.

Jeffrey Zhang was shouting at the top of his lungs at the far end of a cascade of Yang supporters while carrying his wife’s checkered purse. “In 2016, you know, I was a Trump supporter,’ said the first-generation immigrant from Shanghai, China, who came to the U.S. with his parents in 1987. “But he doesn’t care about the working poor. He doesn’t care about colleges with high tuition. He only helps the super super-rich corporation to become richer and richer.”

Zhang, who works at a nursing home in Cambridge, Massachusetts, drove to Manchester with his wife just to voice his support for Andrew Yang. “Yang is the only person among these candidates who understands 21st century technology,” Zhang argued. “Right now, 60 percent of people have less than $500 in their bank. Seventy percent of American people don’t have $2,000 to repair cars. Donald Trump did not cut the cake fairly.” Zhang added that he voted for Trump four years ago because as a proud Christian, he had hoped that Trump would build a Third Temple in Israel.

Mohammad Mustak has lived in Nashua since 2013. Originally from Burma, Mustak is a Rohingya who lived in Malaysia for 17 years as a refugee before resettling to the U.S. thanks to an arrangement by the United Nations High Commissioner for Refugees.

Back in Burma, Mustak was first able to enroll in university because his father worked for the government. Towards his graduation, the administration found out he was Rohingya and refused to give him a certificate. He was then accused of making fake documents to go to college and was sent to jail for three months. To escape the genocide of Rohingya people in Burma, Mustak fled from country to country, including a month living in the jungle of Thailand.

In addition to being a part-time interpreter who speaks Burmese and Malay, Mustak works as a case manager at the non-profit Building Community in New Hampshire, which helps immigrants and refugees get access to healthcare, employment and education. He also founded the Rohingya Society of Greater Nashua and currently serves as the executive director.

Mustak became a citizen two years ago and this year will be the first time he gets to vote in the elections. “I already endorsed Bernie, like publicly,” he said. Mustak met the Vermont Senator in person at three events last year. “Bernie looks like he is my guy because he’s not a rich guy,” Mustak continued. “He has a long history of fighting for everybody.” 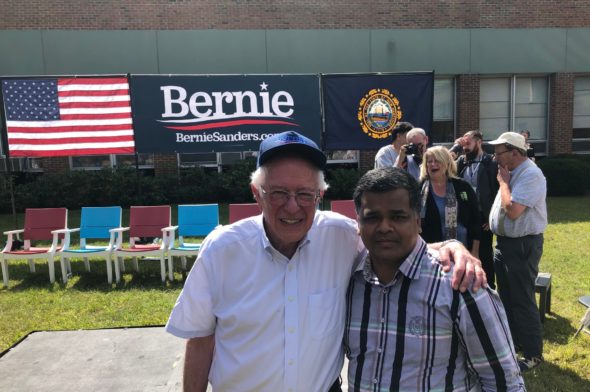 Mustak said he talked to Senator Sanders about the genocide in Burma as well as international policy at large. “Almost three years we don’t have our community resettling to the U.S.,” he said. “So it looks like nobody is coming.” He added that there’s a lot the U.S. government can do to live up to its reputation as a welcoming place for refugees.

Sandra Pratt, a friend of Mustak and an immigrant from Curitiba, Brazil, who is undecided, says she wouldn’t support a candidate who wants to welcome all refugees and immigrants. “I don’t think that would work because we have a lot to do for the people that are already here,” she said.

Pratt came to the U.S. 20 years ago with the initial goal of learning English before going back to Brazil to finish her master’s degree in gerontology. She then married an American man and decided to stay. She left her husband after five years when he became verbally and physically abusive, and remarried in 2011. Fluent in English, Spanish and Portuguese, she is now a trilingual service coordinator for individuals with developmental disabilities at Gateways Community Services. 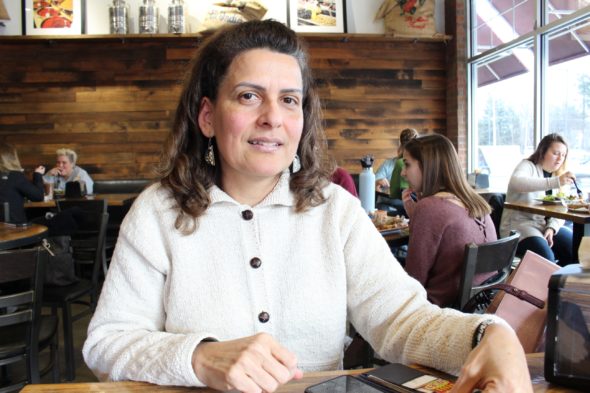 Sandra Pratt, an immigrant from Brazil  is an undecided voter. Photo by Hoa P. Nguyen

Pratt made clear that she didn’t dislike immigrants — she is an immigrant herself. “But too much is too much and too much freedom is not good,” she said. Pratt is, however, an advocate for immigrants’ rights to education and employment opportunities. She believes that immigrants should be able to get social security numbers and tax IDs so that they can work and pay taxes. Pratt also cares about access to reliable transportation, which is one of the biggest issues in areas like Nashua, where some aren’t able to drive and without a public transportation system, it’s difficult for them to get to work, to school and wherever they want to go.

Pratt is also concerned about the discrimination facing immigrants, particularly young children at school. “I feel like the kids are discriminated against because they’re not legal in this country, so they don’t get all the support that they need at the school,” Pratt said.

As Democratic candidates convened in New Hampshire to round up their voters ahead of the primary, Pratt is still taking her time to consider. “I see flashes here flashes there, things here and there, but I’m not sure yet,” she said.

Hoa P. Nguyen is a graduate student in the Magazine and Digital Storytelling concentration.