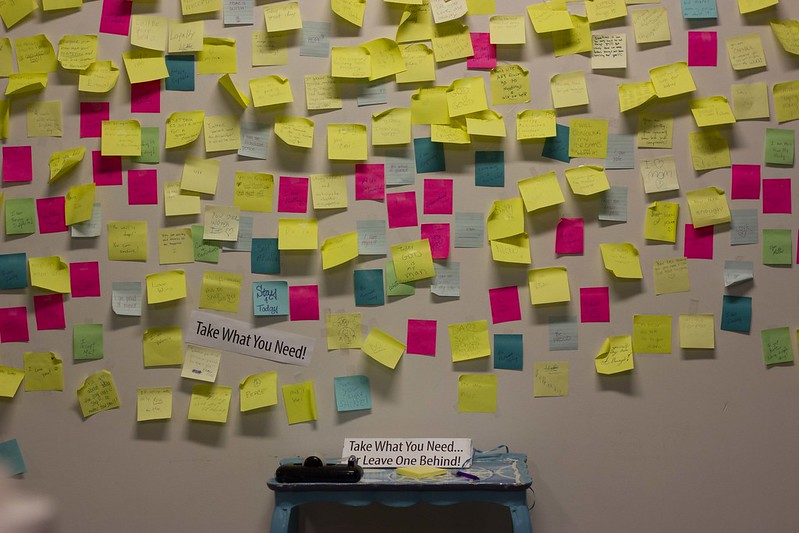 Hope for NH Recovery is a community center in Manchester, New Hampshire, for people recovering from addiction. One of the walls is covered by post its with insirational quotes. Photo by Catarina Lamelas Moura

On an ordinary Friday afternoon Elizabeth Warren might not have walked into Restoration Cafe, a small shop in Manchester. But with the New Hampshire Democratic Primary four short days away, it was no typical Friday.

New Hampshire native Timothy McMahan King was there and approached the Massachusetts senator. He handed her a copy of his book, “Addiction Nation”, published in 2019, which details the story of his past opioid abuse.

“Elizabeth Warren has a great plan [for solving the opioid crisis],” King said. “Love it. On paper.”

But in reality, he has serious doubts about whether it could be put in place. In fact, as an undecided Democratic voter, from one of the top states most affected by the opioid crisis, King believes that every single front runner in the primary election has laid out effective proposals to deal with one of the most serious health crisis plaguing the country.

“But they aren’t campaigning on it like they need to,” King said. 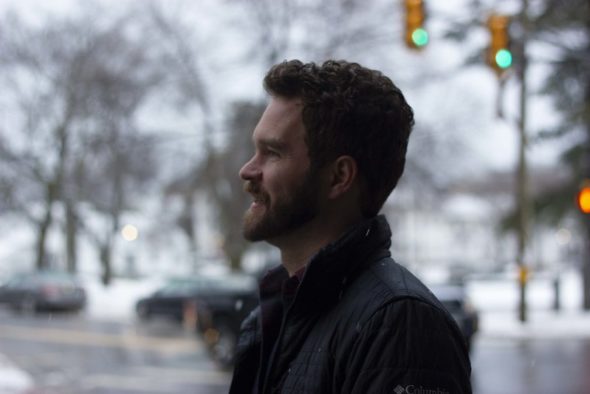 While the opioid crisis typically doesn’t make it into the top ten issues in democratic candidate’s stump speeches, it is currently listed in the top five in the White House’s official website, the author pointed out.

“There’s something that they’re looking at that the Democrats aren’t,” he said. “You call up a normal person and you ask them what their top issues are, drug policy is not going to be up there. But it’s not a policy issue. It’s a narrative issue. And Trump knows how to win on narrative.”

A total of 67,367  people died from drug overdoses in 2018, according to the Center For Disease Control And Prevention. That same year, New Hampshire had an age-adjusted rate of 35.8 deaths per 100,000 persons, close to double the national average of 20.7.

That year’s numbers also show the first decrease in drug overdose in the past 28 years (4.1% decline from 2017) — a fact Trump took credit for in his latest State of the Union Address.

“So Trump comes to New Hampshire and he taps into that,” King said. “But he’s not there to talk about the policy. He’s there to have a very deep visceral connection with the ways that people have lost family.”

The author argued that the only candidate who has been able to appeal to people on this level has been Andrew Yang.

“He goes to people and he’s like ‘what’s different in your town,’” King said. “But none of the other Democrats are integrating it that way, because it doesn’t show up as the policy issue that people care about. Where Trump’s campaign has identified ‘oh, this is a story we can tell that justifies our other policies.’”

At the recent McIntyre-Shaheen 100 Club Dinner,  which gives the Democratic candidates a platform to speak to funders and supporters, Lisa Klaud, 42, from Hooksett, New Hampshire, still hadn’t decided on who to vote for in the upcoming primary, but said she was leaning towards Andrew Yang.

“I think he has a tremendous amount of energy and intuition in terms of reading what the American public is experiencing,” she said. “He’s the only candidate that really understands what’s going on if you’re dealing with extreme poverty or your middle class. New Hampshire has its set of very specific challenges, and he’s been able to speak to all of them.”

Klaud also praised Yang’s Freedom dividend as something that would greatly impact the lives of people impacted by the opioid crisis.

“[It] would make a huge difference for anybody who’s raising children who are their children’s children, which in the state of New Hampshire happens a lot,” Laud said. “The foster care system doesn’t have sufficient beds for all of the people who are impacted. So that would really help struggling families to be able to make due when they’re doing parenting the second time around.”

Some Democratic voters who attended events over the weekend leading up to the primary looked at the opioid crisis as part of a larger issue. Cara Flynn, 19, a student currently living in Boston, has seen many people around her impacted by this problem.

“It’s more of a human rights issue,” Flynn said. “I believe that without Medicare for all, or without a universal health care plan, that it’s just going to keep happening. People are going to be taken advantage of and that includes not having access to health products that they need. And because of that, they turned to something more accessible, like drugs, alcohol.” 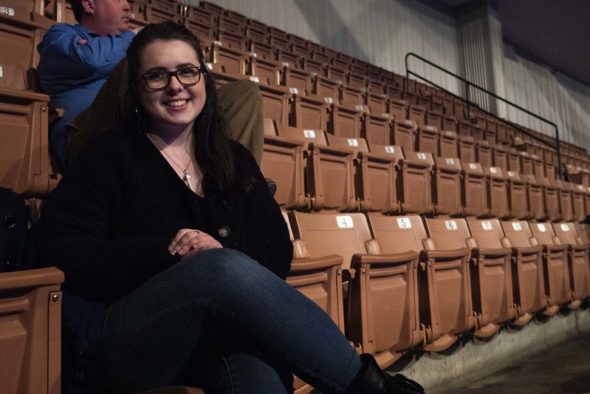 Samantha Spiers, 29, attended the McIntyre-Shaheen 100 Club Dinner, while still undecided on who to vote for in the primaries. Photo by Catarina Lamelas Moura

Samantha Spiers, 29, of New Hampshire, is leaning towards voting for Bernie Sanders. Although “it’s hard to meet someone who hasn’t been affected” by the opioid crisis, Spiers said that everyone is divided on how to address it.

“People still don’t even see substance abuse as a mental health issue and as a health issue,” she said, stressing the importance of universal health care.

On the moderate side, John McSheffrey, 52, from Newbury, New Hampshire, wants to see big government hold big pharma accountable — a position he has seen on opposite sides of the political spectrum, both from Bernie Sanders and Donald Trump’s republican challenger Bill Weld.

Whoever is elected has to be able to bring people together, he said.

Hope for NH Recovery, in Manchester, is a community center where people with an addiction can find safe haven. Keith Howard, 61, its executive director is looking for a politician who can address the challenges of living in the 21st century. 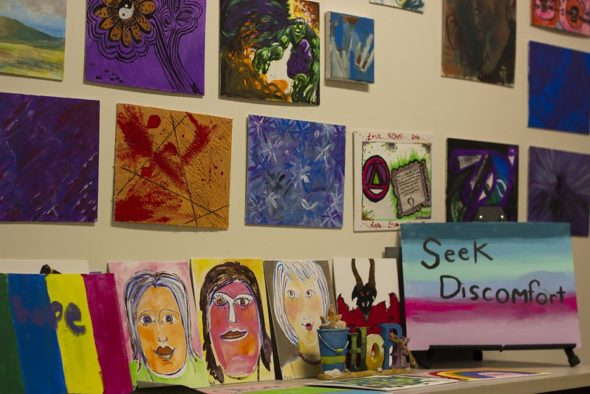 Hope for NH Recovery is a community center in Manchester, New Hampshire, for people recovering from addiction. Some of the art made there is displayed along the halls. Photo by Catarina Lamelas Moura

“As I am making my decision, It’s very unlikely that a politician’s position on increasing funding for opioid treatment or recovery is going to play much into my decision,” Howard said. “I think that politicians can have a much more direct hand in then fighting what I see as being an existential, philosophical issue of the emptiness of modern life. I don’t think that there’s a Senate bill that is going to bring meaning to people who need drugs just to get up the courage to live.”

As someone who has been in recovery for 12 years, Howard’s views stem from his beliefs on the underlying cause of addiction. 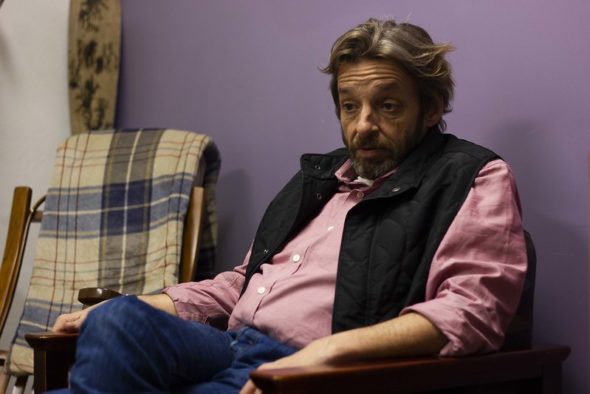 Keith Howard, 61, is the executive director of Hope for NH Recovery. He has been in recovery himself for about 12 years. Photo by Catarina Lamelas Moura

“I think that addiction is caused by alienation from humanity and alienation from the world,” he said. “If a person is alienated drugs make you feel better. If you are having your human needs met, then you don’t need drugs as much.”

Carlos Zemban, 57, a recovering addict,  spends a big part of his week attending meetings and hanging out at Hope for NH Recovery. About 30 years ago he left Santa Catarina, Brazil, for New Hampshire and hasn’t been back since. In 2016, Zemban was one of the 46,5% people in New Hampshire who voted for Trump. Hilary Clinton won the state by a very slim margin. 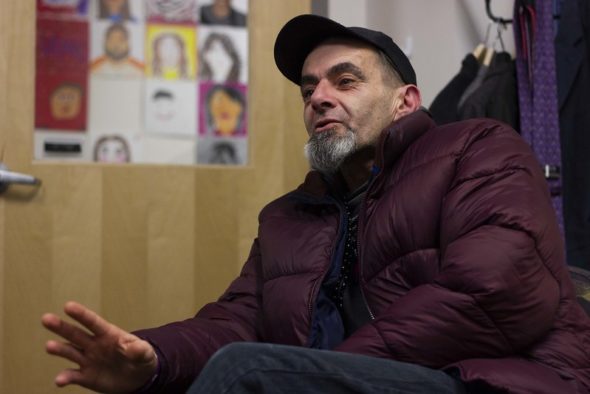 Carlos Zemban, 57, is recovering from substance abuse and spends a big part of his week attending meetings and hanging out at Hope for NH Recovery. Photo by Catarina Lamelas Moura

Zemban, is currently homeless and looking for a job, having been laid off from his previous position in construction three months ago. As a single parent to a 12 year old daughter, he sees Trump as the candidate who can better address his concerns.

“Being a single father, looking for assistance is a big deal. Every time you go to get assistance or anything, it’s like a barrier they have. That’s a policy that has to be changed around,” he said. “This year I have to find a way to advocate for a single father, with a kid, to find a place to live. Because a woman with a kid can get anywhere she wants to, but a guy with a kid, it’s very hard to get help. It’s a lot of barriers.”

Having used everything from alcohol, to cocaine, prescription pills and heroin throughout most of his life, Zemban has been in recovery since September of 2018. His substance abuse started back in Brazil, at the young age of 11.

“When I left Brazil I thought I could come here and start fresh,” he said. “But I ended up going the same way really.”

Now he said he is turning his life around.

“I can see myself sitting on the porch, my own house. You know, it happened before so why not?,” he said.

For the moment, he is focused on staying clean. And come November he will once again cast his vote for President Trump.