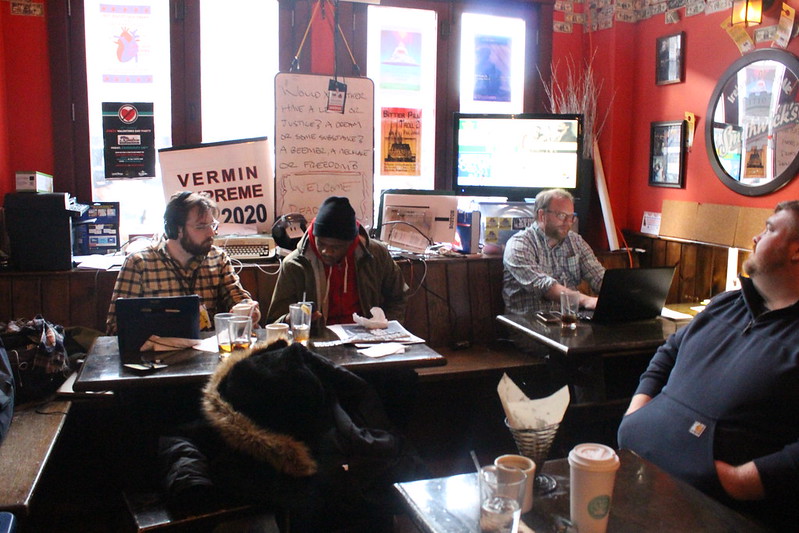 During a painfully cold February in Manchester, New Hampshire, journalists from across the country have adopted an unlikely workplace: a dive bar in the heart of the city’s downtown. The pop-up newsroom is not immediately recognizable when you enter the Shaskeen Pub – a large crowd of locals and visitors alike drink and socialize as they snack on fried cheese curds or street corn fries. But in one corner of the bar, booming laughs give way to people with headphones hunched over their laptop and scribbling away on notepads while a small TV screen shows the latest news on the election.

Right down the street from Manchester’s “Primary Radio Row,” where large media and news outlets gather to cover campaigning just days before the New Hampshire democratic primary on Tuesday, the bar is a sanctuary for independent journalists, freelancers and smaller news organizations to work on their election-based projects. The idea came to Chris Faraone, the founder of the Boston Institute for Nonprofit Journalism (BINJ) and editor of Boston’s alt weekly, DigBoston, after noticing that his writers didn’t have a real workspace for covering major stories in other parts of the country. With New Hampshire just an hour away from their headquarters in Boston, BINJ founded a makeshift newsroom for the 2016 primary in Manchester. After the success of that year, Faraone was adamant to put the event together again during the 2020 election year.

“Listen, it’s not exactly one of the biggest problems facing the nation but for journalists, it’s a pain in the ass to be here,” said Faraone, who, for the most part, stays at the bar to edit his writers’ pieces as they bring them in. “I’ve been reporting in Manchester every four years since 2004 and I’m curled up in a coffee shop or in a corner on the floor. And for me, that camaraderie is important and, in practice, it’s proven to be important.”

Indeed, Erick Trickey, a journalist in Boston for the last five years, comes to the Shaskeen Pub as a way to feel supported while he works. “It’s great to be working with BINJ. Chris is a great guy, he always gives a high five or a handshake when you come in,” Trickey notes. “I’ve had a couple of conversations with people who are friendly and excited to be covering the campaign. The camaraderie here is cool.”

Faraone is also happy to share resources with other reporters who need them. One major news outlet, for instance, borrowed one of Faraone’s photographers for a last minute story. “This is as much of a working newsroom as you can see anywhere else. Plus,” he adds, “It doesn’t hurt to have food and beer to keep you warm in New Hampshire.”

But why the Shaskeen Pub? Already a popular name in the small bar scene of New Hampshire, the Shaskeen’s owner, Tommy McCarthy, has been friends with one of Faraone’s writers for years. BINJ soon formed a sponsored partnership with the bar and Shaskeen’s staff began scheduling a variety of events during the primary to entertain bar-goers and lift the spirits of stressed journalists.

New York City Hip-hop duo Dead Prez performed a live show on Friday night at the back quarters of the bar. On Sunday night, a comedy show mimicking a debate between Bernie Sanders and Donald Trump was presented. A pub band, composed of flautists, violinists and a banjo player, perform a lengthy Irish jig at a corner table every week. Even Vermin Supreme, a perennial presidential candidate who wears a large boot on his head and supports “time travel and zombie preparedness” hangs around the bar and interacts with his surprisingly large following. In the midst of the serious and often tense atmosphere that surrounds presidential elections, the Shaskeen Pub serves as a temporary escape from the madness.

As the presidential election inches closer, it is no surprise that political tensions run high between Republican and Democratic supporters, especially in early primary states like Iowa and New Hampshire. BINJ and the Shaskeen Pub make it possible to coexist, allowing everyone to feel welcome no matter their political preferences. BINJ reporters were able to speak to Republican presidential candidate Matt Matern, who stopped by the Shaskeen Pub while in the area.

“Everybody should get the same information, the same ideas, without tailoring information to fulfill whatever their biases are,” says Loftus. “We try to make it very neutral and allow people to approach us and feel comfortable when they do.”

Mili Godio is a graduate student in the Magazine and Digital Storytelling concentration.