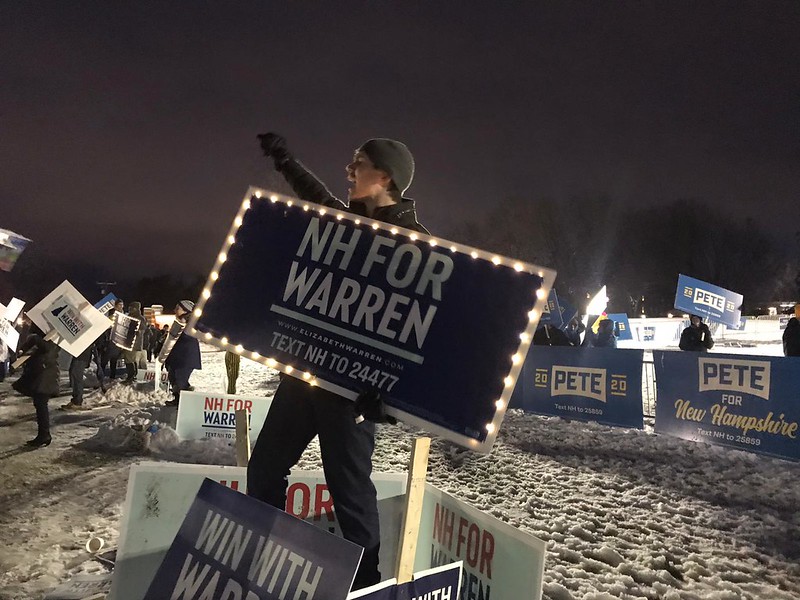 A Warren supporter campaigns outside of St. Anselm College in Manchester, New Hampshire.

Vanessa used to love burritos, but not when she started working at Chipotle. The high school teenager who resides in Nashua, New Hampshire, is frustrated about the fact that every hour of her hard work at the fast-food chain adds only puts $11 in  her pocket.

Felipe is not that lucky. Living in a small town that borders New Hampshire, he gets up at 7 am every Saturday to catch a van that takes him to Manchester. The 18-year-old will then work at a food stand in the Southern   New Hampshire University Arena for 10 hours, and head back home in the midnight with $100 in hand.

Both Vanessa and Felipe are looking forward to a higher minimum wage being implemented in New Hampshire. The current rate of $7.25 an hour is the lowest in New England but the cost of living is among the highest in the nation.    These teens are not  alone.

In May 2019, a survey  by Public Policy Polling showed that more than 60% of New Hampshire residents strongly supported raising the minimum wage to $12 by 2022. It would affect more than 150,000 employees who make up 24% of New Hampshire’s labor force, according to a research by the Economic Policy Institute.

The Democratic Presidential candidates want to push it further. They  want to raise the minimum wage to $15 an hour.  Of the seven candidates who qualified for the February debates in the 2020 election cycle, five support a federal minimum wage of $15, including Pete Buttigieg and Bernie Sanders, the two forerunners in the Iowa caucus. A $15 minimum wage would benefit even more New Hampshire workers – some  225,000 people in New Hampshire, representing 36% of the state’s labor force, according to a report by the National Employment Project.

Calls to double the minimum wage in New Hampshire have garnered  tremendous support from local unions. SEA/SEIU Local 1984, a New Hampshire branch of the Service Employees International Union, announced on January 12 that it would endorse Bernie Sanders for the Democratic presidential nomination. The endorsement decision distanced the local branch from its national affiliate, which has so far remained neutral in the presidential race.

Yet economists do not think minimum wage alone would do much to New Hampshire’s economy, which already has one of the lowest poverty rates in the nation. A classical economic theory suggests that a higher minimum wage could lead to a higher unemployment rate as companies lay off workers when they cannot afford to pay higher wages,  according to Guido Menzio, professor of labor economics at New York University.

The theory does seem to be on display in New Hampshire where the state’s $7.25 minimum wage law is accompanied by a 2.6% unemployment rate, the third-lowest in the nation.

Menzio also points out that an increase in the minimum wage might improve the efficiency of the economy by weeding out unproductive employers. But, he said, it does not necessarily improve workers’ living conditions.

“Workers may be paid $15 rather than $10 an hour but required to have their own transportation, work longer effective hours, or work more intense hours,” said Menzio.

C.J., who used to work as a pastry chef in New Hampshire for 20 years, agreed with Menzio on the point that a simple increase in wage did not make his life easier. “I used to live on minimum wage for years,” said C.J. who spoke anonymously because he did not want to be seen being critical of his employer.  “when I got promoted to the management level, I started working 60, 70, or even 80 hours per week. If you divide the pay by the hours I work, I was paid even less than the minimum wage.”

What C.J. really likes about his  current job is that his employer provides him with a solid benefit package. “Now I have insurance, and can take a paid-leave — these are more important factors than a simple rise in wage,” said C.J.

Ethan, a first-year student at Manchester Community College who works 1o hours at an  ice-cream stand and 20 hours as a construction worker, says he gets paid $300 per week and needs more money. “But I don’t think $15 would do much to my life,” said Ethan, “I think the inflation will ultimately offset such little increase in my hourly wage.”

Karen Conway, economist at the University of New Hampshire, is a strong opponent of a $15 minimum wage for the state. “The cost of living varies dramatically across the country and even within New Hampshire,” said Conway. “The northern part of the state is more rural and hence has more small firms, which are more likely to lay off people if the minimum wage rises.”

Bruce Sacerdote, a labor economist at Dartmouth College, thinks that the labor market in New Hampshire is strong enough to afford some layoff. “I am in favor [of a $15 minimum wage] given recent studies on the minimum wage law that suggest that this does put a floor on wages for low-income folks, and the reductions in employment are not severe,” said Sacerdote.