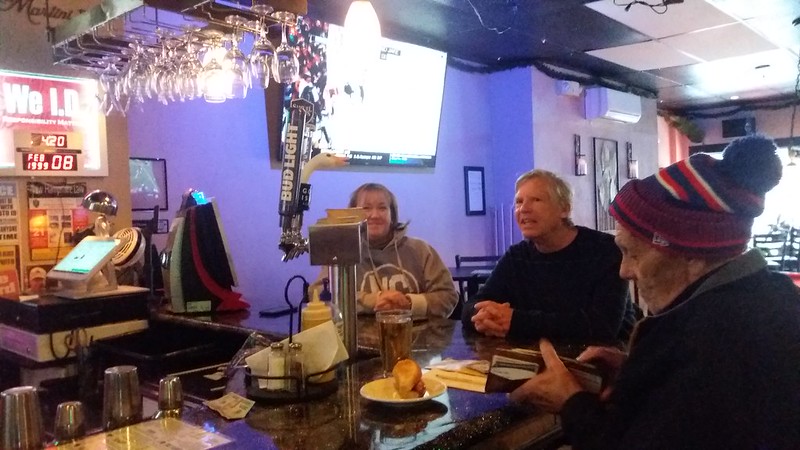 Customers gather in the Doogie’s Bar and Grill in Manchester, Photo by Vinamrata Chaturvedi

Ever since the former mayor of the South Bend, Indiana Pete Buttigieg announced his candidacy for president a little more than a year ago, Breezeway Pub, a gay bar and restaurant in Manchester, New Hampshire, has become even more a place for political debate.

Naturally, this has been good for business. Last year “was the best year ever,” said owner Steve Stevens on a one recent evening in February, four days before the New Hampshire primary, as he checked to make sure the kitchen was ready to serve the usual bar fare like burgers, grilled cheese sandwiches and chicken wings.

While his bar may have benefited financially from the rise of Buttigieg, Stevens, 59, himself a member of the LGBTQ community supports Elizabeth Warren. But aside from selecting a candidate, he said the number one issue for owners of gay bars in New Hampshire is security. The shooting in a gay nightclub in Orlando that killed 49 people in 2016 and more recent attacks on LGBTQ people in recent years led him to increase security.

Stevens is not the only gay bar owner in Manchester who feels this way. Doogie’s Bar and Grill’s owner Ray Sweet has also increased security. After the Orlando attack, both bars hired two doormen and updated the security system with an emergency button that can notify to police if needed.

Stevens, who has owned the bar for 15 years, said that people should be concerned and vigilant at all times. ”These attacks are not only targeted at the community LGBT people. It can happen with any other community,” he said. ”We live in a violent country.”

Stevens was born into a Republican family and supported Donald Trump in the last election, thinking that Trump would lessen taxes on small businesses and the middle class. But now he calls Trump” A horrible person,’’ he said. ‘

Democratic candidate Elizabeth Warren appeals to Stevens, who said Bernie Sanders is too far left for him. ”I am a moderate person who wants to grow his business”, he said

Meanwhile, fellow bar owner Sweet is a supporter of Pete Buttigieg. He said that he likes former mayor because he wants to continue Medicare and lower prescription drugs for all and because he also supports the Federal Equality Act.

”I am not supporting him because he is gay, but because he has a young mind and fresh ideas,” he said. ”He took stand on gun control and violence and I appreciate it,” he added.

He said that Bernie, Elizabeth and Pete are getting a lot of attention from the local LGBTQ community.  He said he has also heard of LGBTQ people who will vote for Buttigieg because they think that as a gay man, Buttigieg understands how important it is for advocating for LGBTQ equality.

On the policies of Donald Trump, Sweet said that Trump is putting America first even if he has to step on any other country to do it.

Sweet said he has some Gay Conservative friends who support Trump.  ”I try to explain to them how Trump insults LGBT people and those will disabilities, but I know Trump has a strong following.”

As far as attitudes in Manchester towards the gay community,  Sweet said that people have accepted LGBTQ citizens.  ”Our bar is open for all– those who are from LGBTQ and those who aren’t. We don’t discriminate,” he said. He mentioned that his business has never been affected by anyone and he never felt that there has never been any discrimination towards the business.

However, Michael Bernard, a transgender manager of the Element Lounge bar, thinks differently. ”People say New Hampshire is liberal with LGBT community and I agree to it.  But I have also faced discrimination here,” he said. ”A few years back someone threw garbage on me and abused me for my look.”

”I was born like this. I didn’t choose it. When will people accept it?” he asked.

Bernard doesn’t know much about politics and business but knows that New Hampshire’s primaries are a good time for the business. For today’s evening, he is wearing a pink top and applying mascara on eyes as the customer will be coming to her bar soon.

On the other side of the block, Stevens is welcoming Buttigieg supporters which include a mixed crowd of gay, lesbian, cross-dresser and straight. He is smiling and posing when someone is asking for photos.

”I feel the LGBT community is much more welcoming now than it once was in the country or when I was younger,” he said. ”I think it’s cool to be gay.”