Blankets of snow covered the desolate sidewalks on Main Street in Nashua, New Hampshire. The sun was out, but the chilly air prickled the skin. Nearby, residents sought refuge from the bitter 20 degree cold in Nashua Public Library.

In the library’s basement, an area designated for activities, Martha Alvarado spoke to a group of about a dozen Latin American immigrants like herself. On Saturdays, she dictates a citizenship preparation class.

Alvarado migrated from Colombia to the U.S. 20 years ago and moved to Nashua in 2010. She became a U.S. citizen in 2009, and she believes it is important for immigrants to make their vote count during Tuesday’s Democratic presidential primaries. Her vote will go to billionaire activist Tom Steyer.

“What is more beautiful than becoming an American citizen and voting?” she said. “Voting is very important. If we stay in this country it’s because we like the democratic system, we like politics here, the possibility of working.”

New Hampshire’s primaries are decisive for the Democratic Party’s battle for the presidential nomination. The primaries in the north-eastern state follow the polemic Iowa causes, whose official results were announced late Sunday night.

The voters in the last midterm elections were the most ethnically and racially diverse ever, according to Pew Research Center. In 2018, the number of naturalized-citizen voters nearly reached 10 million, almost equaling the 10.8 million naturalized citizens that voted in the 2016 presidential elections.

Among the 11 Democratic presidential hopefuls, Steyer is Alvarado’s first choice because of his policies on education and climate, particularly his promise of declaring state of emergency to tackle climate change if elected.

She hopes whoever prevails in November will make immigration his or her priority and propell reforms that will protect DACA recipients and provide an easier path for undocumented immigrants to become citizens.

Eva Castillo, director of New Hampshire Alliance for Immigrants and Refugees, has dedicated most of her life to advocating for immigrants. She arrived in the U.S. from Venezuela in 1975 and moved to New Hampshire in the early 1980s.

Sitting at a table in a Mexican restaurant in downtown Manchester, Castillo said there were few Latinos when she first moved to the Granite State, but has noticed that the Latino population has grown in the past years.

Those who identify as Hispanic or Latino makeup 3.9 percent of New Hampshire’s 1,359,711 citizens, according to the U.S. Census Bureau. White residents make up 93 percent of the population, making it the least racially diverse of the early caucuses and primary states.

“They don’t really put much of an effort to reach out to the Latinos, and they feel like we’re going to vote for them because what is the alternative?” she said. “But I am tired of voting for the lesser of two evils because evil is still evil. And they’re really not doing much for us as it is.”

She said the Democratic candidates have not made immigration a priority during their campaigns. In fact, the issue was absent from the debate stage in New Hampshire last Friday.

“They have the policies, but nobody has made it a special subject in their campaigns,” said Castillo. “They will answer questions if we ask them, but both in the debates they don’t really make an issue out of immigration, which is really frustrating and pretty sad to leave so many millions of people out of the picture.”

To get Latin American immigrants involved in the elections, Castillo argued, campaigns should hire bilingual staff and people of color, the campaigns’ literature should be available in Spanish.

No matter who wins the nomination, Castillo said, the aim for the upcoming presidential elections should be to vote out Trump.

“I hope everybody supports the winning candidate and that the Democratic Party realizes that the goal is to eventually defeat Trump and that we cannot start bickering about whose candidate is better,” said Castillo. “I don’t want to repeat what happened in the previous election.”

Michael Zhang and Suhu Liu attended last Saturday’s Democratic Party dinner in an arena in downtown Manchester to see which candidate has what it takes to beat Trump. The couple and their children walked through a swarm of potential voters and candidates’ supporters and stopped at a table with tech entrepreneur Andrew Yang’s campaign.

Zhang and Liu migrated from China in 2006, and their two children were born in the U.S.

For Zhang, 45, policies and personal character are a determining factor in winning the presidential election. The family’s top pick is Yang.

“We like Andrew Yang very much,” said Liu, 44. “We feel like we will vote for someone who most likely has a chance.”

Sandra Almonte, owner of the restaurant Don Quijote in Manchester, said Trump has helped improve the economy and her business has flourished since he took office. She does not agree, however, with his stance on issues such as immigration and hopes he gets voted out. 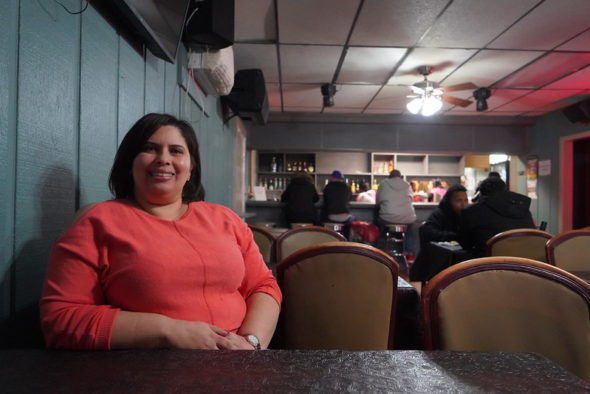 Sandra Almonte, 48, immigrated to the U.S. from the Dominican Republic. Her top Democratic presidential candidates are Joe Biden and Sen. Elizabeth Warren. Photo by Bessie Liu

Almonte arrived in the U.S. from the Dominican Republic in 1998 and she has owned the restaurant for almost 20 years. She employs 12 people, all of whom are immigrants too.

Speaking over the sounds of bachata and merengue coming from a jukebox, Almonte, 48, said her favorite candidates are Joe Biden and Sen. Elizabeth Warren.

“I like Joe Biden’s experience when he was with the Obama administration,” she said. “I really don’t follow politics much so I don’t know all the different details that they have, but I like for what Elizabeth Warren stands for, and I’d love to see a combination of them run our country.” 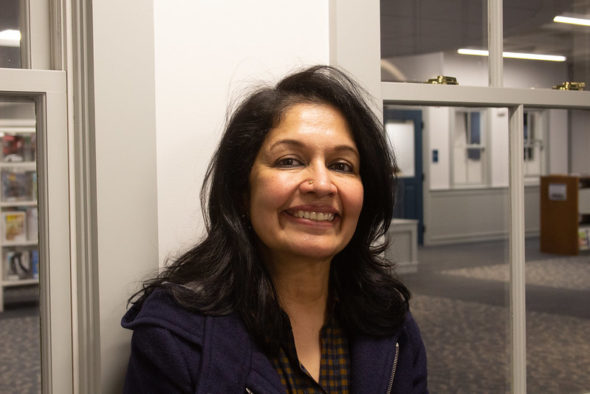 Deepa Mangalat, 55, is a volunteer and community worker in Nashua, New Hampshire. She will vote to get President Donald Trump out of office. Photo by Amanda Perez Pintado

Deepa Mangalat refused to say Trump’s name. She was terrified when he became the Republican nominee in 2016, and she fears that he will remain in office four more years if Democrats “don’t get their act together.”

“It’s voter apathy that got us to this place,” said Mangalat, 55. “It’s because people did not vote.”

Mangalat migrated from India and has lived in Nashua for 30 years. She has worked in the city as a volunteer and community worker.

During the last Democratic primaries, her candidate was Sen. Bernie Sanders, but this time around she is undecided. She said, however, that she would like to see a woman in the White House.

One thing is for certain: Mangalat will vote for the eventual nominee to get Trump out of office.

“Nobody can be as bad as the one sitting in the White House, nobody,” she said.