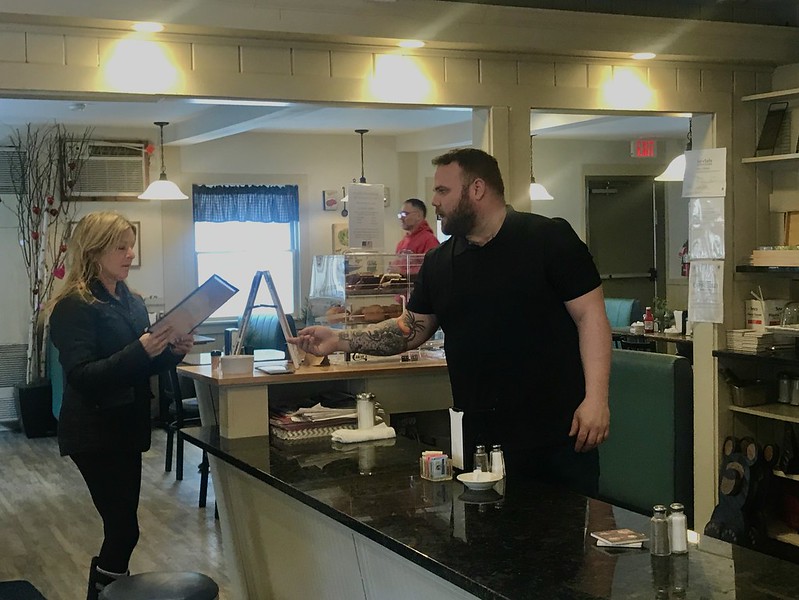 Teddy Fulton, who is in recovery, helps a customer at The Country Chef on a Saturday afternoon. Photo by Zishu Sherry Qin

Six months ago, Teddy Fulton was doing well as the assistant general manager of the Pour House Bar & Grill in Back Bay, Boston, a restaurant so popular that even celebrities like Rihanna were spotted there – a total of three times in just two days.

Six months later, Fulton found himself 60 miles away from the posh neighborhood he used to work for before, as the general manager of the more modest Country Chef restaurant in Wilton, New Hampshire, a town with a population of less than 4,000 and a sketchy mobile signal.

The reasons for the downturn in his fortunes was the time Fulton took off to enter treatment for his alcohol and drug addiction. After seeking treatment, the Boston job was not there anymore.

New Hampshire is in the midst of an addiction crisis that is now a front-and-center issue in the Democratic primary here. According to the National Institute on Drug Abuse, the rate of overdose deaths in New Hampshire has climbed steadily since 1999 and peaked in 2017 with 490 deaths, which ranked the third in the country.

Even though the number is expected to drop to 364 in 2019, when the final tally is made, the drug crisis remains to be the Granite staters’ biggest concern, according to a 2019 poll conducted by the University of New Hampshire.

“Everyone living in New Hampshire knows someone who has been struggling with opioid overdose,” said Theo Groh, 29, a resident of Manchester.

Many Democratic candidates treated the opioid epidemic a healthcare problem, but for former addicts like Fulton, it was an economic problem. Fulton said it was “fateful” to run into Holly Cekala, the owner of The Country House, who opened the restaurant in December 2019 with a mission to hire former drug addicts and provide them with a normal working environment.

Fulton had a wonderful resume in the hospitality industry and had run five restaurants and bars. Before the Pour House, he owned Cowboys Bar and Grill, a $3-a-drink bar in Woonsocket, Rhode Island until July 2019. But his successful career in the food business paused after booze and cocaine became a serious issue for him.

“You work weekends and nights, often time because of the hours, people are using drugs as crutches to get through the shift or up for a shift,” said Fulton.

Cekala herself suffered from the alcohol and drug culture of the hospitality industry. As a teenager, she rewarded herself with a drink at the end of a shift, which is common in a lot of places. “Then you started to look forward to these drinks,” she said.

People who work in this industry “are susceptible to addiction,” Cekala said. Her alcoholic issue then caused a car accident in which she was injured, and which put her on morphine to relieve the pain. “It’s just a spiral of events once you are addicted,” she said.

The workers in the accommodation and food service industry have the highest rates of illicit drug use ­—19.1% of all workers— of any profession in the U.S., according to a report by Substance Abuse and Mental Health Services Administration, a branch of the U.S. Department of Health and Human Services.

When seven Democratic candidates took the debate stage in Manchester on February 7, many talked about their plans to tackle the substance abuse crisis. Each had a different proposal.

As she has before, Minnesota Senator Amy Klobuchar mentioned her dad’s alcoholic history and said “this is personal to me.” She proposed a $100 billion policy to tax opioid manufacturers and use the money to expand treatment. Vice President Joe Biden stressed his early work on curbing drug overdose. Entrepreneur Andrew Yang supported supervised withdrawal sites and mandatory three-day treatment. Mayor Pete Buttigieg called for “decriminalizing all drugs and treating it as a medical issue but not a moral failure.”

Cekala watched the debate from her restaurant on Friday night but none of the candidates’ words appealed to her. “It’s not a healthcare problem, it’s an economic problem. People can’t find a decent job, they can’t support their families and pay for their rents, that’s depressing,” Cekala said.

For Fulton and Cekala, the question is “what is next after treatment?” In rehab, “you disappear from the normal world for 3 months, you get healthy and clean, and you get out of there. But you don’t have a job,” said Fulton.

After leaving the hospitality industry, Cekala studied psychology at Rhode Island College and since then managed several recovery community centers, including one at the Rhode Island Women’s Prison. In Fulton’s words, “Holly was a recovery celebrity in Rhode Island.”

After 20 years of working in charity organizations and as a certified recovery counselor, she made the move to open a restaurant in December 2019. “There are too many restrictions. Don’t share the numbers, don’t become a friend,” Cekala said, referring to the restrictions placed on counselors. “Why would I charge someone to be his friend? But that’s essentially what he needs. A friend.”

Instead, she decided to reenter the industry that once failed her. She opened The Country Chef and hired ten employees, with eight of them were former addicts.

Cekala was not the first employer hiring former addicts. Republican Governor Chris Sununu launched The Recovery Friendly Workplaces in New Hampshire in 2018, to push employers to hire people who are in recovery and provide their employees with education and training related to substance misuse and behavioral health. Cekala applauded the effort, but she thought it was “a little bit behavioral health heavy.”

“I am not a behavioral health provider, just a small business owner to create a normal work environment,” said Cekala.

At 3pm on Saturday, the last group of late brunch eaters left. Fulton started to wipe the table and brought dirty dishes back to the kitchen while making small jokes with Cekala, who worked at the cashier. “They are all kids to me, I just want to cuddle them,” Cekala said.

“When we put the restaurant back together, Holly and I often went on and on, it almost felt like a counseling session, which is really helpful,” said Fulton.

Fulton has been sober for 80 days now. He now works 50 hours a week. Although the hours are still long, but “coffee is free” and he has “people, who have also gone through this to talk to all the time.”

Behind the cashier, there stands a wall of liquor bottles. Cekala has two designated people to make drinks and Fulton is one of them. The 33-year-old restaurant manager has been in this industry “since he could remember” and pouring drinks is a day-to-day job. “I was just made for this, what was I supposed to do?” said Fulton.

But the motivation is different for Fulton now. Besides being a successful manager, he wants to “fill this place with once lost adults and kids” and build a stepping stone for them to get their lives back. People with drug records are often seen as troublesome and incapable of holding on jobs. “But one good reference can fix that resume forever,” said Fulton. “If we can give them experience and solid training here, they at least have us to call.”

Although Fulton has never foreseen his future in a family-style restaurant in New Hampshire, he called it “an interesting twist in his life.” And if the model of Cekala’s recovery-friendly workplace works, it would be a new start of Fulton’s career.

“If I can blend my talent with my recovery, God bless it,” Fulton said.