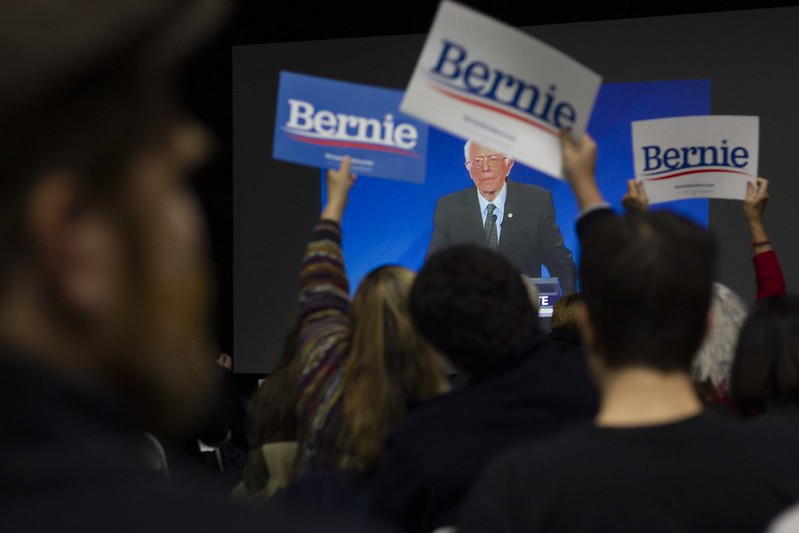 Faye, a 34-year-old woman from Southern California who uses a wheelchair used all her savings to fly in with her husband to volunteer for Democratic candidate Bernie Sanders at the New Hampshire primaries.

“I couldn’t think of anything more important to do right now”, says her husband, Paul, 35, at a debate watch party at a venue on the west side of the Merrimack River in Manchester.

At the moment, Faye and Paul may have reason for optimism. In a primary that is regarded as trend-setting for the presidential election in November, Vermont Senator Bernie Sanders is the leading candidate, polling at 28% of potential votes. In second position is former South Bend, Indiana, Mayor Pete Buttigieg with 21% of prospective votes.

Medicare for all, an overhaul of the current health care system into a single-payer government-run health plan proposed by Bernie Sanders and Massachusetts Senator Elizabeth Warren, is the main reason Faye and Paul support Sanders’ bid.

Faye and Paul are not their real names.  Because they are disclosing personal medical information they have asked that their names not be revealed.

“Bernie is on the side of the uninsured and underinsured”, said Ohio Senator Nina Turner and co-chair of the Sanders campaign, at a gathering of committed supporters at the debate watch party.

Faye has cerebral palsy and had an eight-month gap in her health insurance which left her without medical coverage.

“We were hoping that she doesn’t get sick”, said her husband, who spends most of his time taking care of her. Paul’s income as a caregiver for his wife was considered too high, so they lost their Medicare coverage, a federally funded health insurance covering citizens with limited income.

The couple was also no longer eligible for subsidies on the Affordable Care Act (ACA) marketplace because of Paul’s income. Paul challenged the decision of Covered California, the state’s official health marketplace, but after months of very little progress the couple enrolled in the private Kaiser health insurance.

Faye recalled that the months she wasn’t covered were “terrifying.” She had no regular doctor and had to pay for treatment out-of-pocket. “When you have cerebral palsy, stuff goes wrong quite often,’’ she added.

A Kaiser Family Foundation (KFF) survey shows 85% of Americans are in favor of the government doing more to help provide health insurance. It’s not only patients, but also the majority of physicians in the Granite State now supporting a single-payer health insurance system, said Gary Sobelson former president of the New Hampshire Medical Society, in a telephone interview.

“About one-third of my patients are on Medicare and this system works well for me,” said Sobelson, a family physician in Concord.

Whether it will be “Medicare for all” proposed by Bernie Sanders and Warren or the less radical “Medicare for all who want it” suggested by Pete Buttigieg, doctors and their money are shifting their campaign contributions towards the Democratic Party.

Health professionals donated $50 million to the Republican Party in the 2012 presidential campaign, which was $15 million more than what they gave the Democratic campaign. In the current presidential campaign the same group has donated $30.6 million to Democrats, which is twice as much that what they have given to President Trump’s re-election campaign according to data from the Open Secrets website which tracks campaign contributions.

“We shifted away from the Republican Party”, said Sobelson. He said that, decades ago, physicians were self-employed, running their business and, mostly,  Republican voters. But, he said that with more and more physicians working as employers in larger medical offices and hospitals their perception of the job changed.

“We work now with the premise that everyone should be insured, whether they are unemployed, or students, 65 or 25 years old,” said Sobelson. “It’s the sub specialists who are concerned about lower reimbursements due to a government-run single-payer system, he added.  “Those who are making a large sum of money.”

Not everyone, however, in the New Hampshire medical community shares Sobelson’s views.  On the east side of the Merrimack River in Manchester, a rapidly growing biotech industry is concerned about losing money through Medicare-For-All and by proposals to cut drug prices.

What was two centuries ago a hub for the textile industry has now turned into New Hampshire’s own Silicon Alley, focused on manufacturing human tissue and groundbreaking medical innovation. Both the Republican Governor of New Hampshire, Chris Sununu, and Democrat Mayor Joyce Craig have big hopes for the over 200 companies in the biotech and medtech industry.

But when Sanders and Warren announced their Medicare-For–All program in the summer of 2019, it was bad news for the industry of biopharmaceuticals because the proposal would reduce the prices paid for drugs.  As a result, the Nasdaq Biotech Index fell 4.5%, stocks of biopharma companies with locations in New Hampshire such as Merck & Co., also went down 4%.

While biotech stock prices recovered towards the end of the year, the nation’s largest biotech industry association, the Biotechnology Innovation Organization (BIO), has so far donated more to the Republican Party, which is seeking to cut the scope of the Affordable Care Act.

Tension in the biotech sector about policy steps to make health care affordable was still visible at the end of 2019.  In December last year 138 leaders of biotech companies wrote a letter to advocate for the rejection of the bipartisan Lower Drug Costs Now Act. This legislation, which is still pending in Congress, would allow the government to negotiate lower prices with pharmaceutical companies. Profits of biotech companies, an industry with high costs for research and development and a volatile market, fear significant losses.

Sobelson, however, hopes that this industry sector will not influence slow down the movement to extend public health insurance plans across the US.

“While biotech innovations and the medical tools are remarkable, even miraculous and physicians are extremely excited about innovations, this is somewhat marginal in the bigger picture,’’ said Sobelson.

Faye and her husband, Paul, spent about $3,000 on health care costs during the time they both weren’t covered. Paul was grateful that Faye stayed healthy throughout the eight months and had no serious health problems.  “I don’t think anyone should be in this position ever”, said Faye. “People’s health care should not be just simply cancelled.”