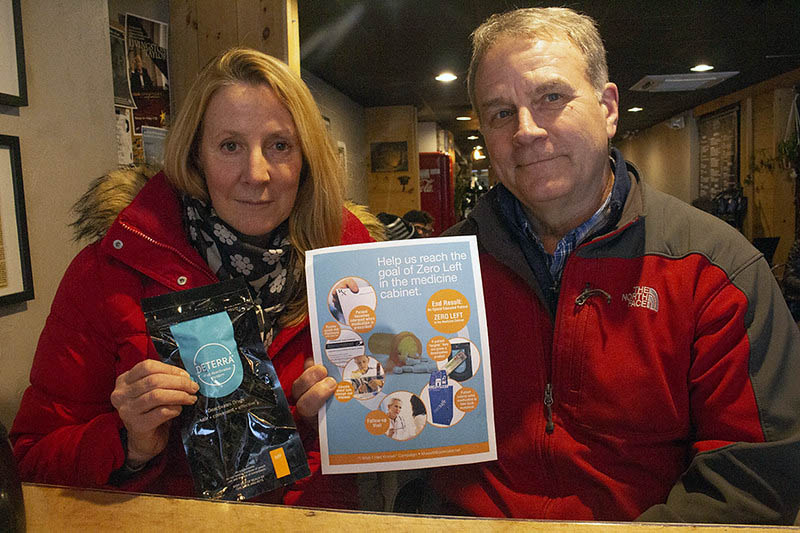 Jeanne and Jim Moser are the founders of Zero Left for the Medicine Cabinet. The campaign encourages people to dispose of excess opioids, instead of storing them in their medicine cabinets. Photo by Sope Aluko

Just throw them away.

Jim and Jeanne Moser couldn’t have imagined such a simple solution could have saved their son’s life in 2015. Five years later, the East Kingston, New Hampshire couple is working tirelessly to keep others from making the mistake they did, and educating others worldwide on the importance of disposing of excess prescription opioids through their national campaign, Zero Left for the Medicine Cabinet.

According to the American Society of Addiction,  four out of five people who develop an opioid addiction start with legally prescribed pills, whether it be pills prescribed for themselves, a friend, or family member. This was ultimately Adam’s fate, and what makes his death the most painful. Now with the New Hampshire primaries looming, the parents of four, like many other New Hampshire residents, are still pondering who the best candidate to tackle the important issues like the opioid crisis is.

On September 19, 2015, 27-year old Adam Moser died of a fentanyl overdose, after four years of secretly struggling with an addiction to opioids. Moser was one of four to die of an opioid overdose that weekend, and one of 444 opioid overdose deaths that year in New Hampshire, which has consistently been in the top five states with the highest rates for opioid deaths for the last four years.  “Unbeknownst to us, he was helping himself to opioids we had left over from our joint replacement surgeries,” Jeanne Moser said. “ We were prescribed these and neither of us really liked them, so we put them in our kitchen cabinet. By the time that we found out he had a drug problem, it was the night that the police officer told us he was dead.”

Just days after Adam’s funeral, Jeanne headed to the pharmacy to pick up pain medication for Jim, who had just had knee surgery which had been previously scheduled before Adam’s death.

She was shocked at the contents of the bottle.

“I was like, ‘Here we go again, ” she said, recalling the devastation of seeing 150 Percocet and Oxycontins being prescribed, and bursting into tears as she drove away.  “The doctor came to the funeral. Didn’t he know? Why would he do this?”

Per doctor’s orders, he only needed 30 pills, which were to be taken over the course of seven days.

“I was disgusted,” Jim Moser, who works as a surgical scrub deck, said.  “I ended up flushing the rest down the toilet.”

When Jim Moser was cleared to return to work, this was when the Mosers realized the gravity of the drug problem not only facing New Hampshire, but the country as whole, pushing them to begin brainstorming the ways they could join the fight against addiction.

“I was going down the road of how to get medication prescribed more accurately,” Jim Moser said. “No one asks you when you have surgery ‘How many pills did you actually use?’ Surgeons usually give you the maximum prescription so that they get less calls from patients asking for more.”

In 2017, the pair began building the campaign with flyers, PSAs, and public addresses around the country about the dangers of unprescribed opioid use, even getting recognized by President Trump during a March 2018 speech about his $6 billion plan for fighting the opioid crisis at Manchester Community College. Most notably, the couple was able to join forces with doctor and fellow friend, Thomas McGovern, to distribute Deterra, a disposable drug deactivation system that uses water and deactivated charcoal to dilute pills when mixed together in a plastic pouch. The campaign’s launch was on January 1, 2019 and as of March 2019, the couple has helped healthcare facilities throughout the country to distribute over 175,000 Deterra packages.  In addition to the implementation of the Deterra packages, New Hampshire law now requires an informed consent form be given to patients needing opioids. In addition to detailing the possible risks and side effects of opioids, the form also asks patients to do a risk assesment where they are asked about family or personal history of substance abuse, sexual abuse, and psychological disease such as ADD or OCD.

The Mosers recognize that because a national crisis can’t be solved by one person, leaving them unsure who would be the best candidate to handle such a national, and personal, crisis, as the nation’s next President.

“The problem is so big. The DEA will tell you they can’t arrest their way out of this problem. When I hear a political candidate speak about the opioid crisis, it doesn’t matter what side they are on, or if I personally like them or not, they can’t really promise anything,” Jeanne said. “Maybe through the healthcare funding avenue that it could get fixed. Getting folks the mental health they need may help in not leading them down that path.”

In the eyes of recovering addict and author Timothy Macmahan King, who became addicted to prescribed opioids meant to treat acute necrotizing pancreatitis, the policies that the presidential candidates have proposed for addressing the opioid crisis are much better than that of Trump’s, who he believes is only talking about the opioid crisis for political gain.

“There are candidates that you connect with because of policy issues and there are candidates you connect with because you believe the stories they are telling about the world,” said King,  a storyteller himself, recently writing a book called “Addiction Nation: What the Opioid Crisis Reveals About Us”  where he talks about his journey to recovery, as he questioned and explored the things that fuel addiction in a society.

“Donald Trump has named an issue that resonates with his base, while not following through with good policy. I’m watching what he is doing and how effective it is and I’m shocked that the Democrats don’t see it and find a way to counter it.”

In order to be able to pick the right candidate, King said he needs a candidate who presents a healthy balance of relating to the people on a personal level, and a policy level when it comes to important issues. For him, that candidate would be Andrew Yang.

“I think he is doing the best job at creating a narrative that connects with what people are experiencing in their day to day lives through his big policy ideas. It’s a long shot for him to become president but I’m really glad his voice is in the mix but I hope other Democrats keep listening to what he had to say.”

Nik Orestis, retired paramedic and firefighter for the city of Manchester, also feels like the role mental health has in drug addiction really needs to be addressed, remembering the horrors he saw while working in emergency services, which he worked in from 1992 to 2017.

“I worked two 24 hour days and had four days off, “ Orestis said. “It was a great career, but we got overwhelmed with drug and mental health cases. It was brutal. When I would see people in the back of the ambulance, the older generation would say that it started because of their prescription medication. For the younger kids, the mental illness had a lot to do with it. They just wanted to get away and it [using opioids] was a way for them to handle depression, suicidal thoughts, schizophrenia, and things like that.”

Despite starting in 1992 when the opioid crisis was really just beginning, Orestis actually saw some of the worst cases around 2017.

“I was seeing five to seven overdoses a day in the city of Manchester alone. Some of them were repeats,” Orestis said. “They overdose, you give them a dose of Narcan, they come back, and you would pick them up later that night for the same thing. From my colleagues that I’m still friendly with today, it’s still pretty bad.”

Orestis looks forward to candidates providing better access to mental health as a means to combating the opioid crisis and believes that Bernie Sanders is the best man for the job because of his Medicare for All plan.

“I agree with him 100% that medical care for everyone should be a right so I’m aligning myself with Bernie Sanders,” he said. “How far that will go, I don’t know but I like his platform. The biggest thing I hear from people is ‘How is he going to pay for it?’ Hopefully we all find out.”