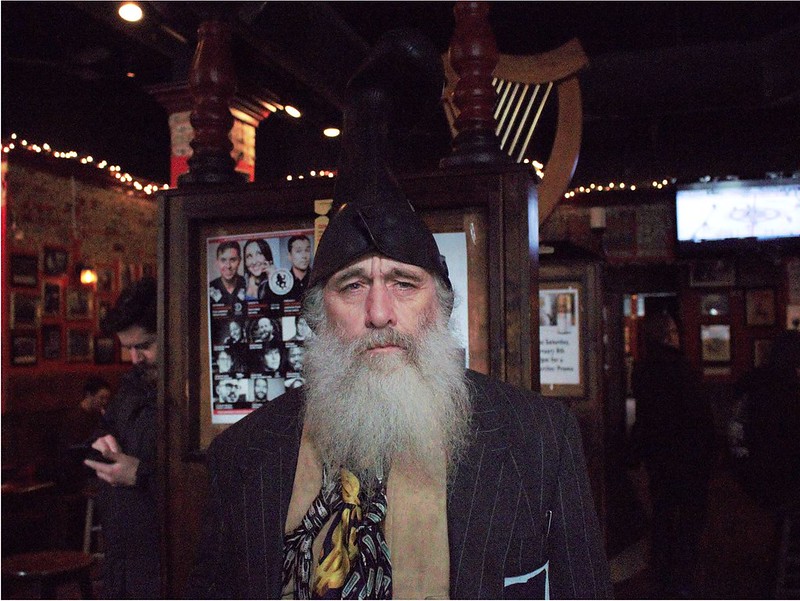 Vermin Supreme, the Libertarian nominee, campaigns for President through Manchester and is known for wearing a boot on his head and carrying a large toothbrush. He hopes to win over the Republican and Democratic nominees at the New Hampshire Primary Election on Tuesday, Feb 11th. Photo by Sami Roberts

Over the weekend, thousands of people flocked to New Hampshire to participate in democracy.  They canvassed, demonstrated, protested, cheered, and booed at the candidates they did or didn’t support.  The candidates, Democratic and Republican alike, are all pitching their arguments to New Hampshire residents before the state’s Primary Election on Tuesday, February 11th.

Outside of those stadiums, community colleges, and sports halls, where events took place, in a small pub in the center of Manchester, there was one additional candidate making his argument: Vermin Supreme.

“I’m doing the same thing as I have every campaign season for the past 30 years I suppose,” Supreme said. “Running for President.”

With multiple ties around his neck and a long gray beard, Supreme, 58, strolled into a local pub with a man dressed in a Lemur onesie, playing an acoustic guitar in his wake.

Supreme, from Baltimore, Maryland, typically campaigns with a large toothbrush and a black boot on his head.  The toothbrush was missing, but the boot was there tall and proud.  “It stands for all that is good in America,” Supreme said. “The ability to wear a rubber boot on your head if you want to.”

His platform is for mandatory dental hygiene across America, time-travel research, and free ponies for every American, (a Pony-Based Economy).  Oh, and preparing for the zombie apocalypse.  He’s the winner of the 2020 New Hampshire Libertarian primary, held Jan 11, with 26 votes out of 110.

Supreme’s website more clearly outlines the idea behind the man in the boot: “Through satire and humor, I present real issues with fantastical context, in-depth analysis, and a dose of much-needed humor in the political sphere,” it declares. “With thought provoking activism, I stand against the tyrannical duopoly, the violent police state, and all forms of overreaching government.”

Supreme’s political parties have varied from Democrat to Republican to Libertarian.  Supreme has successfully drawn attention to his activism and political satire, starring in the documentary Who Is Vermin Supreme? An Outsider Odyssey, directed by Steve Onderick in 2014. In 2011, he participated in Occupy Boston protests, and in 2018 he ran for attorney general of Kansas, against Derek Schmidt.  He did not become the new Kansas attorney general.

During primary season, he can be found wandering the streets of Manchester.

“He comes around every four years. He’s more of a performance artist,” said a local New Hampshire resident, who requested to be called Becky. “He wants to put things out there that you might not necessarily think about. He’s just there to shake it up a little, I think.”

Between election years, Supreme resumes his unique role as a political activist, participating in protests, getting hired for parties or events to entertain, inform, and meet his supporters: “A Night Out in Boston with Vermin Supreme,” “An Evening with Vermin Supreme” in Ohio, “Vermin Supreme Does Nashville Cinema Spectacular,” and “North Texas Anarchist Book Fair,” to name a few.

Though the New Hampshire locals greeted Supreme with the same bemusement they might greet the neighbor’s friendly cat, some were not opposed to his promises as a presidential candidate, particularly the free ponies.

“You can use it for transportation, you can use the manure for your garden,” Becky said, “It’s very eco-friendly.”

On a more serious note, the most important issues for Becky are health care and income equality.  “Vermin doesn’t talk about those things,” she said. “Not that I’ve heard.” 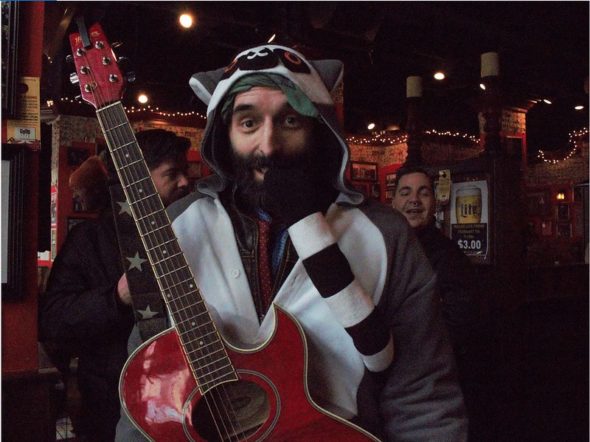 Rob Potylo, from Pasadena, CA, campaigns in Manchester, NH for Vermin Supreme, who is running for president and won the Libertarian nomination this year. He calls himself Supreme’s “musical secretary.” Photo by Sami Roberts.

The Lemur playing the guitar—who calls himself Supreme’s “musical secretary” but whose actual name is Rob Potylo—a musician and comedian.  He is originally from Massachusetts, but lives in Pasadena, California and comes to New Hampshire every four years to campaign for Supreme.

“We’re trying to get some last-minute votes,” Potylo said. “He’s already won the New Hampshire Primary for the Libertarian vote, but we want to make sure that Tuesday we can win everything else—the Republican Primary, the Democratic Primary…”  He broke into song, the chorus of which was “hotdogs and applesauce.”  Potylo has done this for many elections in the past, and his vote remains the same: Vermin Supreme for President.

But what does the lemur onesie have to do with promoting Supreme’s candidacy?

Sami Roberts is a graduate student in the Magazine and Digital Storytelling concentration.