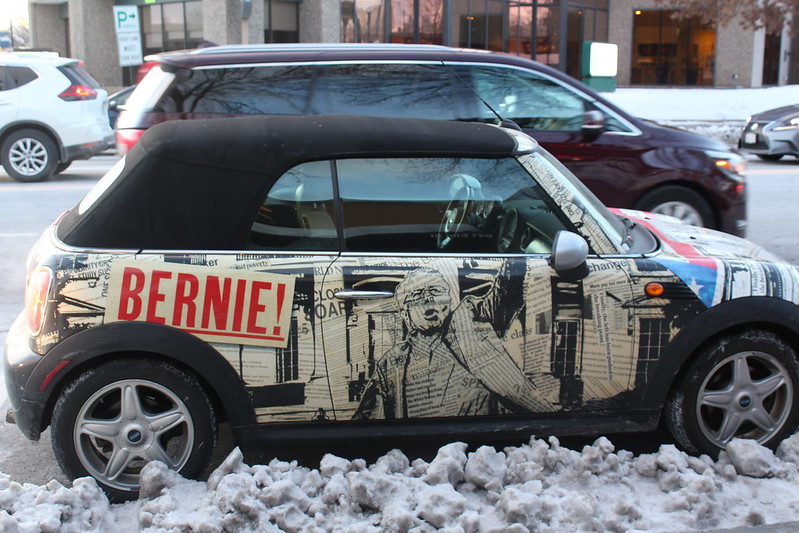 A Bernie Saunders wrapped Mini Cooper sits in snow in Manchester, New Hampshire. Temperatures were frigid on the eve of the New Hamshire Primary. Photo by Ahad Sanwari

“It is balmy by our standards here now,” Senator Maggie Hassan said about New Hampshire during the 2020 McIntyre Shaheen Democratic Dinner Saturday night in Manchester. But for attendees and everyone else out and about during the political season, that couldn’t be further from the truth. This point was eloquently made by a group of high school students from New York campaigning for Pete Buttigieg when they said, “It’s so f***ing cold out here!”

New Hampshire has been hosting presidential primaries since 1916 and started its tradition of being the first presidential primary in 1920. But as you drive into the state on the way to the center of all the activity, Manchester, you’re greeted by large tracts of open land and wilderness, biting winds, and snow. Less political hub, more winter wonderland, despite the occasional shop or restaurant with a window sign declaring their political affiliation.

Being the first primary didn’t always require risking frostbite. New Hampshire state law stipulates that the primary take place on the second Tuesday in March. But it’s been pushed earlier and earlier to resist the efforts of other states that shifted their primaries earlier to acquire some of the action and influence that being first provides. Is it time for New Hampshire to give it up?

For New Hampshire residents, primary season in New Hampshire, like the leap year, is a once-in-four-years celebration that isn’t unlike the Olympics. For many of the residents here, it’s the biggest thing that happens and they’re incredibly proud of it. “No one even really knows where New Hampshire is on the map. So I don’t blame them for wanting to hold on to what makes people think of the state,” says Ethan Manning, who moved to Manchester from Massachusetts three years ago and is voting in his first New Hampshire primary. But his brother, Jonah, thinks differently. “I certainly don’t see any rational reason to have it here.”

Temperatures during the weekend before the Feb. 11 primary were defiantly sub-zero in the main cities/towns/hamlets/what-have-you that saw some buzz. A pro-life campaigner, who wanted to be known as Kirsch,  battled the cold like many others outside St. Anselm College. As signs were blown away and hands started to go numb, she contemplated whether shifting the New Hampshire primaries back a couple weeks wouldn’t be such a bad idea. “It definitely is freezing,” she said, trying to keep her coat from flying off. 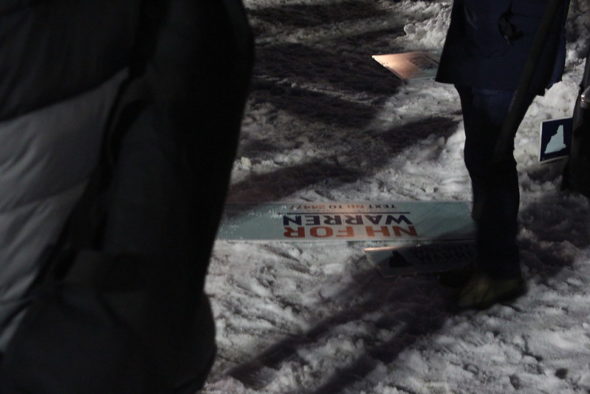 A Warren campaign sign lies in the snow outside of St Anselm’s college in Manchester, New Hampshire ,the site of Friday night’s Democratic Debate. Photo by Ahad Sanwari.

Martin Flink, a journalist who came to Manchester from Denmark, spent the 2016 primaries in sunny (well, sunnier) Florida. He argues that there are more strikes against New Hampshire than just snow. “If they could find states that were more representative of the whole country,” he says, “I think it would be a better direction for the candidates.” New Hampshire is one of the least ethnically diverse states in the country, with 92% of the population consisting of non-Hispanic whites (according to the 2010 census).

What is it that keeps people coming back? Is it Elizabeth Warren’s campaigning playlist that encompasses everything from Whitney Houston’s “I Wanna Dance with Somebody” to Aretha Franklin’s “Respect”? Is it the prospect of seeing the Yang gang parading around with their giant 1000 dollar bill with Andrew Yang’s face on it? Is it the incredibly catchy “Boot, Edge, Edge” chant? Is it the the joy of seeing Tom Steyer at the McIntyre Shaheen dinner talk about how many times he wants to “kick Trump’s ass” (a count was kept: six times)?

It just might be the willingness of the candidates themselves to bear the cold (how Elizabeth Warren survives in that minimal coat is a mystery) that drives the masses. Warren, in particular, lured out quite a few canvassers at an event Saturday (?) at Manchester Community College. This included Isaac Norwich, who drove up from Boston with a group of other Boston Warren supporters. “It’s part of the process,” he says. “We brought gloves, we brought hand warmers, we brought hats — what we gotta do to reach other people and get the message out.”

A town hall event at Rochester brought together over 1100 people in support of Senator Sanders. “I feel like if you’re inspired enough by your candidate,” says Jonah, “the weather is a non-factor.”

Access might be the most important factor in the prevalence of New Hampshire as a primary starting point. “I think it’s hard to find any other place to get as close to the candidates with all the town halls and debates going on,” says Flink. “Access is very good in order to keep an open democracy, be transparent and letting the voters get to know you and ask the questions they want to.”

It doesn’t seem like New Hampshire’s status as numero uno might be changing anytime soon, no matter how hard the other states try. As long as it doesn’t end up like the 2020 Iowa caucus, America can take pleasure in knowing that maybe, just maybe, New Hampshire might yield their next president.