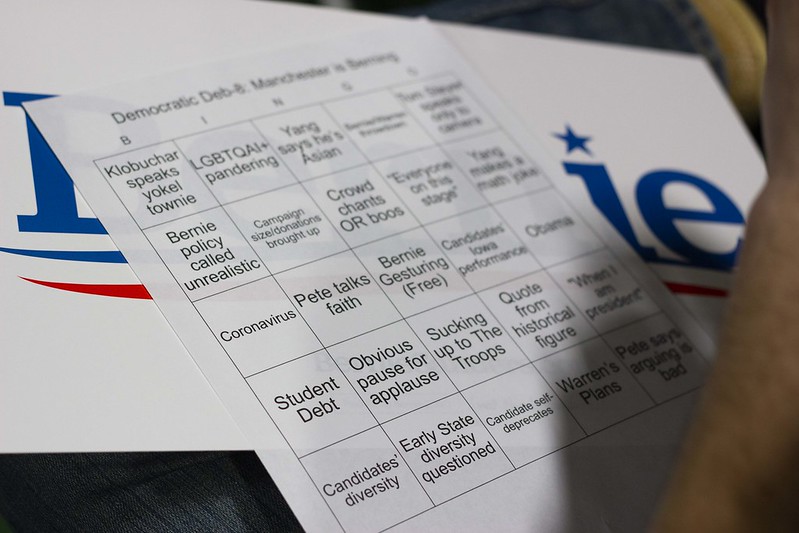 During a debate watch party for Bernie Sanders supporters, some people played a version of Bingo with some of the expected quotes and moves from different democratic candidates. Photo by Catarina Lamelas Moura

LuAnn Durst and Makayla Haynes live in the same county in southern New Hampshire. When it comes to politics, however, they might as well be from different planets.

Durst, a 50-year-old Uber driver from Hillsborough, a town in the northwest corner of the county, has regained her financial footing after some setbacks and attributes her good fortunes to President Donald Trump.

“I feel comfortable and stable,” she said, as she navigated her Uber through the streets of Manchester, a city in the county’s northeast end. “I don’t have to worry about a job. Everybody I know is working.”

Haynes, a 21-year-old hairstylist with green and yellow locks, said she is lucky to be working in  a small salon in Manchester. A supporter of Sen. Bernie Sanders’ presidential bid, she doesn’t share the enthusiasm of Republicans such as Durst when she hears them talk of a good economy.

Durst’s and Haynes’ views reflect the growing rift in how voters in the two parties see their economic prospects, even if they live in the same geographic area. An October survey by the University of New Hampshire found that 86% of Republicans in New Hampshire expected good times for local businesses over the next year, but only 36% of Democrats did.

The poll, commissioned by the state’s Business and Industry Association, also showed that the percentage of Democrats anticipating bad economic times ahead for the state has reached the highest point since October 2011, a time when the country was still recovering from a recession.

Andrew Smith, a UNH professor and the director of the university’s survey center, said New Hampshire reflects a national trend. The divergence in the economic outlook has widened since the 2000 election and has become more pronounced since Trump took office in 2016, he said.

“We see the world through red-colored glasses or blue-colored glasses,” Smith said. “Trump is focused on the state of the U.S. economy. It’s the strongest message going forward for his reelection. Democrats don’t want to hear that.”

Recent economic numbers give both camps something to support their views.

In December 2019, unemployment in New Hampshire was 2.6%, one of the lowest in the nation and well below the country’s 3.5%, according to state and federal agencies.

The state’s 2018 median hourly wage of $19.17 exceeded national levels, but average pay that year declined when adjusted for inflation, according to a report by the UNH’s Carsey School of Public Policy.

“Over recent years, average wages have barely kept up with rising costs in New Hampshire or not kept up at all,” according to the report.

Still, the University of New Hampshire economic outlook survey also found that 91% of respondents who voted for President Donald Trump in 2016 had rosy expectations. That was the same rate for conservative radio listeners as well.

Durst is one such voter. She’s backing Trump again in November, and she does not look back fondly at President Barack Obama.

After leaving a $25-an-hour job as a restaurant manager at Burger King in 2012, she said the only other position she could find paid her $13 an hour.

Durst’s health insurance premium jumped from $85 a week to over $200 around that time, she said, and she was already at risk of missing mortgage payments. She dropped her coverage and pushed two of her children, then 15 and 17, to get jobs so they could pitch in to cover household expenses.

“They shouldn’t have had to do that,” Durst said.

These days, Durst drives for Uber and Lyft full time and said her pay averages $20 an hour. She got health insurance again in 2018, and she’s caught up on her mortgage. Durst added that she’s paying less in taxes after Trump’s 2017 reforms, and that her pension savings have grown.

Meanwhile, Doug Cook, a 57-year-old Trump supporter from Milford, said construction activity in his area has increased since the president took office.

That’s been good news for the company where he works, which rents equipment such as forklifts and excavators to contractors and commercial builders.

“It’s like we’re printing money,” he said at a Trump campaign event Saturday in Brookline, a town on the Massachusetts border. Cook said he is registered as an independent but votes Republican.

Back in Manchester, Jim McLeod, a Democrat, sounded a different note. He said the tariffs Trump imposed on China as part of his trade war had a “tremendous impact” on the company where he works, which sells commercial plumbing parts.

That’s because the firm imports finished products from China, said McLeod, who has been campaigning for Pete Buttigieg and will be one of his delegates to the Democratic convention if the former South Bend, Indiana, mayor does well in the New Hampshire primaries.

“My impression is that all business is going to improve when we have an environment that is more predictable,” McLeod said. “The unpredictability of what comes out of the administration now is affecting business.”

Jim Roche, who leads the non-partisan BIA, said Democrats are fearing the worst while Republicans are overly optimistic.

He said he hasn’t seen in New Hampshire the vitriolic language commonly found in political discourse in other states or at the national level, adding that politicians “are often to blame because they make it personal with their language.”

“My fear is that we may become just another state where members of opposite parties don’t speak to one another,” Roche said.

For her part, Haynes, the hairstylist, sees a disconnect between her Republican friends’ statements about the economy and what’s going on in their lives.

“What they say doesn’t really align with what’s actually happening in terms of themselves,” she said. “It baffles me when I see people who are conservatives who are struggling. The idea I’ve gotten from the Republican party and conservatives, in general, is very, like, ‘It’s great.’”

Haynes finds that the rosy economic outlook of her Republican friends and what she observes about their financial struggles does not match. But her Trump-supporting friends remain firm in their beliefs and tell her and her fellow Democrats: “I don’t know what you guys are talking about. Everything’s fine.”