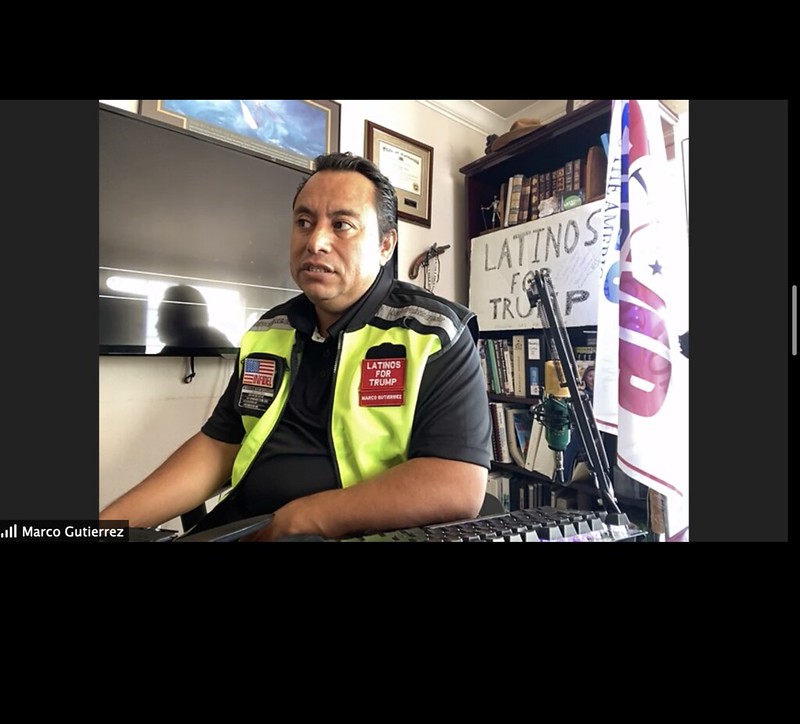 For Marco Gutierrez, a 46 year-old Mexican-American from California, President Trump took a “necessary risk” when deciding to host a rally this past week in Nevada where social distancing and the use of masks were absent.

“I think it’s a little irresponsible,” said Gutierrez. “But what’s most important here, and this should worry Biden, is that these people are willing to do that.”

Gutierrez, who is the leader of an independent group called “Latinos for Trump,” began supporting Trump’s presidential bid in 2016 after facing bankruptcy due to the market crash in 2008. For Gutierrez, Trump was the candidate he was searching for.

“He said he was gonna bring jobs back,” said Gutierrez. “I was really disappointed in the economy and all the people and how things had been going for the last eight years with Obama.”

Latinos have been a major target of the Covid-19 pandemic. A recent study done by the Center for Disease Control (CDC),  proves that this population is at a higher risk of contracting the illness and requiring hospitalization than other ethnicities and races. The same study shows that Latinos also have a high death rate related to the virus.

Regardless, Gutierrez is unsure if the quarantining was truly worth it or not. Although he does believe CDC guidelines like wearing a mask and social distancing should be followed, he still thinks the decision to shut down entirely created an economic unrest similar to the one that affected him during the Obama administration.

“I personally feel that the lockdown should not have lasted as long as it has,” said Pedroarias. “Especially in places where Democrat governors and mayors have control over the economy. I think that they’ve done a huge disservice and a lot of injury has been caused to people who own businesses.”

For Pedroarias, the way President Trump managed the situation was ideal, even though the president admitted to Bob Woodward that he downplayed the virus earlier this year. Pedroarias believes the situation was taken out of context because of who it was.

“What he is trying to say there is that he didn’t go full on berzerk,” he said. “I support the fact that he didn’t come out guns blazing and tried to scare people in order to make them submit to staying at home.”

Pedroarias also believes that there has been a double standard when it comes to coronavirus prevention measures. Pedroarias feels there should be equal handling of all social events, from political rallies to protests. He also thinks the country forgot a pandemic was happening when protests were being held across the country, but immediately expressed concern when a political rally was hosted by Trump.

“I would respect it more If some of those regulations and rules were also applied to the people that are protesting or riding and looting,” said Pedroarias. “The media really wasn’t worried they weren’t focused on ‘this protestor isn’t wearing a mask’ it was more the ‘why are they protesting.’ The issue was bigger than the disease at that point and I think that if you’re gonna have a double standard like that it sends the wrong message to people.”

According to a poll by the Wall Street Journal, 62 percent of Latinos support Joe Biden for the presidency in 2020. Placing Trump in a disadvantage trying to gain as much as the Latino vote as possible before November 3rd.

Latino voters like Mirella Manilla, a 23 year-old from South Carolina, the decision of the president deciding to host a rally amidst the pandemic was “irresponsible” and “selfish.”

“The scientists were telling us this is a real thing,” said Manilla. “For him to think he’s powerful enough to just ignore the rules, it looks really bad. Not just on the president but the United States as a whole.”