Theresa, who declined to give her last name, lays flowers at the portrait of her sister- in-law, Theresa La Trace. Photo by Annie Burky

Theresa La Trace from Howard Beach, Queens loved all things yellow, especially sunflowers and lemons. So when her sister in law, also named Theresa, planned to attend the Queens Covid Remembrance Day on May 1, she knew which flowers to bring.

Theresa laid the small bouquet sunflowers in front of a portrait of La Trace on a bench at the Forest Park bandshell alongside photos of almost 200 victims of Covid-19. The bereaved filled the remaining benches to begin a day that would draw an estimated 500 participants and be broadcasted by Queens Public Television. An approximate 2,000 viewers watched the event on YouTube, Facebook and QPTV.

“Things like this matter, how we live our lives after they’re gone matters,” said Theresa, who declined to give her last name.

As a day of ceremonies began there were all the tell-tale signs of a funeral—scattered sobs and consoling speeches. A collection of politicians, faith leaders, poets, and singers took the stage to begin the 1 p.m. multi-lingual, interfaith ceremony.

The ceremony concluded with an invitation for the bereaved to find their loved ones among the 16 rows  filled with the portraits of Queens residents who lost their lives in the epicenter of the epicenter. All were drawn in front of a yellow heart, the color representing Covid. A curtain of yellow hearts, the backdrop of the bandshell, listed names of 700 victims from all over the world. 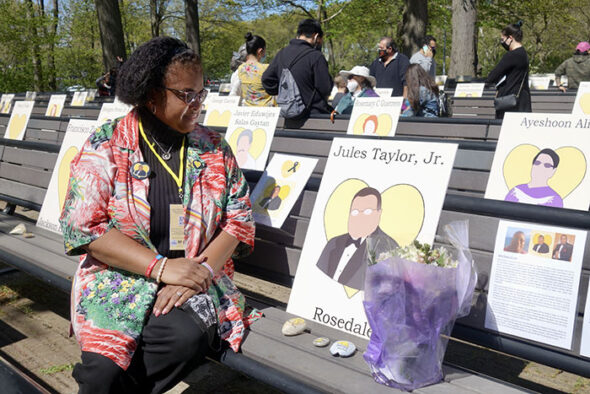 EmmLynn Taylor brought a vase filled with flowers and a laminated two-page obituary to place alongside the portrait of her husband, Jules Taylor Jr.  “Monday will be the one-year anniversary,” Taylor said. “They said the firsts are the worst. I think today will be a bridge to year two.”

EmyLou Rodriguez had this in mind when planning the event. She lost both her parents within two weeks of each other. Antonio B. Solomon and Estelita Solomon immigrated from the Philippines separately and fell in love in New York. “Tony” was a U.S. Navy Veteran and was often overseas. “Estie” was a retired nurse. At the time of contracting Covid they lived in Queens Village. Estie was 72-years-old, Tony was 71.  Both passed with the company of nurses. Their funerals were truncated, family members unable to hug.

Rodriguez, a 43-year-old senior grants specialist for NYU Langone Health, couldn’t speak about their deaths but found comfort in Facebook groups where quarantined mourners created a Covid-loss community. Within one of these chats, the idea for a vigil was born, volunteers were recruited and donations were solicited.

“When I saw other people experiencing the same thing I think that’s what gave me the strength to share my parents’ story,” said Rodriguez, a co-chair of the Queens Covid Remembrance Day committee. “When I realized how much it helped me to tell their story I wanted to give others the opportunity to do the same.” 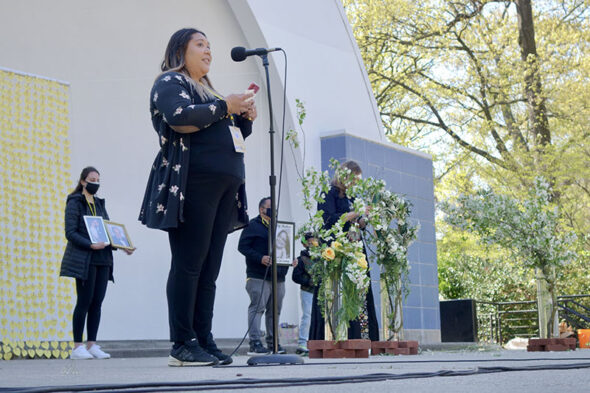 For the 4 p.m. floral hearts ceremony families once again took their seats. In a procession down the center aisle, artist Kristina Libby, along with three speakers who lost family to Covid, carried flowers and photos of the deceased Under the bandshell, Libby placed a floral art piece including a heart-shaped funeral wreath.

“What this is about is making space so that everyone who has lost someone or something has a space to tell their story,” Libby said.

When day gave way to night at 7 p.m., candles were distributed, performers sang uplifting ballads and Rodriguez read a letter her father wrote to her mother sometime during their 43 years of marriage.

“ ‘Well, honey, my love, I’ll be waiting for your much awaited response. Take care of yourself and the kids and your mom. My warm embrace and hot kisses,’ ” Rodriguez said. “I extend the same wishes to you all. While they wait our return I would like you to heed their message—take good care of yourself, your kids, your parents.”