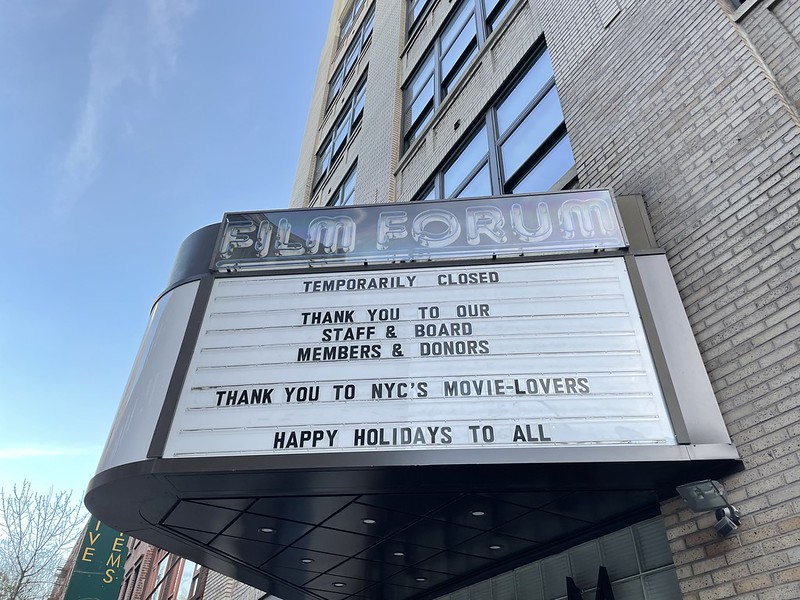 Film Forum in Greenwich Village, Manhattan remains shuttered due to the impact of COVID-19, 11/29. Photo by Courtney Guarino

The lights dim. The drama of the opening credits unfold. The smell of buttery popcorn fills the air. The shared movie going experience remains a distant memory for many in New York City, where movie theatres have been shuttered for over nine months. And although uncertainty continues, New York City’s remaining independent cinemas are hanging on due to their small size and outpour of support from loyal members.

“Interestingly and wonderfully we have found our members to be incredibly faithful during this time,” Sonya Chung, Deputy Director of Film Forum in Greenwich Village, said. “Some people were buying memberships during our closure. They understood they weren’t going to get the membership benefits and that we weren’t screening movies, but they were getting memberships just to support us.”

Film Forum is a nonprofit movie theater that celebrates their 50th anniversary this year. Some of the 6,000 members have grown up regularly attending screenings. Of the members who were once students in the neighborhood, Chung said that they now bring their children along on the weekends to enjoy junior programming. But since their closure on March 15th, virtual screenings have taken the place of movies on the big screen – bringing in just a small fraction of what normal ticket sales would normally provide but with almost the same amount of work.

“It requires much of the same work to screen these virtually — we have to watch the films, select the films, do the same kind of outreach to the press,” Chung said.

Prior to COVID ticket sales, concession and merchandise made up approximately 40% of Film Forum’s total annual income — since their closure, they haven’t had these same income sources, leading to furloughs and layoffs within the company. The majority of their effort now is on fundraising. In spring, they held a fundraiser which brought in $100,000 from over 1,000 donors, twice as much as what they raised in 2019.

“It was clear the supporters were really coming forward to say we really want you to be here when this is all over and we miss you,” Chung said.

In a normal year, Anthology Film Archives in would have roughly 45,000 people attend screenings in their two theaters. Around 35% of their $1million projected income would come from these screenings and renting out the theater, bringing around $350,000 in revenue annually. Anthology has pivoted to provide online programming on various platforms to keep audiences engaged.

“Last week, I opened a check for $1.79 which was our share of the screening for a certain period,” John Mhiripiri, Anthology’s Director, said. “Obviously that’s on the extreme end. But in half a year of online screenings, I would be surprised if we even earned a couple thousand dollars. There is just no way online movie screenings are going to generate the income we depend on as a theater.”

Anthology’s loyal customer base view the establishment as a staple in a part of the town that they see disappearing. Mhiripiri said it’s a community hub of sorts in the East Village, where students, filmmakers and artists are able to gather. And due to members’ and donors’ generous donations, the crucial PPP loan, and owning the building — no rent payments just utilities — they’ve managed to limp along.

“Some emergency grants have been offered, from private foundation sources and others through the CARES Act,” said Mhiripiri. “We had a great deal of support in April, May and June from our own constituents from Anthology’s members and supporters. We appealed to them to help us out at this time and people did.”

Anthology has continued to receive support from members and donors which has helped offset the loss of income from their programming and theater rentals. Eight core staff remain, while about twenty five of the theater staff — ushers, projectionists, managers, and box office ticket agents — have been furloughed.

Syndicated, a movie theater, but also a bar and restaurant nestled in Bushwick, came to realize only after their doors shuttered how much their customers came for their movie screenings first and the booze and food second. Customers came to show their support for the neighborhood staple once they opened for outdoor dining, but it was only once Syndicated started screening outdoor movies that business really picked up.

“The outdoor screenings have made it far more illuminating for us that our movie screenings are a main driver of our business, “ Tim Chung, Co-founder and Owner of Syndicated, said. “The food, drinks, and environment are an added bonus.”

Aside from their loyal audiences, the small operating size of these indie cinemas have been beneficial during these trying times. Whereas the large multiplexes are teetering on the edge of bankruptcy, being independent allows these institutions to keep functioning because they can control their economies of scale.

“We’re not so big and that is what helps us a lot, we’re a medium sized non-profit,” Mhiripiri said. “We’re not dependent on having the next Christopher Nolan sell the theater out. We have intentionally remained totally independent and done our programming as free from commercial concerns as we can.”