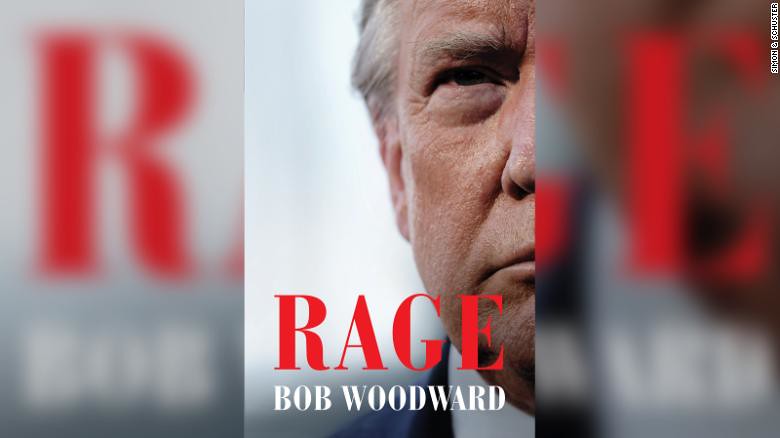 Bob Woodward’s book “Rage” shows a contrast between Trump’s understand of the risk posed by COVID and his national response. Photo courtesy of Simon and Schuster.

Trump voters are unfazed by the latest scandal to rock his administration.  For many of his supporters, journalist Bob Woodward’s tapes of Trump admitting that Covid was a deadly virus as early as February, isn’t a big deal.

“He has to go with the information he has at the moment,” Eldon Tobias, a Trump supporter,  said. “If you start looking at it six months later, people complain about all kinds of things. I think they’re just way over-reacting about it, everything has become so political.”

Tobias, who lives in Idaho, voted for Trump in 2016 and looks forward to voting for him again in November.  He admires Trump for always speaking his mind, a trait he thinks many people dislike. He doesn’t think that the Woodward tapes indicate that Trump was deceptive.

“I don’t have a problem with it, what could he have said?” Tobias said. “He could have said, ok everybody run and hide in your basement. He could have really panicked people.”

On March 19th, Trump admitted to Woodward that he wanted to downplay the risk of the virus because he didn’t want to cause a panic. Trump’s hesitancy to address the threat of Covid publically put him at odds with many medical professionals and added to widespread confusion among Americans. Lacking unified guidance, Americans were tasked with determining who to trust and drew vastly divergent conclusions.

“[Face masks are] just a piece of cloth, air does get in and out of it,” Tobias said. “They’re going to see how long they can make you wear these facemasks. They want to see how long the public will put up with it before they revolt.”

According to epidemiologist George Rutherford, the case for masks has been proven by laboratory studies and real world experiments. A study conducted by the College of Public Health at University of Iowa, found that mask mandates caused significant decreases in Covid case rates. After examining 15 states and Washington D.C., it was determined that states with mask mandates saw an increasingly significant decline in case rates over time. But Tobias, like many Trump supporters, believes masks are a waste of time.

“You know, it’s a virus you can’t see, it’s going to spread, no matter what you do,” Tobias said. “I’ll go anywhere without a mask. The problem is, there’s too much false information out there, there’s too many people talking about things they don’t know about.”

But in light of these revelations, many Americans are left wondering if Trump is responsible for the high COVID death counts in the country.

“I think it was responsible to try to protect people from unnecessary panic and fear that might have impeded effective action; but it’s quite another matter to deceive,” philosopher Philip Hogan said. “Deception is a different matter than non-disclosure.”

As of September 19, the U.S. has recorded 198,099 Covid related deaths. The U.S. has surpassed average annual influenza related death rates and the death toll continues to rise. Trump’s early narrative that Covid posed less of a risk than the flu is still circulating. People like Hogan believe it would have been better for Trump to allow experts to do the talking.

“Silence coupled with effective action would have been sufficient,” Hogan said. “The additional step of denying [the threat posed by COVID] is not morally defensible on any grounds. “[Trump’s] responsibility for his moral choices are magnified by his position.”

Whether or not Trump is culpable for the high rate of Covid deaths in the U.S., his early statements about Covid have had a lasting effect on some of his supporters. His efforts to downplay the risk posed by Covid contributed to a wide-spread mistrust of medical professionals.

“We’re just not getting good information, I mean, it’s being manipulated,” Tobias said. “The CDC and the National Institute of Health, this country has been way too politically divided. We better pray that Trump wins.”