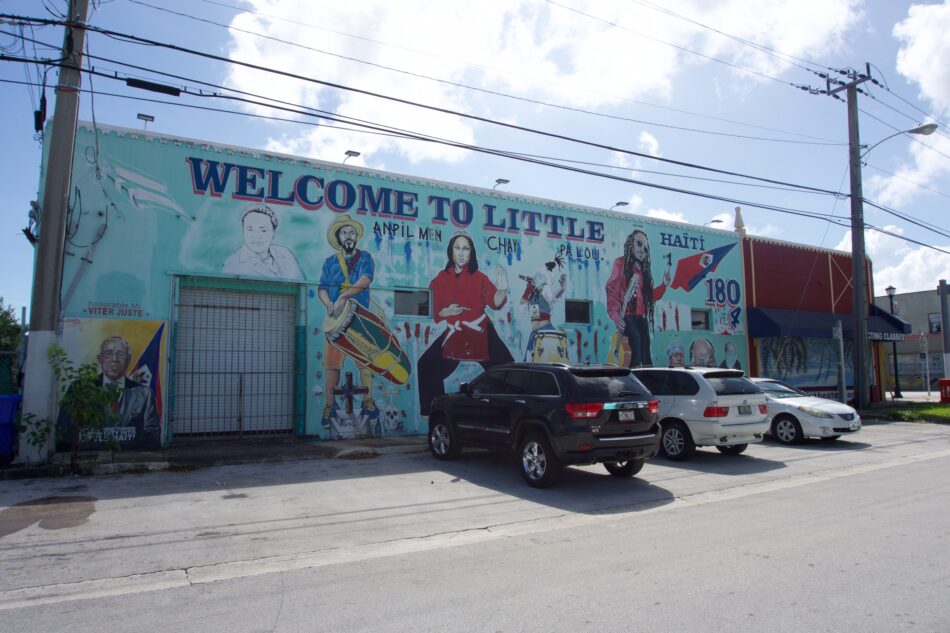 The spirit of Haiti runs through the veins of Little Haiti in Miami. It runs through the narrow streets that are usually full of multi-colored buildings, elderly neighbors chatting in Creole on their front porches, various street venders selling clothes and snacks, and the many restaurants serving diri ak sospwa and banann peze.

A statue of Toussaint Louverture stands tall on the corner of 62nd and North Miami Avenue. Considered a father of the Haitian Revolution, the vigilant figure watches over the now rather quiet neighborhood. Still grappling with rampant gentrification and the coronavirus, many shops have gone out of business, sidewalks are scarcely populated, and the Cultural Complex, the center of Little Haiti’s cultural happenings, remains closed until further notice.

Louverture’s revolutionary bravery often overshadows that of Dutty Boukman – a West African Maroon leader and Vodou priest brought to the shores of the then French colony from Jamaica. On the 14th night of August 1791, Boukman helped lead a religious ceremony, which would ignite the 12-year Haitian Revolution that resulted in Haiti’s independence. Although religious institutions in South Florida have been limited during the pandemic, many of the community’s practitioners of Haitian Vodou continue their reverence.

“You see this, Papa [Legba], he’s the one at the gate, he’s the one that has to let you in for anything spiritual,” explains priestess Marie Lebrun, pointing at a figurine at the front of her store, Twa Zom Fo Botanica.

Haitian Vodou derives from religious traditions of present day Benin, Tobo, and Nigeria, in which followers believe in a supreme creator and many intermediary spirits or deities who influence the facets of human life and death. Through the transatlantic slave trade, these spirits became known as loas and even took on the faces of Roman Catholic saints, as varying African languages, traditions, and spiritual practices merged with those of Europe. This was not only syncretism, but it was also a means of disguise and survival.

“No business from the tourists right now,” says Laider André, Vodou priest and owner of 3×3 Santa Barbara Botánica. “Sometimes you can find 2-3-5, but in the beginning it was a lot – 20, 25. Tourists always come here everyday, and right now, no.”

Botánicas, or shops in which herbs, candles, figurines, and other religious needs are sold, can be found on many corners around Little Haiti. Often playing Kompa or Rasin music on speakers, they attract tourists and practitioners alike.

“We have artisana, we have things people like to buy,” says Lebrun. “Tourists can come buy some stuff. But for the pandemic, we don’t have that many people.”

Lebrun attributes the significant slowing of her small business to a lack of visitors to Miami during these times.

“I’m going to go for the loan, but I haven’t get it yet,” Lebrun says. “Someone start it for me and it was really great, but it was finished when they finished for me. I didn’t get it.”

Both André and Lebrun have been in business for almost 20 years, but during the past six months, some visitors in the community have sought their help for an unusual reason – to combat the pandemic.

“They have been coming for the virus,” says Lebrun. As a Vodou priestess it is a duty of hers to help the sick.

“You have to get blessing hands to help somebody,” she says. “It’s not something you can buy.”

Priests and priestesses, or houngans and manbos are ordained with many roles in their religious communities. They provide herbal remedies, spiritual guidance, lead rituals and ceremonies, and serve as messengers between the spirits and humans beings.

“You have to be gifted from your mom’s stomach before you’re born,” says Lebrun. “When you get a certain age, when they want you to serve, then you start seeing some things. They keep telling you what to do next…until you get there. And when you get to work, they ask you to work.”

With the virus limiting physical contact, houngans and manbos are finding other ways to deliver their messages.

“If you’re meeting with a priest or priestess a lot of things are done via video call or text message,” Vodouist and folkloric dancer Tanayiz Bertrand says over the phone. “Instead of them doing it for you, they give you the instructions on doing certain things for you to do it yourself, and so things are done virtually.”

Bertrand grew up in a household in which both of her parents were professional and folkloric dancers. She says religious group practices have reasonably changed during the pandemic, as group meetings now happen both virtually and partially in-person.

“If I was in a société, in a specific society or spiritual house we would get together on certain days and talk about our experiences and take notes and just talk about our daily life; things that we’re experiencing, anything that we need to learn as far as rituals and what they mean and everything with all the materials that are being used in different rituals,” says Bertrand. “And also history lessons, because in Vodou, even when it comes to folklore dance, there’s a history lesson behind all of these things.”

Music and dance play an important role in Haitian Vodou. Along with offerings and vèvès, or symbols associated with each loa, music and dance are used to invite loas to join rituals and ceremonies via the body of a practitioner. Vodouists believe they may have direct communication through the physical embodiment of a loa.

“If you’re going to a dans, which is a ceremony, you come with your mask on and they limit the amount of people,” she says. “Also there have been times where you probably had to cancel a ceremony.”

“Every morning before I leave my house I jete d’lo or pour libations to acknowledge my ancestors,” manbo and owner of Ayizan’s Corner, Tracy Lotus Badesi wrote in an email. “I continue to pray every day, light a candle in honor of Zanzet Yo (Ancestors) and let them guide my walk through these uncertain times.”